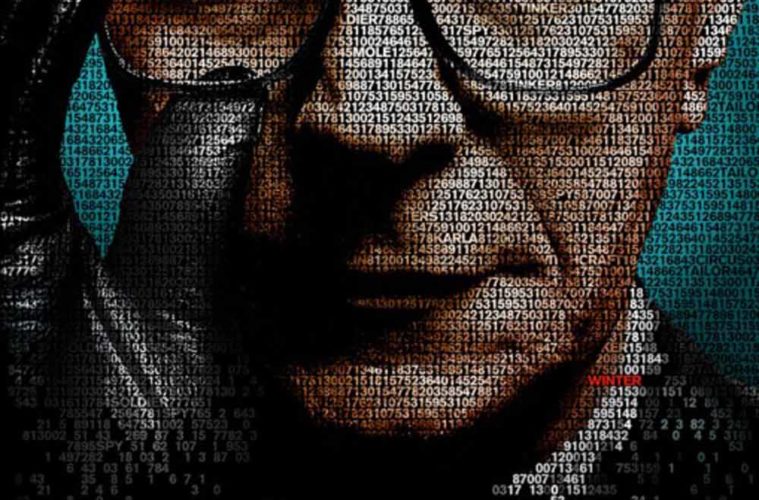 Director Tomas Alfredson, most recently the wizard behind the gorgeous, spookily moving Let the Right One In, takes the concept of slow-burn thrillers to a new level in Tinker, Tailor, Soldier, Spy. Co-writers Peter Straughn and the late Bridget O’Connor tackle John le Carré‘s landmark 1974 spy novel with suave diligence — that the resulting adapted screenplay thoroughly honors most of the source material’s primary narrative strands is an admirably challenging tightrope to walk, and it pays off handsomely. (At times, though, confusion seeps in. I’d read le Carré’s novel beforehand, so I had somewhat of a leg up going in. But, suffice it to say that most viewers will be, at one point or another, working fervently to connect the narrative dots.)

Most importantly, though, the script — and Alfredson’s bravura treatment of it — captures the aura of le Carré’s work. The paranoia, the voyeurism, the quiet, hazy tension — it’s all there. As George Smiley, the weathered, world-weary spy veteran who’s called out of retirement by his British Intelligence superiors to seek out a mole within the system, Gary Oldman defines the film’s effect. He’s reticently observant, never saying a word or making a gesture when he doesn’t have to. In this 1970s, panic-infused backdrop of undercover spies and disguised moles, the slightest tip of the hat can carry profound, far-reaching consequences. Oldman’s Smiley knows this, and shows us by the way he walks through this unbalanced world — always on his tiptoes, looking and listening before taking a step forward.

Oldman is surrounded by a cast that, while shouldering roles with minimal screen time, manages to pepper their characters with acute perceptivity. Judging from the buzz meters out of the film’s Venice debut, Tom Hardy (as rouge agent Ricki Tarr) and Benedict Cumberbatch (as Smiley’s closest partner Peter Guillam) are the generally agreed-upon standouts of the ensemble — and they’re both fantastic. But also developing distinct, memorable personalities are Mark Strong, who is responsible for a large portion of the film’s wounded, heartfelt center, John Hurt as the Intelligence’s former commander-in-chief, and Colin Firth as the flamboyant Bill Haydon.

Above all, the film is a dream playground for the craft departments. Hoyte van Hoytema‘s (The Fighter) dusty, distant cinematography beautifully embeds within the film the visual semblance of a Peeping Tom. Smiley takes every possible precaution to make sure that the conversations he’s conducting are guarded safely by solid, impenetrable boundaries, yet during many of the film’s scenes, the cinematographer’s camera has the scent of an ogler’s chalky, watchful eye. Alberto Iglesias‘ score should be mentioned, too, for its uncanny ability to translate the period’s milieu into musical strokes.

Maria Djurkovic‘s production design, meanwhile, is a master class within itself, and her work often goes seamlessly hand-in-hand with the stunning costume work put forth by Jacqueline Durran (Atonement). This is a film that, from square one, was made with economy in mind. Le Carré’s novel is as dense as they come, and to compress that experience into a crisply measured two hours is a monumental feat that’s made even more difficult by the filmmakers’ unwillingness to burden the film with exposition. The dialogue here is kept to a minimum level, forcing every other aspect of the film — the cinematography, the sets, the costumes — to vibrate with emotional and thematic meaning.

And on that front, the film soars marvelously. To soak in the look of Tinker, Tailor, Soldier, Spy is an experience within itself — fresh, ripe, and exciting. If the screenplay is occasionally bogged down by the difficulty of communicating scattered plot lines, it’s no party-ruining flaw. The film remains an aesthetic, atmospheric marvel. And if you’re worried that the film won’t retain Let the Right One In‘s subdued sense of horror, leave your concerns at the door. Alfredson bookends the film with two silently chilling acts of violence that immediately recall the exquisite onslaught that concluded Alfredson’s previous picture. The Swede directs this film like a tamed beast — subdued and controlled, but always threatening to attack with fervor and rage.

Tinker, Tailor, Soldier, Spy is in limited release and is currently expanding (click for roll-out schedule).