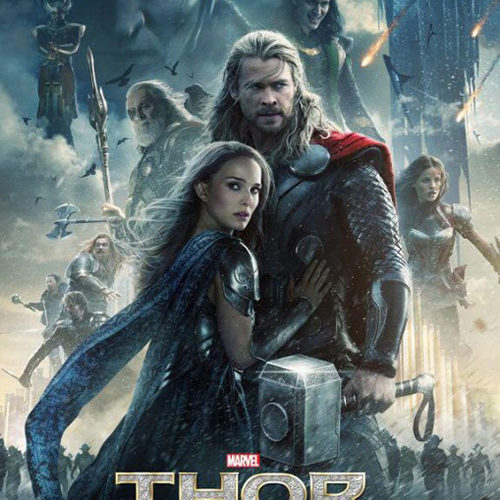 There was something off with 2011’s Thor: while many believe Iron Man 2 was nothing but an evolutionary bridge for its hero to move closer towards what The Avengers needed, it was actually the Norse God of Thunder who provided the most obvious bit of prequel exposition by introducing himself, extraterrestrial life, and that forthcoming blockbuster’s main villain, Loki. Captain America: The First Avenger brought us a new character’s origin, yes, and at a later point, but his story — like Tony Stark’s — dealt with a metamorphosis this Shakespearian blonde never had to experience. Thor is a God whose heroic might is a birthright and not acquired through science fiction trappings — so, rather than feel like we met him in that first film, he became more the byproduct of a plotline necessary to Marvel’s “Phase One” endgame.

There also lies the issue of Thor’s (Chris Hemsworth) forays on Earth being the most outlandishly comical of Marvel’s stable, his fish-out-of-water presence mostly played for the laughs typical and expected of that subgenre. So, how would Thor: The Dark World writers Christopher Yost, Christopher Markus, and Stephen McFeely (retooling Don Payne and Robert Rodat’s original script versions), alongside director Alan Taylor, take it to the next level without getting mired? Loki (Tom Hiddleston) already exposed Earth to the destructive power that otherworldly beings possess, the Tesseract’s arc found completion, and Iron Man 3 showed the psychological toll our Brave New World took on mankind. The second Thor film was thus poised to give those ramifications a universal scale, while proving its titular hero was more than just a pontificating, short-tempered, ego-driven pretty boy.

And while I do believe that Thor: The Dark World succeeds on this front — with Thor at a crossroads between his Superman-esque role on Earth and his throne above Asgard and the Nine Realms — it still unavoidably serves as the Marvel Cinematic Universe’s main conduit to the supernatural. With films like Guardians of the Galaxy and villains such as Thanos coming down the line, the studio needs the Thor franchise to bring their inherently impossible dangers into our own world; because of this, I’m not sure Thor can ever truly find a standalone arc that doesn’t end up being at least three-quarters connective tissue for what’s to come. The true test for Taylor and company, then, becomes whether or not they can dress those far-reaching expositional plot points in an entertaining-enough light for the characters currently onscreen to flourish.

So, while we couldn’t care less about the wars breaking out across other realms after the Bifrost was destroyed and Asgard got knocked down a peg, we know these ancient planetary beefs will be crucial to where Thor and his “team” go next. And just because a race of dark elves led by the evil Malekith (Christopher Eccleston) provides a formidable foe for Odin’s heir to embark on a tenuous truce with power-hungry and homicidal brother Loki, audiences still need Earth to give a fixed point and not drift away into comic book waters way beyond their already strained suspension of disbelief. It’s therefore no surprise that the malicious and fluid parasitic power called the Aether (which Malekith seeks to darken our worlds with) finds its way inside Thor’s earthling girlfriend, Jane Foster (Natalie Portman).

Thus arrive the obligatory flashback to Odin’s (Anthony Hopkins) father Bor, and his defeat of Malekith generations previous; the Aether’s supposedly infinite imprisonment; and the present-day human activities of Jane, Erik (Stellan Skarsgård), and Darcy (Kat Dennings) discovering anomalies in the fabric of London’s dimensional space. Jane falls through a portal, brings the Aether to Earth, finds a worried Thor waiting, and is taken to Asgard to figure out what’s happening when Malekith crashes the party with a wrath so potent that stopping him and his indestructible Kursed warrior (Adewale Akinnuoye-Agbaje) doesn’t seem possible. Thor’s love is put to the test when saving the woman he cannot stop thinking about becomes the only way to also save the worlds he was born to protect. In short, this is the fight that will give him his identity.

That said, the actual plot behind those actions leaves little room for the unknown. In a very manipulated series of events occurring with careful succession, only overwrought handwringing and embellished ideas of treason try to mask its obvious contrivances. But just as such a truth ensures The Dark World’s legacy as merely one more tiny piece to the grand puzzle that is The Avengers: Age of Ultron, it still provides Marvel a second opportunity to breathe life into an Asgard more “real” than Kenneth Branagh’s colorful shine. Taylor welcomingly injects his vision with the aesthetic gravitas he used on Game of Thrones by giving it a more palpable sense of danger, complete with antagonists worthy of Gods. As a result, this film is at its best when away from Earth on mysterious planets full of imagination.

The Warriors Three (Ray Stevenson’s Volstagg, Zachary Levi’s Fandral, and Tadanobu Asano’s Hogun) and Sif (Jaimie Alexander) get to fight deserving foes instead of just running from The Destroyer; Heimdall (Idris Elba) shows his strength beyond his duty as all-seeing gatekeeper; Malekith’s elves possess cool weapons and spacecraft to intrigue beyond the first film’s Frost Giants’ penchant for frostbite; and even Rene Russo’s Frigga gets to be a bad-ass. Stakes are certainly raised, and the psychological grief of New York City shown in Iron Man 3 is matched as Asgard proves comparably ravaged. One could say this installment levels the playing field by forcing us to realize no one is immortal and the evil forces at work affect us all; the Gods, oftentimes, are just as helpless to nightmarish hells as we. This is a crucial point for Marvel to ensure we don’t grow complacent with the Universe’s escalation away from the science fiction instilled by The Incredible Hulk and Iron Man and towards Thor‘s full-fledged fantasy. Anyone can be hurt or killed and nothing can be held sacred if we are to continue coming back for more. So while Skarsgård and Dennings combat the heavier tone with some loud guffaws and Hiddleston steals the show — like always, with his knowing smile (and help from a brilliant cameo) — it’s Eccleston’s unwavering, villainous commitment to destroy and earn the Gods’ fear that allows Thor to grow into the hero he must become. And while his journey may be the weakest of the Avengers’ tales — this entry nevertheless improving upon the first — it remains essential to the context of the whole.