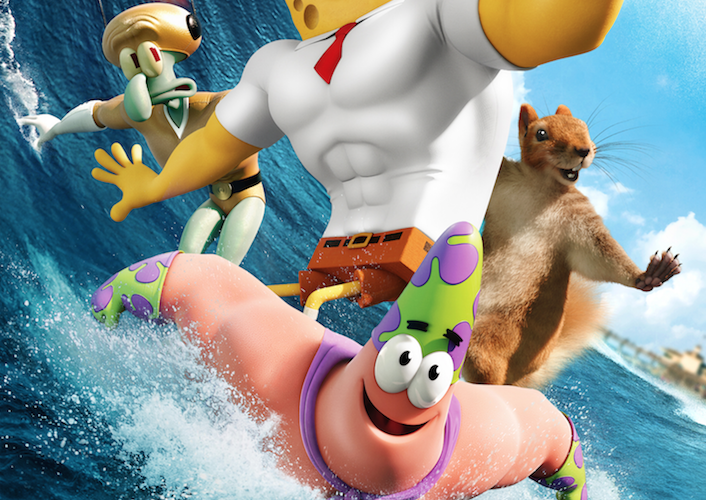 [Review] The SpongeBob Movie: Sponge Out of Water

Delightful and funny in a cheesy, silly way, The SpongeBob Movie: Sponge Out of Water is a kind of cinematic sugar rush. While, like a Krabby Patty, not entirely nutritious, it’s thoroughly delightful in its zany relentlessness. Taking place largely under the water in the hamlet of Bikini Bottom, an external force, Burger Beard (Antonio Banderas) aspires to control the world via his food truck and the secret Krabby Patty formula served up at the Krust Krab. Garnering more attention than Shake Shake’s recent IPO, he succeeds. Stealing an ancient book from a deserted island, he’s able to manipulate the narrative of Bikini Bottom by simply rewriting any page he wishes. And those kids from Project Almanac aren’t around to stop him.

Stealing the mysterious Krabby Patty formula on land leads to dangerous consequences in Bikini Bottom as the formula is stolen and then vanishes. With customers out the door and no Krabby Patty’s left, our hero Spongebob (voiced by Tommy Kenny) and rival Plankton team (Mr. Lawrence) team up, building a time machine leading to various misadventures in the future. Luckily their consequences are not so disastrous, including a chase encounter that proves dolphins really are a superior species. As for SpongeBob, we’re treated to the inside of his brain in one of the film’s funniest sequences, one I think even Willy Wonka would be horrified by, which includes a tribute to The Shining in ice-cream bar form.

Constantly reinventing itself, the film looses a little steam when it finds itself on land in the third act. Delightfully it remains under the sea for much of its running time; it’s mostly a zany cartoon with much of the action happening in Bikini Bottom, even if the place is falling apart. Bright, colorful and fun with lots of cheesy jokes, the hand-drawn animation (directed by Paul Tibbitt) delivers exactly what SpongeBob fans would expect, bringing the gang together for a big adventure/showdown before the hybrid live-action scenes. Less successful are those, directed by Mike Mitchell, director of that other nautical CGI cartoon adventure: Alvin and the Chipmunks: Chipwrecked. These sequences deliver exactly what you’d expect and despite the technical achievement, are far less interesting than those establishing social order down in Bikini Bottom.

With Banderas as an unlikely villain in on the absurdity of the thing (right down to his last moments on screen) the film functions on its own strange internal logic. I suppose you can just go with it and enjoy yourself. I suspect its target audience will have a good time and I did too, even if it started to wear out its welcome as it evolved towards a live action/CGI hybrid. Unlike another kid-friendly action flick featuring a civilization about to fall, the near-masterpiece that was The LEGO Movie, this picture offers a less rich experience. Like SpongeBob, it has sweets on the brain, with a sugar high that delights, and at 93 minutes, it stops just short of giving one a cinematic equivalent of a diabetic coma.

The SpongeBob Movie: Sponge Out of Water is now playing in wide release.