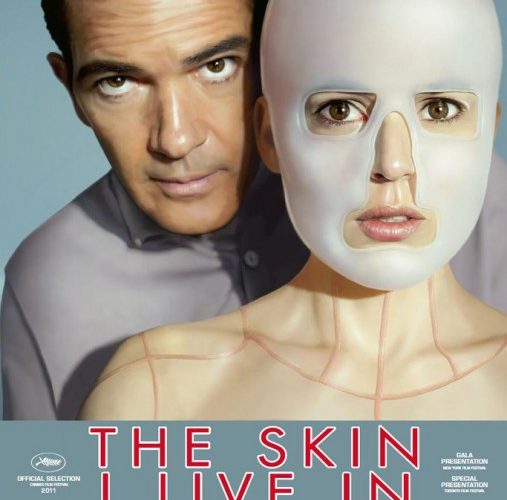 [Review] The Skin I Live In

You may have noticed a veil of intrigue and mystery has persistently clung to Pedro Almodóvar’s latest effort The Skin I Live In. The drama’s promotional poster is arresting and strange, but gives little away; and its amorphous trailer teases striking visuals, promises appearances from such recurring Almodóvar collaborators as Antonio Banderas and Marisa Paredes, but dedicatedly avoids displaying its plot. Even the critics I spoke to beforehand were eerily vague on what seemed to be the simplest of details, namely: What’s it about? So as I eagerly settled into my seat for one of my most anticipated NYFF screenings, I was curious to see where Almodóvar’s latest venture would take me. And as a large part of the film’s impact on me was based on my lack of information beforehand, I am going urge you to see this remarkable film while revealing as little as possible about its puzzle-like plot. To that end, the review below will reveal even less than the film’s trailer. The Skin I Live In begins with a mysterious women, imprisoned in a boldly glamorous house, yet adorned in only a custom fitted flesh-colored bodysuit. Isolated but always under surveillance, this elegant captive (played with precision and passion by Elena Anaya) practices yoga and creates sculptures with scraps of fabric and clay. Cut to: a handsome but cold plastic surgeon played with ferocious restraint by Banderas. He’s before a captive audience delivering a lecture about the development of a genetically enhanced skin that would protect humans from the violence the world inflicts. These two disparate characters are the base of a heady and complicated narrative that will unwind in a riveting and wild journey over the next 117 minutes. To call it a twisted tale is an understatement. Based on the novel Tarantula by Thierry Jonquet, The Skin I Live In is a story so gnarled and shocking it leaves the audience in stupefied awe as the credits roll.

While invoking themes of gender, sex, violence and identity — each recurring motifs in Almodóvar works — the director dazzles moviegoers with captivating visuals, haunting constructions, and a lilting but dark soundtrack. Basically, Skin fits well with his other works. It’s a decadent feast for the eyes, lush with intricate and allusive set design, from the eye-catching paintings that adorn the walls, to the meticulously detailed costumes (designed by Paco Delgado with help from Jean Paul Gaultier) to the breathtaking shot compositions that juxtapose characters in telling blocking with a lavish and dreamlike color palette that suggests a volatile environment where dangers lurk and nothing is as it seems. Of course Almodóvar has long been praised for his visual flare, but here the auteur willfully pulls back on his cheeky sense of humor to create his most harrowing film to date. Herein lies no campy performances or saucy nuns. Instead, Almodóvar fuels his melodrama with an influence new to his blend of high and low brow elements: horror. While The Skin I Live In isn’t exactly a horror film, this psychological thriller pulses with the energy of some of the genre’s most heralded entries. The sense of danger and the threat of blood practically radiates onscreen as Almodóvar’s cast of deeply flawed figures collide in more and more anxiety-inducing ways. In this way, it reminded me very much of my favorite film from last year, Black Swan. Here a quest for identity fractures the world around its central characters, creating a many-layered opus that is guaranteed to puzzle and provoke audiences for decades. Packed with powerful performances, unforgettable visuals and a plot that’s titillating, terrifying and thought-provoking The Skin I Live In may well be Almodóvar’s masterpiece.