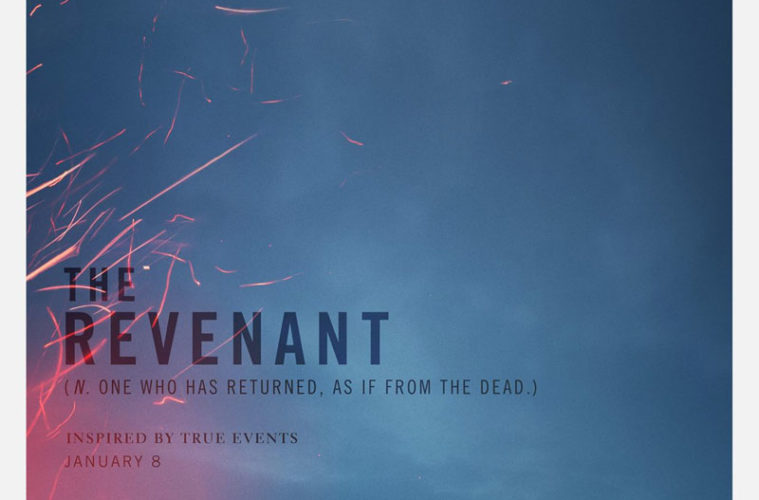 After (mostly) constricting themselves to the confines of a single building in Birdman, director Alejandro González Iñárritu and cinematographer Emmanuel Lubezki have ventured deep into the great, savage outdoors for The Revenant. Its roots are in a classical revenge / survival story, and its unrelenting brutality swallows emotion at every turn. Yet thanks to Lubezki’s idyllic touch and Leonardo DiCaprio‘s tenacity in enduring anything thrown at him, the film remains compelling in its grand scale and near-comical excess.

The Revenant, set in 1823 and loosely based on a true story, follows fur trapper Hugh Glass (DiCaprio) as he helps lead an expedition of a few dozen men, whose camp is attacked by a group of Native Americans. With a handful surviving, including Glass’ half-Native American son, noble leader Andrew Henry (Domnhall Gleeson), the unseasoned and eager Jim Bridger (Will Poulter), and Tom Hardy‘s John Fitzgerald — a heartless Texan whose balding head displays an unsuccessful, but evidently painful scalping attempt — they push forward into the great unknown.

Isolated and ahead of the pack, Glass encounters two bear cubs — but soon their mother appears, leading to an extended and particularly brutal mauling that results in our lead being reduced to disfigured shambles. With Fitzgerald wanting to leave the man for dead — as trekking him on a homespun cot will hamper their expedition’s progress — Henry refuses, offering money for him and Bridger to stay back and care for him. Without revealing further plot details, bloodthirsty greed crops up and DiCaprio’s Glass is set on a mission of revenge, but first he must rebuild himself. Abandoned in the untamed wilderness, he not only faces those who betrayed him, but the aforementioned Native Americans, who are tracking down Powaqa, a woman from their tribe captured by a group of competitive French frontiersman.

Endeavoring to give an emotional backbone to the vicious, lonely journey, hollow flashbacks give us visions of the murdered Native American mother of Glass’ child. As in Iñárritu’s Best Picture winner, the script — co-written with Mark L. Smith, and based on Michael Punke‘s 2002 novel — presents metaphysical elements, showing the woman floating in a serene field. This is accompanied by crashing meteors and a pyramid of skulls, seemingly representing the wholesale massacre in these territories, but the visual signifiers are little more than momentary diversions, never genuinely giving a poignant pathos to Glass’ psyche.

Even DiCaprio’s mostly silent performance, while undeniably grueling, offers little range or depth. As he endures a series of accumulating, arduous events in which his body and mind are stretched to their utmost limits, we’re kept at an emotional distance from the suffering. During his final bouts of drastic perseverance, there’s an almost humorous side to the desperation — as if we’re watching a cartoon character continually one-up the level of agony he’s experiencing. Like most underdog stories, it can be gripping to witness DiCaprio’s Glass return to his feet, yet one feels more of a connection to what the environment might offer next than any affection for his character.

Lubezki is, again, irrefutably the star of this production, capturing the unspoiled backcountry with a brisk, arresting touch. From the first action set piece, we’re immersed in the feral surroundings. A calm, patient shot moving across a brook, presenting the title, and curving up to Glass on the hunt serenely places us into his environment. When transitioning back to the camp, we meet only a few of the frontiersman in an unbroken take before an arrow bolts out of the woods, striking a man through the chest. Native Americans descend down from the hills surrounding the camp, with Lubezki’s camera hovering in and out of trees and freshly deceased bodies during the clash. In this thrilling opener, one is struck by the rare level of scale and immediacy on display.

Thanks to Lubezki’s contribution, there will undoubtedly be comparisons to Terrence Malick’s style, but aside from a few sequences — notably when a dying breath transitions to the billowing clouds, then back to the chilly exaltation of Fitzgerald — Iñárritu fails to establish a spiritual rhythm in his odyssey. The aforementioned inclusions of visions and flashbacks detrack from the fairly simplistic drama, adding an existential angle that feels more muddled and unsatisfying than genuinely affecting.

This is not to say Lubezki doesn’t bring a majesty to the frame; the majority of shots — from vast vistas of snow-touched mountains to torches illuminating the darkness of a forest — are jaw-dropping. There’s even a glimmer of subtle optimism in visual cues, such as light peeking through the background in a moment of ultimate retribution. In a less-than-subtle moment, Glass tranquilly observes a pack of bisons, then a group of wolves ripping one apart — a pat visual metaphor for the slaughter of the indigenous people.

The graceful score, a collaboration between Ryuichi Sakamoto (Babel, The Last Emperor), Alva Noto, and The National’s Bryce Dessner, segues from heavy drums to a reliance on strings — fittingly, as the story progresses from external forces to primal instincts. As this evolution becomes clear, it’s evident that the film is at its most dramatically effective in this more elemental key.

While DiCaprio is relegated to crawling and wailing for much of the film, Hardy, unlike his blockbuster turn in Mad Max: Fury Road this past summer, bears the majority of the dialogue. While, with a gruff Texan accent, his villainy can occasionally feel one-note, his brutish nature is a worthy opponent for Glass. And although most other characters leave less of an impression than the bear that lacerates Glass’ throat, they feel authentic to the place and time. One particularly wishes there was more of Gleeson’s stoic Henry, who is sadly relegated to an exceedingly manipulative arc.

Mishandled flashbacks and emotionally detached narrative notwithstanding, The Revenant mostly pays off with its sheer scale and uncompromisingly somber tone. Iñárritu’s habitual overindulgences prove he’s no Werner Herzog — a director who can masterfully grasp and wrestle with the psychological and physical toll of nature’s mysteries — but the fact that one can enter a theater on Christmas Day to see an immaculately lensed, large-scale, and defiantly heartless endurance test is recommendation enough.

The Revenant will open in a limited release on December 25 and expand wide on January 8, 2016.