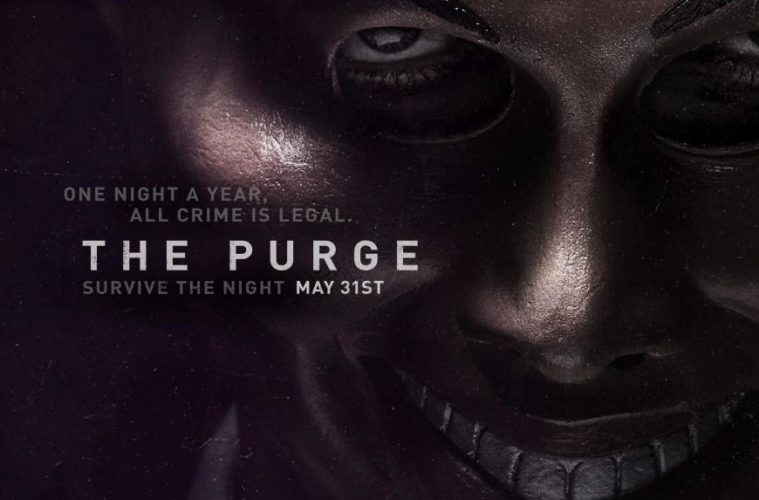 What happens when the walls of social obedience fall and human beings find themselves encouraged to indulge their baser, more destructive natures? A philosophical chestnut beloved by speculative fiction writers the world over, that question becomes the driving force behind James DeMonaco’s new sci-fi thriller The Purge. Although the trailers are selling it as a grim home invasion flick, the film itself plays more like Rod Serling meets John Carpenter, provoking thoughts at the same time it breaks bodies in the name of entertainment.  Critics who often howl at the empty-headed brutality of most modern horror films may find themselves perplexed by The Purge; it builds its action off an original idea, considerably limits the vile potential of its premise, and somehow, still remains as steadfastly silly as its less ambitious brethren.

In fact, how much you end up enjoying The Purge will be directly related to how willing you are to accept its ground-level conceit; that a brief decade from now, America will participate in a government-sanctioned ‘purge’ night, which allows all citizenry a full evening of indulging in criminal activity, as long as low-range weapons are used and governmental figures are exempt from targeting. Thanks to the “New Founding Fathers,” who use the Purge to balance a severe conservative regime, crime is way down the other three-hundred-and-sixty-four days of the year and the economy is soaring. Part of this is easily explained by the nature of this world, which has developed so that rich yuppies can protect themselves within state-of-the-art fortresses (going out only to victimize if they so choose) while the poor—and particularly the homeless—have fewer means of preservation, and gradually begin to unburden the country with their non-existence. While there are logistical holes all around this premise, I found the concept interesting enough I was willing to play along. Once you arrive there, The Purge is a fast-paced, blunt-force journey into one hard night. Although there’s a harrowing and tantalizing prologue depicting video footage of nation-wide implementation of the purge, DeMonaco chooses to limit the scope and footage to one particular—and priveledged—family ,The Sandins, whose grueling experience over the next twelve hours is the meat of the film. James Sandin (Ethan Hawke) is the patriarch, who’s made a good living from security systems, now a necessity for the wealthy in a purge-sanctioned world. When the infamous time window closes, James is sealed up in his lavish, fortified home with his wife Mary (Lena Headey), stand-offish daughter Zoe (Adelaide Kane), geeky son Charlie (Max Burkholder) and Lena’s persistent boyfriend Henry (Tony Oller) who has more-or-less stowed away for the night.

The elder Sandins view the Purge as a necessary evil, one they do not partake of themselves but happily ignore to sustain their way of life. All of this changes when Charlie expresses compassion and opens up the barricades to let a homeless war vet (Edwin Hodge) inside so he may escape the hoodlums pursuing him. Now, that gang of frenzied, high-society kids are doing their best to infiltrate Casa Sandin while their eerie figurehead, the snaky-sinister Rhys Wakefield, delivers chilling ultimatums from the security cameras on the front stoop. As the night progresses, James and his brood will confront their own ideals and understanding of morality, making sacrifices and giving up their illusions along the way. DeMonaco keeps the movie humming along with a stripped-down intensity that rarely lets up, and his fine set of actors distract from the more routine passages in The Purge’s more pedestrian final third. A large part of why The Purge works as the thriller it wants to be is thanks to Hawke and his portrayal of James. Once the film begins to trade-up the social science fiction for a Straw Dogs-esque confrontation, it’s important that James and his brood channel realistic survival instincts. Hawke takes a protagonist that is neither hero nor villain on the page, and makes him a believable family man whose complicity with the Purge has never been questioned until now. Like he did with Andrew Niccol’s Gattaca, Hawke internalizes the implications of this alternate reality and makes the world more real by displaying its effect on the characters. Headey matches Hawke’s James with a maternal figure that must weigh the instincts to protect she and hers with her own shelved morality. Burkholder and Kane get some very effective moments too, and together these four characters form a realistic family bond that we can relate to, and which engenders thrills when the bad guys show up.

Those bad guys, for the most part, are unfortunately generic, and when they wander the shadowy halls and rooms of the Sandin home, they become interchangeable masked opponents. DeMonaco, who wrote the modestly effective Assault on Precinct 13 remake, understands this imbalance and has given us Wakefield as the sneering, Alex Delarge clone who lends voice to the movie’s more overt social critiques. Wakefield really comes to the fore in The Purge, and while he’s not as imposing as he could be (he’s mostly taunting from the cameras) he makes his smiling psychopathic a convincing creation. Edwin Hodge’s fearful veteran could be a flat symbolic character, but the actor squeezes plenty of empathy out of him, and it seeps out to the surrounding Sandins who slowly thaw over the course of the film. DeMonaco is a good director and his stylistic inflections keep the fear and excitement running once the attackers are in the house. He also manages to isolate and enlarge the overarching fable aspects of the premise as the cat-and-mouse game plays out. Too many of these scenes involve other characters wandering up and subduing others, but there’s a conflict between James and a few of the assailants that may be the best set piece in any of these Blumhouse productions. The twists that develop as the movie proceeds are reasonably hard to swallow, and ultimately the thriller conventions that overwhelm the second half keep it from being the intelligent creep-fest that the early sections promise.

Despite its flaws, and sometimes limited focus, The Purge is still an intriguing and enjoyable thriller that works best in the moment, but leaves some tantalizing questions in its wake. You may find yourself surprised to walk out thinking about the ways in which complicity with evil can be easier than struggling for good, instead of trying to puzzle out who has to collect all those bodies when the Purge is over.

The Purge opens in wide release on Friday, June 7th.