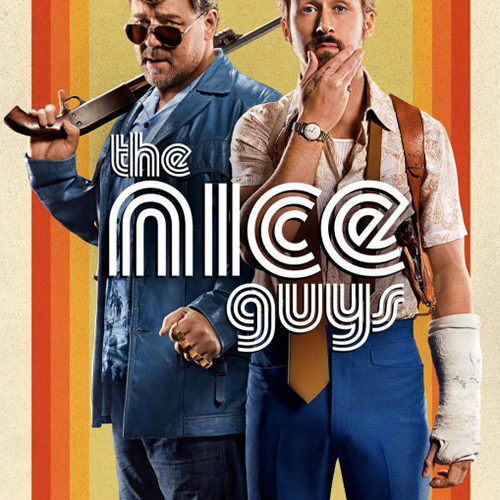 It’s been over 40 years since Chinatown, and roughly the same amount of time separates the events of that film from those of The Nice Guys, another tale of a private detective in Los Angeles taking on an initially simple case which leads him to a vast, environmentally centered criminal conspiracy. The Nice Guys even carries on Chinatown’s heartbeat of individual helplessness when confronted with the casual body disposal of profit-hungry industrialists. So, too, does the movie bring the sensibility of its time to its throwback setting — while Chinatown’s L.A. is a distinctly ‘70s landscape of grim stoicism, The Nice Guys‘ L.A. is suffused with nearly as much irreverent contemporary irony as it is smog. The 1938-set Chinatown is a more faithful reflection of the city in the ‘70s than the 1977-set Nice Guys. It’s particularly appropriate that, in the new film, we aren’t even really looking at L.A. at all most of the time, but rather a skillful artifice fashioned out of Atlanta.

The Nice Guys opens with enforcer-for-hire Jackson Healy (Russell Crowe) narrating his consternation over “kids these days” being too worldly for their own good, and the plot proceeds to lead him and private detective Holland March (Ryan Gosling) after a trail of bodies left by the criminal ruckus over a few young people who have gotten in way over their heads. When the unlikely pair (is there any other kind of pair in a Shane Black story?) observe a poorly-thought-out student anti-pollution protest with bafflement, it feels more like a commentary on the activists of today. But despite such wry ribbing, The Nice Guys has more respect for the youth than not. After all, those protesters are dead on (as opposed to everyone in the film who ends up just dead) about the city’s dire smog problem, which turns out to be the main concern of the aforementioned villainous plot — shifting from Chinatown’s focus on water to the air. And then there’s March’s preteen daughter, Holly (Angourie Rice), who emerges as both the film’s moral center and best character.

Black has a talent for writing kid tagalongs who are intelligent without being insufferable, funny without being cloying, and imperiled enough to keep a film’s energy from feeling too diluted by their presence. Holly is all of these, and also a major buffer against Black’s less-fortunate tendency to, frankly, write women in a really, really weird way. That’s still present to a degree, mainly in a fascinatingly tortured push-pull between the script “knowing better” and still indulging itself. There’s an oddly sweet scene in which an adolescent boy symbolically redeems his demographic’s objectification of women by respectfully covering a porn star’s exposed body after she dies, but that doesn’t quite excuse how the movie regardless presents the hoary cliché of the nude female victim in the first place… also, why was she even driving a car naked to begin with?

Anyway, Rice is great, and great with both leads, but that isn’t to say that they can’t make do on their own. Crowe’s nasally American affectation and sour resting face suits Healy’s straight man perfectly, while Gosling turns in the best performance of his career so far as the buffoonish, often-drunk March. The duo’s swearier Abbott and Costello routine is an endless riot, fueled mainly by Gosling’s full-bodied nervy cowardice. His high-pitched girlish scream is ever so beautiful.

The buddy PI aspect is the chief narrative distinction between this and Chinatown, and at the core of where it diverges philosophically from that movie. In the ‘70s, a man was on his own to despair before the moral void of the world. Today? Hey, find yourself someone who’s got your back, and the two of you can crack wise about it together! Which leads us to how The Nice Guys is obviously also way, way funnier. This isn’t merely because of Black’s renowned penchant for quips and wry undercutting of cliches. (The Nice Guys is far less overtly “meta” than Kiss Kiss Bang Bang, keeping most of its winking to lampshade-hanging on film conversation tropes like long-winded parables used where a simple statement would do, rather than on storytelling convention.) Half of the best gags in The Nice Guys are of the physical variety. Some of the action scenes escalate into full-on live-action Looney Tunes madness. A man falls off a roof and literally splats as he hits the ground. Character’s faces connect with heavy objects to the accompaniment of honest-to-god CONK sound effects, which is objectively among the funniest things in existence. The finale features a madcap Keaton-esque dash after a runaway film reel in which Gosling is repeatedly struck by the same car. And rounding all of that out is a sophisticated string of purely visual gags, such as a beat involving a troublesome lighter and a dead body that’s both a great punchline and an effective jump scare.

The Nice Guys premiered at the Cannes Film Festival and will be released nationwide on May 20. See our coverage below.