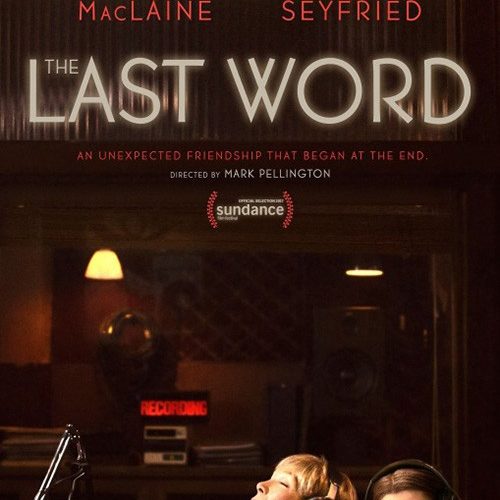 Review: ‘The Last Word’ is a Pleasant, Predictable Sitcom

Harriet Lauler is not a nice women. Taught to be pushy and proud in her days leading an advertising agency in a small California town that still has a daily paper, like much of the town — which also includes a hip indie radio station — she is a dying breed. Beat by beat, though, Lauler (played by the stellar Shirley MacLaine) “evolves” in Mark Pellington’s predictable dramedy The Last Word. Cinematic comfort food comes to mind, and rest assured, mom and grandma will probably have a nice time.

The story features a bit of darkness as Lauler, an intentional women whose gardener and stylist aren’t doing things to her liking (she’s proud enough to rip the clippers out of both of their hands), decides to control her death. No such luck as she overdoses, only to find the obituary of an old nemesis covered in red wine. This brings Harriet to the local daily paper, an institution struggling in the digital age and the unexpected friendship of Anne Sherman (Amanda Seyfried) a millennial skating by as an obit writer. Impressed by Anne’s writing, the control freak provides her the names of her close associates – friends, business partners, her priest, and gynecologist – and surprise: they all hate her. (Although I’d argue her stubbornness is somewhat endearing.)

Far less interesting than Richard Linklater’s stranger-than-fiction Bernie (another cross-generational buddy movie where MacLaine plays an unpleasant well-off women), The Last Word ties up all of its loose ends beat by beat and leaves no character without a pay-off. Lauler struggles to rewrite her life in her last few weeks in two rather predictable ways: she takes a young, black “at risk youth” in as her intern and she joins the local freeform radio station as a DJ after impressing station manager Ron (Tom Everett Scott) with her knowledge and vinyl collection. Apparently they don’t play by the WFMU’s rules, where — as documented in the quirky documentary Sex and Broadcasting — even a member of the Beastie Boys has to do his time in the mailroom before he can get on air. It doesn’t backfire, even if they run the risk fictionalized in Welcome To Me, where an ill woman is taken advantage of institutions benefiting from her financial sponsorship.

The adoption of Brenda (AnnJewel Lee Dixon) after Lauler decides “at risk” is a quaint term – after all, if you’re not at risk, you’re not really living (easy for a rich white octogenarian to say now) – is one of the film’s more paint-by-the-numbers moments. They both learn something from each other as Brenda captures Harriet’s heart after she rearranges the library in defiance of the age-old Dewey Decimal System — don’t worry, even this quirk is paid off later.

The Last Word is pleasantly inoffensive enough, but well runs its course at 108 minutes. While Pellington brings his signature style to a pedestrian story, Stewart Ross Fink’s weak screenplay fails to subvert the sitcom genre norms and tropes. The film’s unexpected R rating for a few uses of the F-word is about as edgy as The Last Word gets, despite a stellar cast and some genuine joy in a few strong scenes. (A reunion between Harriet and daughter Elizabeth, played by Anne Heche, is a terrific stand-out). Otherwise, everyone gets what they strive for in the end, which I suppose is the definition of a feel-good film, but the path to that end is predictable, even when Harriet and Ann try to break out and be anything but.

The Last Word is currently in limited release.