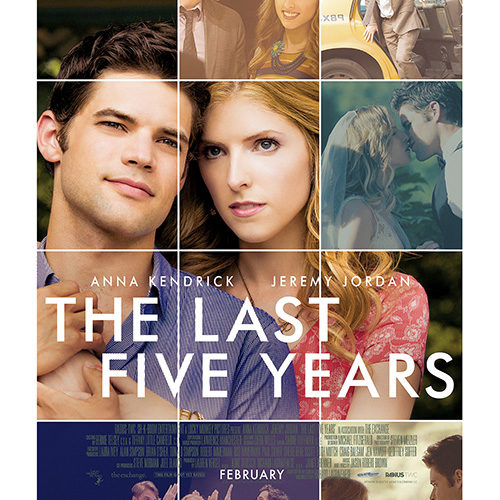 I wanted to blame The Last Five Years‘ failure on the original musical’s creator Jason Robert Brown since director Richard LaGravenese and cast can only do so much if the material is lacking. But then I learned about a huge structural detour that occurred during the adaptation process. Whereas the off-Broadway show consisted of solos—Cathy’s (Anna Kendrick) beginning with the end of their relationship intertwined with beau Jamie (Jeremy Jordan) from the start, meeting just once at the midpoint’s wedding—the film delivers each event as a duet. Then, out of the blue, the finale confusingly reinstates the dueling format. It, along with many awkward transitional jumps, could have made much better sense if LaGravenese kept Brown’s framework intact. However, while this alteration proves detrimental to the movie, I can’t imagine Brown’s misguided romance works onstage regardless. The reason is simple: he’s crafted a love story so rife with cliché and stereotype that I was completely disinterested in the central break-up of two people I despised. I feel sorry for Brown if this is actually his jaded idea of love, but he writes Jamie as an egotistical wunderkind author so self-absorbed that every song he sings concerns himself. Even when trying to tell his wife about her greatness, he pats himself on the back by saying “I believe in you.” Jamie is her champion, her savior. He apologizes for not being able to “rescue her” when her happiness fails. Showing no remorse for his infidelity—fantasy or otherwise—he blames her for forcing his hand.

But Brown isn’t done there. It’s not enough to write his stand-in as a prick always finding a way to make conversations focusing on Cathy’s well being about Jaime. He paints her as a pushover devoid of self-esteem who shrugs off professional shortcomings because she still did good in choosing Mr. Right. Sorry, Cathy. You didn’t. Not even close. She belts songs yearning for our pity, desperately attempting to project herself into Jamie’s success despite him keeping her at arm’s reach. And when she finally works up the nerve to call him on his bullshit, he spins the blame her way. Brown therefore epitomizes everything wrong with naively idyllic young people immortalizing love as a bread-winning husband with a cheerleader back home. He’s providing a shining example of lust’s ability to fool us into feeling joy.

It wouldn’t be bad if he were doing it as a cautionary tale. That’s not how it plays, though—at least not the cinematic version. No, The Last Five Years instead plays itself off as an insightful look at the deconstruction of a relationship as generic and relatable as possible. It’s almost like he expects every guy in the audience to see himself in the vain, demanding prima donna screaming in anger at a wife who’s sick of being treated like a glorified secretary in tow. Every girl apparently gazing into a mirror at the love scorned puppy getting kicked and kicked again yet still melting to the charms of the lucky catch she can call her own. Call me overly dramatic if you want, but this type of thinking sets gender equality back decades. In the real world this pairing would have dissolved Year One. From Jaime devoting an entire song to the fact his mother is going to be super pissed he’s schtupping a shiksha to Cathy deluding herself into accepting a reality where she’ll always be second fiddle to his ambition because he’ll still be hers, the entire basis of their union as drawn onscreen revolves around surface appearances. Another tune describes Jaime yearning for all the pretty women throwing themselves at him now that he’s married with a woe-is-me tone begging for masculine sympathy as if keeping his pants zipped puts him on the fast-track to sainthood. If you’re going to be so cavalier with gender tropes and hope to not exacerbate their simplistic views on a complicated world, you must at least give your characters emotional growth.

I guess that was too difficult or not the plan because after everything that happens to drive a wedge between these supposed lovebirds, she can’t help but miss him and he can’t help applaud his leaving her out of love. Are you kidding me? It pains me to say anything nice about Kendrick’s performance or Jordan’s charisma because the message they’re delivering is so damaging to impressionable kids eating this should-be extinct view on life with a spoon. Every step of the way we’re meant to hold him as a hero and she the damsel he’s elevating to unimaginable heights by his presence. The whole thing is so smug that everything it does well is instantly ignorable.