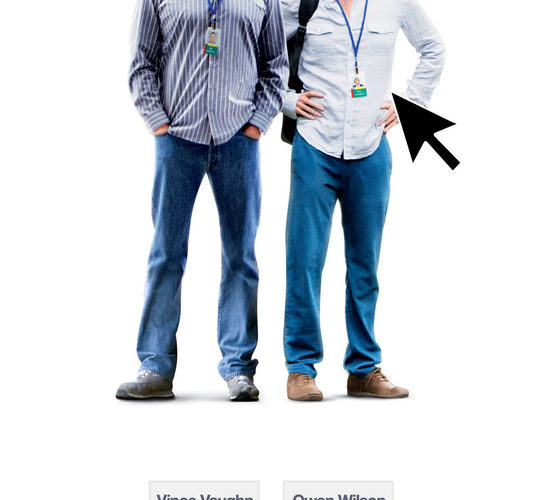 The Internship spends most of its time being a feature-length commercial for Google, saving a little to advertise for the fading stars of Vince Vaughn and Owen Wilson. Not surprisingly, this doesn’t leave much for room for laughs, which is a problem when the film in question is poised as a big summer comedy. Wilson and Vaughn are trying to recreate their Wedding Crashers comaraderie, but all this meager adult wish-filfullment manages to crash are our expectations for a good time at the movies.

Remember the days when the likes of John Candy and Bill Murray waltzed across screen running resorts, busting ghosts, or hapazardly infilitrating the Army? The best their modern counterparts can muster is a cloying internship at ‘Google,’ suggesting that our cumulative social dreams have been severely downsized by the years of recession. When wristwatch salesman Billy (Vaughn) and Nick (Wilson) learn from a client that their company is being shuttered (in an awkward, implausible scene), Billy sets up a video-conference to nab the pair a Google internship. Now, competing in what they glibly refer to as a “mental Hunger Games” against bright, fresh faces, Billy and Nick take up that well-worn mantle of the out-of-touch ‘old guys’ who stumble and fumble before showing up the whelps with their  hard-won life experience.  For their part, the two stars try their hand at sparking the mercurial playfulness of their previous outing, but no number of pointed jabs at their age and cluelessness can cover the fact that much of this manic energy doesn’t wear so well a decade later.

Wilson immediately flips on the bemused affability that he knicked from his Wes Anderson personas, making way for Vaughn’s least effective, most annoying tactic; talking louder and more frantic until a scene becomes funny. One of Billy’s co-workers appropriately calls out this behavior with “You’re saying a lot of words really fast that don’t mean anything,” but instead of heeding the warning, Vaughn takes it as a clearance to use it without discretion. Director Shawn Levy, who made the likable Date Night and pulpy Real Steal, does what he can to prop up these two with a prickly supporting cast that can spur the boys to comic inspiration. Some of this works, like the welcome rapport between Rose Byrne and Wilson, who get some mileage out of the stale ‘forbidden’ office romance foisted on them by the script. Byrne and Wilson settle down into the quieter spaces of The Internship at the same that Vaughn and co-star Josh Gad instill some peppy snark into the genial atmosphere. Although he’s an unfortunate casualty of the suffocating Google worship, Aasif Mandvi hits all the right notes as the acerbic, demanding head of the internship; he slyly chides the leads into most of their best moments.

Despite the presence of Night at the Museum on his resume, Levy is a better director than this; the instincts he displayed in shepherding Date Night’s generic premise towards the zippy, whimsical funhouse it became are largely absent here. The Internship piles on the gimmicks and stale jokes, trotting out mentions of Flashdance and the X-Men that might have seemed clever and hip were Vaughn mouthing them in 1997’s Swingers, but feel like desperate, cynical artifacts in 2013.  I suppose that the director and his actors deserve some credit for ensuring that the whole of The Internship doesn’t feel particularly cynical or desperate; it’s not particularly good, but that its fealty to the throne of Google doesn’t gag the audience outright is rather impressive. This is, of course, a bittersweet accomplishment that probably shouldn’t have been attempted in the first place. When we are at a loss to describe this sort of flabby, un-focused paen to the marginalized and middle-class, the common term thrown about is ‘feel good.’ If the makers of The Internship think they have achieved that quality with their film, I suggest they run it through a Google search, and meditate on the results.

The Internship opens in wide release on Friday, June 7th.