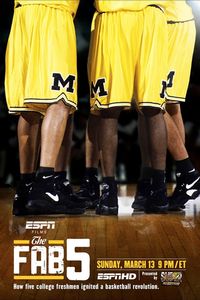 For those film fans who are currently wrapped up in March Madness, this writer heavily recommends you tune into ESPN at 9pm ET, for the premiere of ESPN Films’ The Fab Five.

By the producers of ESPN’s 30 for 30 documentary series, this two hour film tells the captivating story of one of the most famous/infamous teams in college basketball history. It all began in the fall of 1991, when five freshmen- Juwan Howard, Jimmy King, Ray Jackson, Jalen Rose and Chris Webber– set foot on the campus of the University of Michigan, representing the greatest class ever recruited. For all freshmen college recruits, these five freshmen were among the top 100. Four of them, among the top 10.

The group, who eventually became known as the “Fab Five”, would make history not only for being the first all-freshman starting line-up, but also charged a cultural revolution that would forever change college basketball. In a time when college basketball involved tight-fitting shorts and a clean-cut image, the Fab Five sported baggy shorts and black socks. They talked trash on the court and blasted hip-hop in the locker room. Today, this may sound typical of what we’d expect from college players, but two decades ago it was revolutionary.

Like many cultural revolutions, theirs was embraced by many, and shunned by many more. Their controversial antics on the court earned much attention from the media and the world, often being depicted as thugs. In a poignant moment of the film, the players describe what it was like to receive thousands of letters of hate from University of Michigan alumni.

The documentary, while covering many of the team’s glory moments, doesn’t shy away from tackling the more scandalous moments surrounding the players, including a payment scandal and the removal of the team’s banners from Crisler Arena in the wake of it.

The film features an impressive line-up of commentators, including coaches, teammates, sports reporters (including Detroit Free Press columnist Mitch Albom), rappers Ice Cube and Chuck D, and members of the Fab Five. However, the one very noticeable absence of from the film is Chris Webber, who decline to participate in its making.

The Film Stage recently caught up with Jalen Rose, who serves as a producer on the film, to ask about the impact of this absence, and whether it caused any hesitation with the project. Rose replied that as the story takes place from 1991 to 1993, Webber not being involved does not affect the integrity of the story at all, and there was no hesitation with moving forward. He also added that while Webber decided not to be involved, they are in fact still close friends who speak often.

While this film is longer than the usual format known by the 30 for 30 team, this film still provides the captivating punch the series is known for. Since it became involved with the Tribeca Film Festival a few years ago with the introduction of the Tribeca/ESPN Film Festival, ESPN Films have been putting out exceptional films that can be appreciated by the sport fan and cinephile alike, and this film is no different.

If you don’t have big plans tonight, tune in.