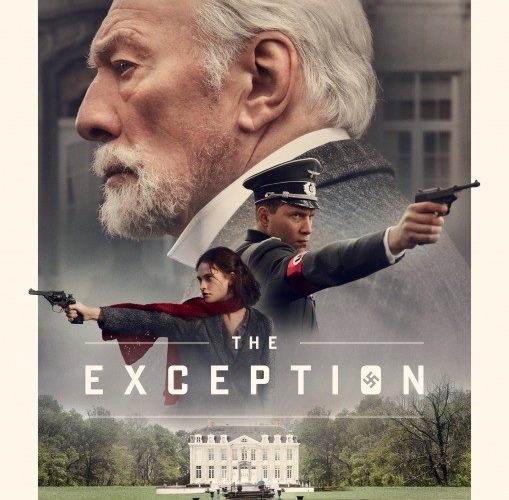 Review: ‘The Exception’ Offers a Predictable Journey in Nazi Germany

By all accounts Kaiser Wilhelm II was hardly a great leader. He put Germany onto its fateful course towards World War I and shortly after defeat was forced to abdicate the throne into exile at the secluded Netherlands mansion Huis Doorn. Alan Judd would eventually write an historical fiction novel entitled The Kaiser’s Last Kiss about the former crown holder and an incident involving the Nazis, Gestapo, and Hitler’s right-hand Heinrich Himmler—with the potential for redemption. Christopher Plummer would read said book, let his manager know of his interest, and wait ten years before another’s option lapsed so it could fall into their hands. Simon Burke would crack the screenplay, theater director David Leveaux would be hired to helm his debut, and The Exception would be born.

Plummer takes on the role of Wilhelm, now an aged master of the mansion living on the allowance of the Reich’s pity. It’s just himself, his wife Hermine Reuss of Greiz (Janet McTeer), and the loyal Colonel Sigurd von Ilsemann (Ben Daniels)—who goes over daily briefings about Hitler’s rule. Thinking he was forgotten or perhaps left to his own devices without hope of an auspicious return, Wilhelm’s mindset changes once the Nazis invade Holland. Suddenly he is back on the motherland’s radar, his safety from potential Dutch operatives a moderate imperative. So Hitler sends someone to protect him: an almost disgraced soldier in Captain Stefan Brandt (Jai Courtney). Since the Kaiser’s death will mean his own, he dutifully assists the secret police’s search for a British agent. It sounds ripe for thrilling suspense. Who is the spy? Will Brandt and Gestapo agent Dietrich (Mark Dexter) discover his/her identity? Is it possible that Hitler would send for the Kaiser to shore up support from the monarchy sympathizers in his midst? This is how the film is billed—a rousingly heart-pounding drama of political espionage to counter a “surprising” forbidden love story. We’re to follow the complex Brandt as nightmares of Nazi slaughters haunt him despite being asked to facilitate more. We’re to wonder about Wilhelm, his allegiances, and the lengths he’ll go to reinstate his position. But neither is very withholding of his true motivations. Both are in opposition of Hitler’s methods and both are probably at greater risk of Germans killing them than anyone else.

Since we can now scratch most hope for suspense from the list, what about romance? Well, I put “surprising” in quotes above because we can’t necessarily rely on it either. While the love story is the film’s central component, it’s hardly shocking. Just because there are rules against copulation with mansion (and by extension “kingdom”) staff doesn’t mean it’s surprising when someone does so anyway. But even more than that, the first time Brandt and Wilhelm’s newest maid Mieke (Lily James) are alone holds no attempt at modesty. He flatly requests her to “please” remove her clothing and she readily complies. You could say there’s “surprise” when she reveals she’s Jewish, but that’s far enough along in their tryst to know he’s hardly an Anti-Semite (despite the uniform).

No, The Exception is merely a serviceable drama taking us on a competent if predictable journey. We peg everyone’s motivations early on, but our not having any trouble guessing where their paths will take them doesn’t mean we can’t still be entertained. You just need to temper your enthusiasm and accept it for what it is without the twists or turns descriptions feed us. You’ll still have to overcome the fact that finding the former Prussian monarch and a Nazi captain—who both don’t do anything to help stop the war—endearing and sympathetic is key to enjoying the whole, though. And in all honesty that will be a tough pill to swallow for some. Love is a worthy cause, but genocide kind of tips the scales. The script hopes we can come together with the notion that killing children is indefensible, but it doesn’t erase the memory of so many others being slaughtered. If not for the little girl Brandt saw gasping for air at his former post, would he have nightmares? We don’t know because she’s the image he cannot ignore. If not for being engaged in war at his rule’s end, would Wilhelm have eventually “dealt” with the Jewish problem he’s quick to superficially agree with upon mention by Himmler (a laconically deliberate Eddie Marsan)? These are bad people. There’s no removing the historical implications of what they and their nation did at this time. Putting a woman in the middle to open their eyes to the suffering doesn’t change that.

The film is therefore intrinsically tainted by its setting. Pair this with its inability to truly captivate beyond its surface and the whole finds itself on poor footing to succeed. (I hardly find it an unimportant detail that A24 relegated The Exception to its DirecTV deal with exclusive streaming rights before a limited theatrical window.) It’s neither boring nor manipulative, so hating it is impossible. But there’s also little being offered on the other end of the spectrum to love it. The performances are good across the board and do enough to earn our investment, but only James’ Mieke is left unblemished. Courtney provides Brandt with a human struggle between soul and country, but his choices always toe the line between both rather than standing strong for one.

Similarly, Wilhelm and Hermine are always playing the angles. While they won’t utter the words “Heil, Hitler” when coaxed, it’s difficult to tell whether this refusal is an attack on Adolf’s evil methods or a protest against his place upon their throne. They’re willing to play nice as long as they are rewarded and as such we cannot call them worthy of our empathy. I think McTeer is wonderful in the role, her strength of character mixed with a selfish drive for authority allows for some subtle laughs when caught “managing” situations. And Plummer is a delight as the Kaiser, his mercurial temper quick to verbally throw the Reich to the wolves in colorful rhetoric and his sweetness able to conjure compassion for those of whom he values. But it’s all for show. This insane situation of kings, spies, and murderers engaged in duplicitous actions during World War II is window dressing for small-scale romance. Unfortunately the former is always more interesting than the latter, its existence as background dressing a constant disappointment. We want to be uncertain about Wilhelm keeping his life by the end but the film becomes more about whether Mieke and Brandt will keep their posts if discovered el flagrante. There’s enough here to stick with it to the end, but I cannot say it ever did anything to leave a lasting impact. I was glad to bask in the light of another great Plummer performance, but the film’s tabloid-fodder of a nude James and Courtney will probably be its legacy.