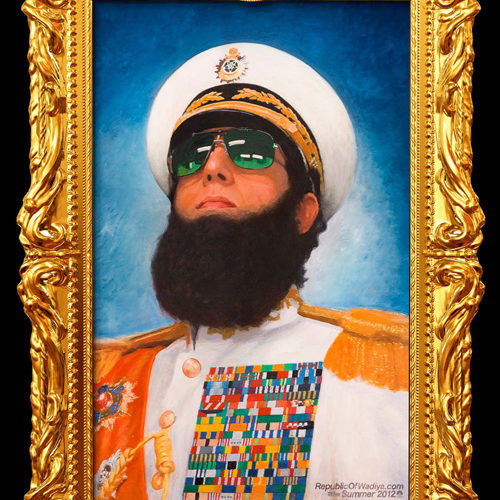 The Dictator certainly sounds like a great idea. Gifted character actor Sacha Baron Cohen inhabits the grandiose, pompous, and ridiculous mantle of a third-world dictator in the same kind of self-parody that was the hallmark of his stable of characters from Da Ali G Show. Buttressed by previous collaborators, writers Alec Berg, Jeff Schaffer, David Madel, and director Larry Charles of 2006’s Borat: Cultural Learnings of America for Make Benefit Glorious Nation of Kazakhstan and the 2009 follow-up Brüno (not to mention talent associated with Saturday Night Live, Seinfeld, and Curb Your Enthusiasm), the film looked great on paper. Unfortunately, that paper is a script. What made films like the cultural smash Borat so popular was the live-wire nature of the proceedings. It was risky and dangerous and, most of all, new, allowing the brilliant Cohen to show off his impressive mix of Peter Seller‘s range, Andy Kaufman‘s commitment, and the parodic wit nature of a Daily Show field interview. You couldn’t believe the hateful bile coming out of sweet Borat’s mouth not just because he was voicing such horrible things through such a wild smile, but who he was saying them to. The scripted scenarios in Borat played out against a real tapestry, allowing for a whole different level of intelligence and comedy to be played. Cohen took Shakespeare’s fool and let him loose on the real world. It was as brilliant as it was fleeting.

The Dictator is not Borat, nor could it ever be. The anonymity that is inherent to Cohen and Co.’s previous work is all but vanished. But no one told them to not try anyway. Unfortunately, they take the character that hilariously skewered the self-serious, image conscious Ryan Seacrest at this year’s Oscars and plops him down in to a universe that bends to his every whim, allowing for all of his incredibly offensive comments to run unchecked. It’s like taking a Ferrari and restricting it to residential suburban streets: without the danger, you just plod along. That’s not to say that there are not funny moments throughout the film. The premise is strong enough to bolster a hilarious opening that introduces us to Cohen’s General Aladeen, leader of The “Republic” of Wadiya. The good general is a mixture of Kim Jong-Il (of whom the film is dedicated), Mahmoud Ahmadinejad, and Saddam Hussein (whose novel Zabibah and The King is the loose basis of the film), who runs his poor country like his own limitless amusement park. While bits like the running in his own Olympics have been shown ad nauseum in recurring television commercials and generally wear out their welcome by release, there is a genius concept where he has replaced so many words in the language with “Aladeen” that some meangings contradict themselves.

Aladeen wants a nuclear weapon (he can barely get through a speech about how his facilities are used for energy without cracking up), but his adviser, Tamir (Ben Kingsley wearing a slightly silly outfit) would rather suck up to the west and rake in cash by selling the country’s nationalized oil fields. When Aladeen is called to the UN for a hearing, Tamir has him kidnapped, with an eye to be tortured and killed. He is replaced by Aladeen’s stand-in, a dimwitted sheep herder, also played by Cohen, who is tasked with signing a new democratic constitution without presumably eating it first. Aladeen escapes from his captor (John C. Reilly in an all too brief cameo) but not without his beard. Set adrift amongst an anti-Aladeen protest, he’s saved by Zoey, Human Plot Device (the criminally underused Anna Faris, who can’t ever get a job worthy of her talents). She is the epitome of the Brooklyn Agro hippie hipster stereotype, and boy do Cohen and company ring out every possible joke about her. Outside of being a smiling punching bag (at one point she says, “oh I get it!” so the audience can stop wondering if any synapses actually fire) she also conveniently owns and operates an organic store that will cater the fateful UN meeting with Fake Aladeen.

This film, like the others in the unofficial series, is fairly light on plot. It is a strung together series of small skits, all sort of contingent on the previous ones, that sort of moves forward towards an inevitable conclusion. And if the concepts were funny, original, and fresh, this lack of a hard through line would be lost under the weight of the laughs. Do you remember what Brüno is about? Okay, now do you remember the talking urethra? There are some great ideas in this movie that are either drawn out too long, like horses so beaten to death that even their opaque rising souls are taking some of the brunt. Take the helicopter scene, for instance, the one that’s so funny in the constantly repeating commercials. It works perfectly in a truncated form, getting right to the joke you know they’re obviously driving at. In the film, it’s about four times as long. The strings of the screenwriters are too visible, making the audience wait and wait for them to just get on with it already.

It’s also one of the rare times that they skewer America. The team is far too busy going after such large cultural and social bugaboos as Applebees and Crocs (which I’m pretty sure were dealt with before Borat even came out). There is a fairly genius bit towards the end of the film that illustrates that the United States is run very similar to that of a third world dictatorship, but that kind of high-minded comedy clarity is rare. Instead, you’ll hear jokes about Ferris’ arm pit hair. I guess it’ll be fresh to teenagers who weren’t alive for Paula Cole‘s run in the mid-90s.

Luckily for Cohen, he is a fantastic actor, as recent turns in Sweeney Todd: The Demon Barber of Fleet Street and Hugo have shown. But his days of running this kind of gimmick are sadly long gone.

The Dictator is now in wide release.