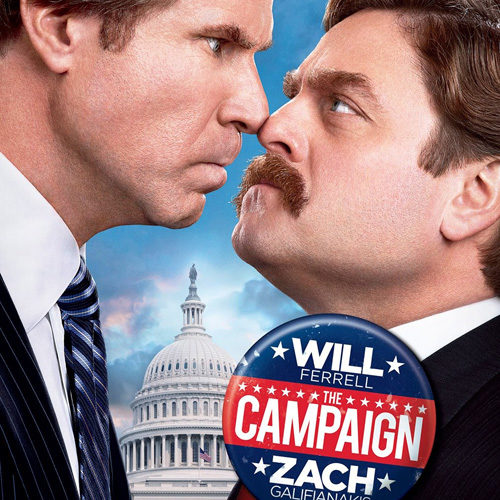 It appears director Jay Roach learned a lot from 2010’s Dinner for Schmucks. Although not a film without its moments, it never came together, thanks to a series of typical weak comedy mistakes. From the tonal missteps to the structure (the dinner doesn’t happen until 90 minutes in), it was all over the place. Roach’s big screen follow-up, The Campaign, also pits together two of today’s most likable screen presences: Will Ferrell and Zach Galifianakis. This time around, with quick-witted material, Roach makes the best out of the two comedic weapons he’s got.

For years Cam Brady (Will Ferrell) has dominated the North Carolina congressional elections. He always wins by a landslide, thanks to never having an opponent. With reelection coming up, Cam finally finds himself an opponent capable of matching his idiocy: a pug-loving, small town boy named Marty Huggins (Zach Galifianakis). Huggins, unlike Brady, loves his state and wants to do good by his community. Of course, he soon comes to learn that wearing your heart on your sleeve and playing fair isn’t a way to win an election, and once that realization hits him, The Campaign turns into a darkly comical battle of man child acts between Higgins and Brady. What could have been a series of sketches actually has a smooth narrative drive. Roach wisely keeps the film at 85 minutes, never allowing for many dry spots. If a joke doesn’t work — which isn’t too often — Roach, Ferrell, Galifianakis and screenwriters Chris Henchy and Shawn Harwell immediately bounce back with an over-the-top fight or wonderful sight gag, such as Huggins having pugs on his checks.

What most differentiates The Campaign from Dinner for Schmucks is the firm handle of tone. Roach’s previous comedy was at a constant tonal struggle with itself, always unsure if it wants to go mean-spirited or sweet. Because of that, it felt like two movies awkwardly slammed together. With The Campaign, there’s an actual cohesive voice. There is a cruelty to the film, most of the R-rated movie involving Cam and Marty going at each other’s throats. There’s baby punching, affairs and many other lovable acts of crudeness, with Roach always going for broad but never “easy” gags. Both characters should be repulsive due to their acts, but Roach, Ferrell and Galifianakis find empathy in these idealists turned power-driven politicians. They are well-intentioned people gone bad, all at the hands of big business.

By the end, their turn towards good is earned. The ending is a fantasy of sorts, Roach’s dream that one day the more corruptible politicians will come clean about the shady moneymen they allow to back them. The reason why such an obvious commentary never drags down The Campaign is because it always remains the subtext of a goofy joke, rather than a message trying to disguise itself as a joke. Because of that concise balance, Roach has made his sharpest comedy in years.

The Campaign is now in wide release.