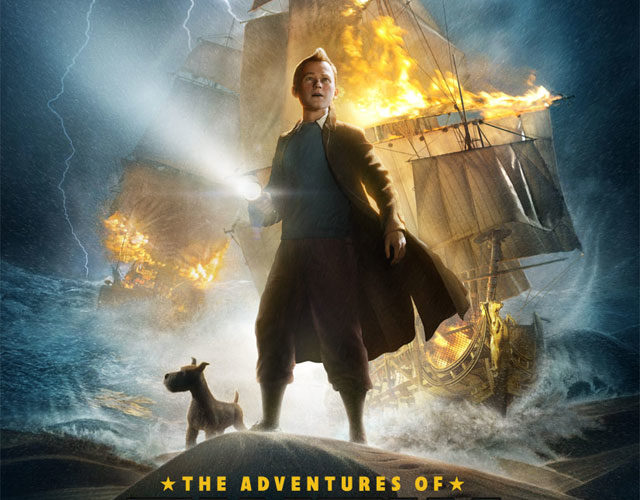 [Review] The Adventures of Tintin The behind-the-scenes premise for The Adventures of Tintin is, to put it mildly, very exciting. Two of the biggest names in Hollywood, Steven Spielberg and Peter Jackson, teaming up to create a big-screen adaptation of the beloved comic book series by Hergé. And with a screenplay by Edgar Wright (Shaun of the Dead, Hot Fuzz, Scott Pilgrim), Joe Cornish (Attack the Block), and Steven Moffat (Sherlock, Doctor Who), it’s hard to imagine what could possibly could go wrong.

Unfortunately, this lavish, $130 million production lacks the grandeur of The Lord of the Rings, the bubbly humor of Shaun of the Dead, and fails to recreate the roguish charm of Raiders of the Lost Ark.

The story centers on the titular boy journalist Tintin (voiced by Jamie Bell) and his faithful canine sidekick Snowy as they’re drawn into a conspiracy involving a ship and its captain, Archibald Haddock (Andy Serkis), who has been captured by evil villain Ivanovich Sakharine (Daniel Craig) with the intent of finding the unimaginable treasures that three mysterious scrolls hold the secret to. Along the way, Tintin meets a few eccentric characters, such as the amiable idiots Thomson and Thompson (Simon Pegg and Nick Frost). They provide the humor in the film which, given the light-hearted nature of the story, there perhaps could have been more of. It’s a testament to the actors’ diversity that it’s genuinely hard to distinguish who voices who. The characters have been created authentically and the performers encompass their roles, with the strong dialogue following the structure of the original series faithfully.

After the delightful opening title sequence (reminiscent of Spielberg’s own Catch Me If You Can), the plot becomes rather meandering and even tedious at some points, which is certainly not what you want in a lively action adventure film. The big problem is the setup — it promises a much more eventful and enjoyable adventure than what we are actually given. The finale is an anti-climax, too, failing to deliver on both the suspense and sequel-establishing front.

There are moments of glory, such as one stunning, more than five-minute scene in which Tintin and Snowy have to chase an eagle all around a small African town in order to regain the all-important scrolls. This set piece is wonderfully shot by Spielberg, involving many sudden and deft turns of the camera. However, other action sequences are disappointingly lackluster; the unevenly paced plot does not help matters.

The 3D has little imagination and, like most of the recent films using what can only be described as a gimmick, barely makes any noticeable differences with the action. (Aside from making the screen darker.) There are occasions when the 3D is prominent — such as dust flying out from the screen — but these take up a miniscule portion of the runtime. There are undoubtedly positives to this flawed adventure, and perhaps the most prominent of these is the loving detail with which the landscapes have been created. With the lit-up rainy streets in the city, the harsh waters of the sea, and the torrid deserts, the visual backdrops are an extremely impressive spectacle. It’s a shame, then, that the character models are rather bland and plastic, which makes it hard for them to convey much emotion. A beautiful atmosphere created by the filmmakers just doesn’t make up for stale human designs.

Steven Spielberg’s first foray into the world of motion-capture animation is an ultimately disappointing one which builds up to a huge anti-climax. It would be premature to say he has lost his touch, but it is certain that he needs to rediscover the inspiration that once lit up his films. That said, Tintin’s charm will appeal to younger viewers, and the film should make for a box office success while providing nostalgia for fans of the comics.

The Adventures of Tintin is currently in wide release in the UK and will hit US theaters on December 21st.