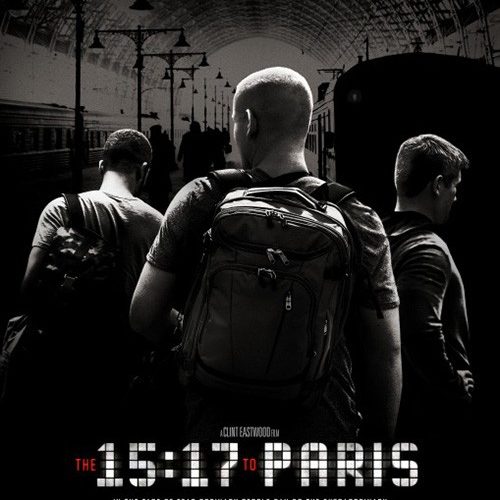 Review: ‘The 15:17 to Paris’ Brings Authenticity, Dullness to Clint Eastwood’s Portrayals of Heroism

Social media discourse around The 15:17 to Paris has already positioned it as the first big cinematic culture war flashpoint of the year. But while liberal thinkpiecers and conservative fans alike will be able to find plenty of moments to thump their chests over, it doesn’t really feel as though director Clint Eastwood is aiming for any big statements about America or terrorism or what have you. That doesn’t mean any of them will necessarily be wrong for reading jingoism or affirmations of traditional values in the subtext or text. It’s just that, for example, characters are seen praying not as a dog whistle for Christian audiences but simply because that’s what their real-life selves would do. (And sure, it can be both, but it comes more matter of fact than pointed.)

Of course, in this film, the distinction between real-life self and movie self is ambiguous, or nonexistent. Spencer Stone, Alek Skarlatos, and Anthony Sadler, three young Americans who helped foil a would-be mass shooting on a train in France in 2015, all play themselves in this recreation of the event and their lives leading up to it. This modern-day Audie Murphy move on Eastwood’s part has earned a lot of press attention. Less publicized is that he’s not only doing it with the main trio. American-French citizen Mark Moogalian, who also helped stop the shooter and was wounded doing so, also plays himself, as does his wife Isabelle.

This means that in the train scenes, there are moments in which every person we see on screen is acting out exactly what they were in fact doing on the real train several years ago. The attention to detail is such that they are even wearing the same clothes they did on that day, and Stone has said in interviews that he experienced a flashback during filming. This 20-minute or so sequence at the film’s climax is its clear highlight, both for Eastwood’s expertly tense command of coolly controlled freneticism and for the fascinating metatextual elements. His past few films have picked at cultural perceptions of heroism, and here we have the actual individuals lauded as heroes demonstrating the paradoxically mundane and terrifying reality of their acts.

The movie further underlines its protagonists’ ordinariness by spending the preceding hour or so biographizing them with a focus on how thoroughly non-dramatic their lives were up until this crucial point. Not a bad idea, but it’s unfortunately undermined by poor dialogue and acting, as well as a general aimlessness that caused my interest to drift away bit by bit. Outside the train sequence, the nonprofessionals work reasonably well with any material that lets them shoot the shit (they are, after all, lifelong friends for real), but everyone else flounders in thankless roles, especially Jenna Fischer and Judy “Thankless Roles Are My Type” Greer as two of the guys’ moms.

The movie also contradicts itself in its “ordinary heroes” conceit, mixing the mundanity with an insistence on destiny, that these dudes’ entire lives were preparing them for this one moment. Scenes of Stone and Skarlatos’ military training are highlighted by brief flash-forwards to the train attack (the editing here is much less graceful than the cutting between timelines in Sully). This feels less like an honest examination of true heroism and more Christian inspirational literature. The 15:17 to Paris is a long stretch of boredom culminating in one jolt of interest.