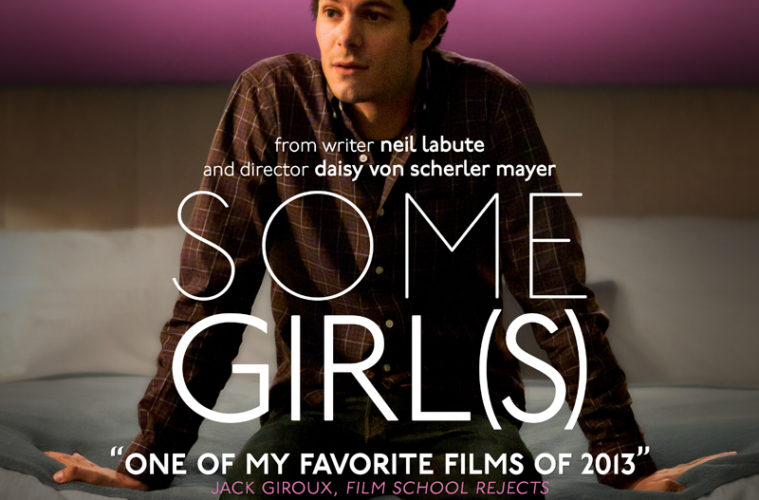 Often labeled a misogynist misanthrope, Neil LaBute has made a career of writing self-absorbed characters completely ruining the lives of those around them for the fleeting second of giddy happiness resulting from knowing they’re in absolute control. Whether its two men actively seeking to destroy a handicapped coworker or a woman obsessed with proving she has the ability to manufacture the perfect man, his plays shed light on the shadowy corners of human nature in a heightened, darkly comic way. This acerbic wit and fearless desire to distort our worst features into our most prevalent ones are why he’s an auteur of note, details blatantly absent from his last three Hollywood gun-for-hire projects. And while 2013 marks his return to directing original work—Some Velvet Morning—it also gives a new cinematic adaptation in Some Girl(s). A LaBute play hasn’t been brought to the big screen since 2003 saw The Shape of Things make the transition two years after its London debut. While remaining consistently prolific in the theater since—even garnering a Tony nod for reasons to be pretty in 2008—his work on the less than effective Lakeview Terrace and lackluster remakes The Wicker Man and Death at a Funeral seems to have prevented levels of equal creativity at the movies. Whether due to financial woes or waning interest in his abilities, it appeared as though the LaBute film career I had hoped to follow was officially over. Thankfully, in what I’d like to think is a sign of things to come, someone saw fit to breathe new life into his 2005 look at a man’s guilty conscience.

Directed by Daisy von Scherler Mayer with an all-new cast from those that originated the story in New York City and London, LaBute’s new iteration of Some Girl(s) sees Adam Brody flying the lead role cross-country to reconnect and make amends with old flames before getting married. It’s the type of premise perfectly suited to an actor known for his ability to loquaciously enter into situations better left alone. There is this charming innocence about him that pairs with a disarming smile to make what’s obviously a selfish exercise to elicit forgiveness seem endearingly like a sensitive guy honestly caring about those he wronged. We believe a weight is crushing his soul and honestly hope he and the scorned can find release so all are able to move forward. Set in the hotel rooms where Brody’s character asks his ex-girlfriends to meet him, the adventure escalates with every exchange uncovering exactly how horrible a person he is. High school sweetheart Sam (Jennifer Morrison) in Seattle shifts along to Chicago fling Tyler (Mía Maestro) before former Boston university co-worker Lindsay (Emily Watson), his childhood best friend’s sister Reggie (Zoe Kazan)—newly written for the film—and finally Bobbi (Kristen Bell)—the one who got away in Los Angeles—follow. It’s an enterprise that starts with dragging up old memories the girls had let dissipate until his out-of-the-blue reunion loosens the mental debris, an inevitability he more or less expected. And for wholesome Morrison and sultry Maestro it provides the kind of closure to officially let them forget before saying a final goodbye.

But they’re the “easy” ones with Sam currently married and living the life she wanted and Tyler never having a desire to settle down anyway. They resented him for his soon to be discovered penchant for running away, but weren’t indelibly scarred as much as he may have thought or hoped they were. No, that unforgivable feeling of abandonment and betrayal forever lingering to mar each subsequent relationship at their most vulnerable was saved for the others. Whether an adulterous affair with a woman ten years his senior, what he remembers as a stolen kiss at sixteen with an eleven-year old child, or the girl who thought she found the man she’d marry, these are the victims who haven’t and never will forget. No matter how effective Brody proves in his embarrassed regret, he is rendered a prop for Watson, Kazan, and Bell to bear their souls. The weighted question posited, “When is hurting okay?” sums the film up perfectly with its one correct answer that we all pretend to overlook. I’m sure all three women hurt someone in their lives too, but none in as vile a manner and with as little regard for the victim’s wellbeing as their common predator. He’d love to believe his actions could be swept under the rug with empty words and a grin—he may even believe they have when all’s said and done. But whether he allowed himself to notice or not, even Sam and Tyler’s “forgiveness” was undercut by the freedom to let him go.

Watson, Kazan, and Bell don’t have that luxury as the very fabric of their beings have been altered while a recent fictionalized account he wrote to critical acclaim betrayed them yet again. Turning the tables to attempt making him feel a fraction of the pain they felt, each shares their truth devoid of the perception he’d like to believe. And while such a revelatory insight into why his conscience made him confront his demons would be enough to know Neil LaBute was at the center, the screenwriter takes it further until we’re left wondering whether Brody’s gentle yet scared lover has been devilishly in control of his actions all along. A user and abuser through and through, his fiancé caught on a supposedly cathartic sojourn may be LaBute’s most terrifying creature yet.