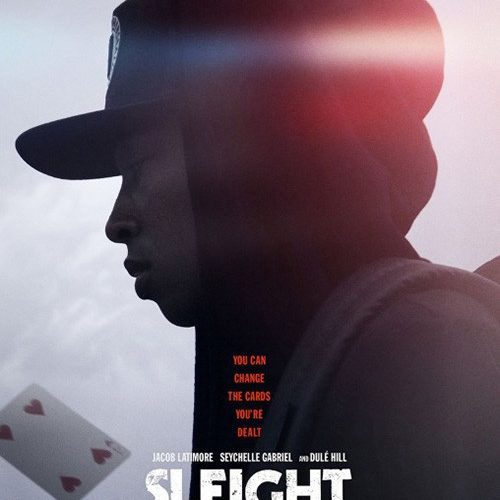 Review: ‘Sleight’ is a Lesson in How to Create a Refreshing Origin Story

After his mother dies, teenaged Bo (Jacob Latimore) is left to look after his little sister Tina (Storm Reid), which not only thrusts him into sudden adulthood, but also forces him to give up a scholarship and become a salesman for notorious drug dealer Angelo (Dulé Hill). But Bo is a caretaker in more than one way: besides devoting himself to his younger sibling, he also seems keen in bringing joy to the world through his performance. Bo happens to be a street magician whose impressive card tricks and gravity-defying coin illusions bring a smile to the people he meets. Destiny might have dealt him the wrong cards, but he’s fierce in his determination to maintain a sense of wonder.

Through focused, economic storytelling director J.D. Dillard turns Sleight into the rare kind of film that feels both familiar and unique. For all we know, Bo appears to be yet another version of the orphaned wunderkind comic books have been devoted to since they began, but unlike Bruce Wayne or Clark Kent, Bo has to deal with racial and social issues that make him feel more real. Perhaps the closest he would come to in terms of comic book parallels would be that he’s the polar opposite of Tony Stark. Like the famous billionaire-turned-Iron Man, Bo has a desire to know how the world works from a mechanical perspective, and he often experiments with himself in lieu of more sophisticated subjects or equipment.

As the story progresses there are shades of iconic superhero films and themes, including an unsuspecting love interest named Holly (charmingly played by Seychelle Gabriel) and a friendly next door neighbor (Sasheer Zamata). As Angelo goes from mentor to villain, we are presented with a refreshing origin story anchored by Latimore’s magnetic personality. Dillard ably balances the film’s need to thrill (there is a vault robbery sequence that would have made Hitchcock proud) with moments so intimate you feel almost like a voyeur (also something that would’ve made Hitch proud), such as a scene in which we learn there might be a reason why Bo’s love interest wants to spend so much time with him and away from home.

If Sleight wasn’t so entertaining, one might be tempted to define it as a social drama in which we are witnesses to the lack of opportunities young black men are provided. Dillard is too smart to let film become just a condemnation of social injustice, but it’s impossible to watch the film and not wonder what bigger superhero movies could be doing with diverse casts, smaller budgets, and more creative thinking. What’s evident in Sleight is just how much white role models come to shape people of color. Bo has a vintage poster in his room which reads “nothing on Earth can hold Houdini a prisoner,” and Dillard’s camera focuses on this poster several times during the film. By the end of Sleight one can certainly draw some hope from the idea that maybe somewhere an underprivileged kid might be watching and what he’ll hang on his room for inspiration will be a poster of Bo. Now that’s magic.

Sleight is now in theaters.