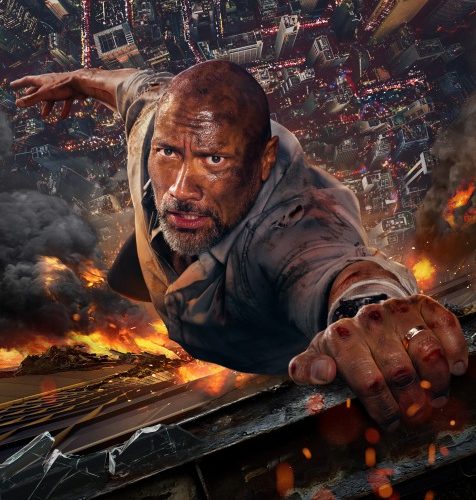 Review: ‘Skyscraper’ is a Self-Aware Homage to Genre Classics

In an age of remakes, reboots, and rehashes, it’s suddenly become refreshing to see homage — especially the self-aware kind. If you’ve seen the alternate posters for Rawson Marshall Thurber’s Skyscraper that crib off the designs of Die Hard and The Towering Inferno, you understand how the filmmakers have embraced comparison due to their love for those genre classics. It’s this love that allows them to take a step back and create their own story in those images, at once honoring the past, updating for the present, and creating something wholly new. Nobody going to see the comedic-minded Thurber’s foray into straight dramatic thrills is doing so with the intent to be blown away by anything more than the special effects, crazy stunts, and tailor-made sets for mayhem.

And he delivers all three from start to finish with Will Sawyer (Dwayne Johnson) at center. A retired FBI Hostage Rescue command leader who lost his leg in a standoff gone wrong, Will currently runs a safety consultant company that his old buddy Ben (Pablo Schreiber) got hired by his über rich boss (Chin Han’s developer Zhao Long Ji). The job is simple: be the independent third set of eyes to green-light an insurance policy for the biggest super-structure ever built. At three times the height of the Empire State Building, Zhao’s baby has retail centers, indoor parks, residential space, and a state-of-the-art hollow sphere lined completely with high-definition screens able to make it feel as though you’re floating above Hong Kong and able to touch Heaven.

As the trailers show, however, that simple job quickly proves the opposite. With a mole in Zhao’s team (Thurber isn’t interested in wasting time revealing which of Ben, Noah Taylor’s Mr. Pierce, or Adrian Holmes’ Ajani Okeke the culprit is) setting a plan into motion meant to leave Will the patsy within villainous mastermind Kores Botha’s (Roland Møller) game, this power shift hits a few snags of its own. Best-laid plans often go awry no matter which side between good and evil you adhere and underestimating any character Johnson has ever played is the perfect wrench to throw. With his family (Neve Campbell’s Sarah, McKenna Roberts’ Georgia, and Noah Cottrell’s Henry) trapped above the violent fire let loose upon the 96th-floor, nothing will stop him saving the day.

By nothing I mean Hannah Quinlivan’s ruthless Xia, Inspector Wu’s (Byron Mann) fully deployed police force, a burning building with no entrance except through a window half a mile in the air, automatic gunfire, and gravity itself thanks to a myriad vertigo-inducing instances wherein ground is in short supply. We watch as Botha’s reason for this terrorist attack is revealed, why Zhao is positioned as his target, and how the Sawyer clan will inevitably be caught in the crossfire as hostages to turn Will’s desperation gauge beyond eleven. The trajectory is more or less familiar with this fare’s usual inclusion of trite plot mirroring that simultaneously earns a smirk and groan in equal measure thanks to blatant visual cues, but the ride is wild enough to stay onboard. Thurber injects humor where he can courtesy of duct tape, but “dad joke” chuckles are nothing compared to his Dodgeball or Central Intelligence. This is less a slight than a warning for anyone going into Skyscraper because of his name alone since there’s no genre-bending here. It’s just one man against well-armed invaders of a giant building on fire with a funhouse of mirrors on the top floor able to conjure Enter the Dragon (or Conan the Destroyer) flashbacks. I’m not going to lie: I would have liked more quips. Johnson is inherently funny and Thurber successfully wielded that fact to their previous collaboration’s advantage. With an opening scene as intense as its unapologetically bleak domestic hostage situation, however, that obviously won’t be in the cards.

It’s too bad since the script is pretty lazy. Leaning into the cheesiness this truth provides would have done wonders for entertainment value. It would also cut into the suspense, though, and Thurber is genuinely interested in making hearts beat faster rather than bellies burst. He’s highlighting Johnson’s physicality as more than a sight gag opposite Kevin Hart since his Will is quite literally fighting the laws of nature with only a prosthetic leg as a Swiss army knife of utility. Sawyer gets to fight his fair share of human adversaries too, but the obscenely expensive high-rise into the clouds built by hubris is what really needs to be defeated. And it’s often by fingers swiping tablet screens, not merely biceps flexing their brute force. Another interesting aside is how the film uses current technology to move the story along. Without walkie-talkies or our contemporary equivalent (cellphones) for long stretches, the characters must discover what’s happening from the live news coverage captured by media lenses and gawkers alike. The police can’t find Will after he eludes capture? Turn on a local TV feed to see what some random person is streaming via social media. A quiet moment of expository debriefing in-between action set pieces bogging down the pacing? Cue the “Ooos” and “Ahhs” of the crowd outside to ensure eyes hit the nearest monitor with Will attempting yet another suicidal stunt to save his children. He holds their lives as higher than his own because he knows first-hand about monsters that don’t.

No matter how hokey or neatly cyclical things get, Johnson excels. The supporting cast is good (Campbell, Chin, and Schreiber are standouts), but everyone mostly falls in step with their stereotypical trappings. Johnson’s Will is therefore left to shine so we can remember the power of his charisma beyond comedic ability. Sawyer has some heft in the emotional baggage arena and shows more strength combatting insecurities — while never letting his disability dictate what he can and can’t do — than how hard he can punch. His missing limb is never once exploited as a means to overcome adversity or “prove” himself either. Rather than a crutch, his prosthetic becomes a trusted friend. Constantly calling his decade-old tragedy “lucky” is cringingly flippant, but Thurber’s heart is in the right place.