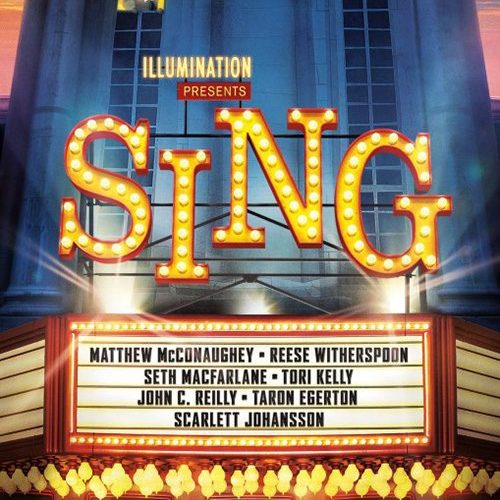 Sing has almost everything required for a Hollywood animation: the big names (Matthew McConaughey, Reese Witherspoon, Seth MacFarlane, Scarlett Johansson, etc.), the chart-topping soundtrack (the rights to the music in this film must have cost a fortune), and, even, a decent premise. The one thing it’s missing — and perhaps the most important quotient – is any real sense of chemistry.

Buster Moon (McConaughey) is our protagonist, an at-times-too-friendly koala bear that’s trying to save his deteriorating (both financially and physically) theater from its impending doom. He holds a singing competition that ends up attracting most of the city, including a stay-at-home pig named Rosita (Witherspoon), a mouthy street performer mouse named Mike (MacFarlane), a punk teenage porcupine named Ash (Johansson), a gangster gorilla’s son named Johnny (Taron Egerton), and a flamboyant pig named Gunter (Nick Kroll). Along the way, he also picks up Meena (Tori Kelly), an elephant with a voice that could stop just about anyone in their tracks and a classic case of stage fright that can’t be easily dismissed. So much potential, yes?

With the exception of Buster Moon’s best friend, a sheep named Eddie (John C. Reilly) and his once-famous theater star grandmother, Nana (Jennifer Saunders), every other character in this grand charade is a stereotype, and in the worst way possible. The lines aren’t funny because we’ve heard them too many times before. The backstories don’t pull at any heartstrings because those heartstrings have already been pulled in the same direction way too often. Worst of all, there’s no sense of authentic spark between the actors voicing this zoo of characters. You can practically imagine Reese Witherspoon in her own isolated sound recording studio, in a universe that’s as far away from Scarlett Johansson’s as Seth McFarlane’s is from Matthew McConaughey’s, and every other actor on this credit list.

Following in the footsteps of recent animation big-hitters, including Zootopoia and The Secret Life of Pets, the one redeeming aspect of Garth Jennings‘ animation is the universe in which it takes place, where brown llamas work at the bank and animals have their own run of the bustling city in which they are situated. It’s entertaining to watch a monkey serve soup to a bull at a five-star restaurant, and one of the film’s few laughs are had when seeing a dog holding up a microphone, interviewing city-dwellers for the local nightly news. But these are just rare moments of padding that occur throughout Sing; they aren’t its meat.

As the story unfolds, mishap after mishap leads Buster Moon to make a promise to his performers that he can’t keep, which eventually leads to the actual destruction of his theater. But, as with all children’s films — and this certainly is one; don’t even bother looking for a moment of higher comedy aimed at the adult parents who will be accompanying their little ones — after the conflict comes a grand resolution. The performers rally Buster Moon, and a free show is put on for the city that, naturally, catches the attention of the media and leaves nearly the entire town’s population scrambling for a view of the show. The gorilla’s gangster father shows up to congratulate him after a brief period of disownment. The stay-at-home pig impresses her dozens of piglet children and their father. The elephant with stage fright steals the show, leaving the audience screaming for an encore. Simply put, everything gets tied up pretty with a bow.

Go ahead, take your kids to see it. They will laugh, and you might, too — but only if you have a sense of humor that ignites when you see a secretary lizard’s glass eyeball continually getting lost in cups of tea and a bull farting from anxiety.