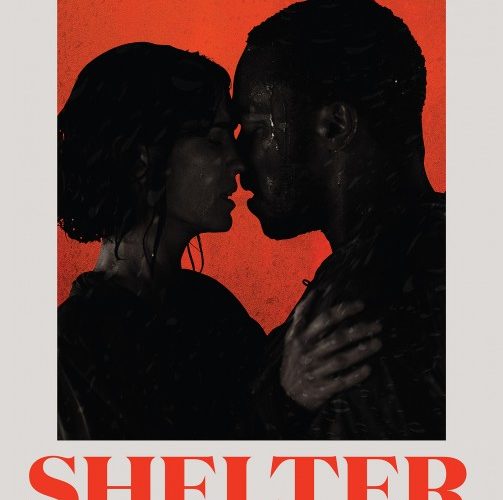 It’s quite comforting to see actors-turned-directors not shying away from tough subject matter. You’d almost assume they would amidst stereotypes of celebrity vanity driving them to worry about losing audience appeal. Looking at a guy like Ben Affleck leveraging a fledging acting career destroyed by bad mainstream choices into a critically acclaimed metamorphosis as an A-list director, however, shows the transition is real regardless of content or perception. I’d rather a guy like Ryan Gosling get derided for taking a chance on Lost River than see him go through the motions devoid of passion. So when it was announced that Paul Bettany‘s directorial debut was a drama about love in the streets, you take note in the why because a subject like that doesn’t get chosen lightly.

Listening to his reasons for writing Shelter is to understand an artist keying in on an idea and finding a story from life experiences to build around it. There’s a dedication at film’s end to “the couple that lived outside my building.” Bettany explains how this homeless pair was a daily fixture—two people to give a “Hello” to in the morning and forget about at night. They became invisible, less human beings to worry about and more common detail born out of New York City living. But then Hurricane Sandy came to evacuate the city. The Bettany clan did so and their eventual return brought the recognition that the couple was gone. Only in their absence could they truly be seen as people in need of empathy. The film therefore becomes a document on our judgment of the homeless—preconceptions and ignorance towards—as well as forgiveness. The former is a common thread from the beginning with Anthony Mackie‘s Tahir sitting at a police desk, bloodied from another officer, being given attitude for saying “Thank you.” It arrives again when Jennifer Connelly‘s Hannah is lewdly objectified by co-eds in French under the assumption that American vagabonds couldn’t have the education necessary to understand them. This is a fundamental issue: our ease at dismissing the problems these souls faced to fall to this social positioning. And therein lies the thread of forgiveness. Tahir and Hannah are on the streets because they cannot forgive themselves for what they have done. They do not deserve comfort or love.

In other words, Shelter is dark. But it earns that right and proves worthwhile as a result. Shot on the cheap over twenty-one days, its handheld cinematography puts us in the mix as these two vagrants wander New York’s garbage cans and dumpsters before setting up shop with coffee cups of change. We are by their side, the other seen in the distance—Tahir stalking Hannah at the start in order to reacquire property lost when incarcerated. Soon they learn to understand each other enough to find trust, that trust blossoming into love despite his semi-devout Muslim and her atheist heroin junkie seeming an unlikely pair. There’s more than meets the eye, though, and they sense it even if they won’t dig deeper to learn why just yet. No, this revelation as to their lives ending up here presents itself through outside forces—wounds closed for too long ripped open to risk derailing any good their relationship has bred from the silence of the past. Who they are is steeped in tragedy with trajectories that mirror each other from opposite directions. They are ghosts, as Bettany describes them, too devastated in themselves to reacquire physical form. They seek redemption knowing the path is an impossible one to climb alone, but they work towards it with each smile and embrace making the possibility seem more real as the numbness melts away. Whereas pain used to drag them down deeper, the other still being there afterwards finally renders it unbearable enough to strive for an escape.

If only it were that easy, though. Bettany isn’t about contrivances to find a happy ending—although he admits to hating movies that put us into a dark place only to leave us there. That tells us the end will at least be bittersweet if not hopeful despite the journey owning every single stumble this type of existence authentically provides. Because it isn’t just that they are homeless. Tahir is an illegal and Hannah an addict. They aren’t married so housing to together is virtually non-existent and NYC’s winter looms with the threat of illness or worse. Even if they can conjure enough hope to stop the cycle of suffering alone, forces outside their control act like chains keeping them tethered without the strength to break free. So, in order to be happy they must relive their torture whether his violent nature or her use of sexual favors for monetary compensation. We as an audience can no longer simply turn away anymore, though. Tahir and Hannah no longer dissolve into the background as the dismissed throwaway “scourge” of society. Their performances along with the histories Bettany creates for their characters suddenly make them into heartbroken citizens of Earth to sympathize with as ambivalent stares of desolate defeat get replaced by tearful, soft eyes of remorse, shame, and fear. It’s an out-of-place moment of fantasy, but their moving in for a kiss before falling through a puddle into an ocean provides Mackie and Connelly rebirth. Our reaction to them before and after exposes our unjust reliance on appearances.

Mackie’s fantastic as Tahir, supplying the role a dignity beyond his current state. Pain and guilt drive him, preventing his ascension back to life, and he sees that same struggle in Hannah alongside the potential for salvation eluding him. Asking Allah for forgiveness is a non-starter because he doesn’t want to be forgiven, but redeeming his soul by giving her what she desperately needs is. Connelly’s as good as ever: initially rejecting that help to not face the fact happiness exists for her if she only welcomes it in before embracing it as the watchful protector of a sick, floundering Tahir. Unhinged at times and composed to the detriment of emotional stability others, she starts remembering the joy tragedy stole. Now tragedy must be endured for its reclamation.