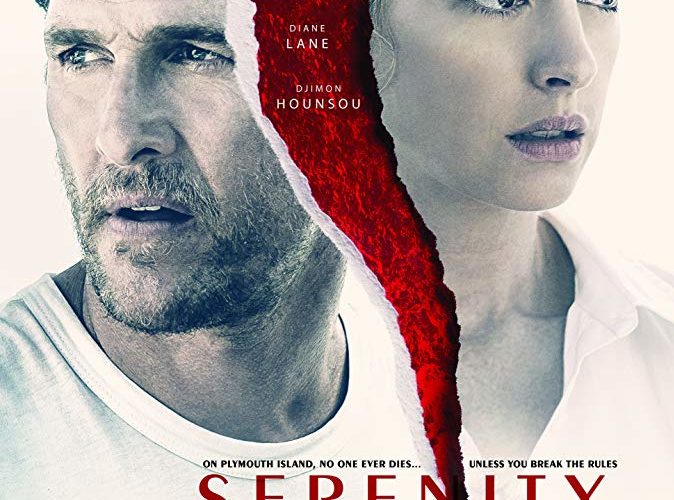 Review: ‘Serenity’ Sets Up a Thriller to Pull it Apart

Above all else, credit to all involved for the audacity. Within the first fifteen minutes or so of Serenity, written and directed by Steven Knight, an old-school noir plot is set into place. We have an eerily pleasant island called Plymouth, a sun-baked sea-boat captain named Baker Dill (Matthew McConaughey) with a tuna obsession and a desperate need for cash, an older seductress with a beachfront view (Diane Lane) and a curious cat, a disgruntled first mate (Djimon Hounsou), and an ex-flame (Anne Hathaway) back in town with a lucrative, deadly proposition.

Hathaway’s Karen promises Baker ten million dollars if he takes her abusive husband (Jason Clarke) out on his boat–named “Serenity”–to kill him and “leave him for the sharks.” Initially reluctant, the money starts to make sense to Baker Dill. Now, there is a lot more plot, though to dive in fully would be to reveal too much. One bit includes a nerdy fella (Jeremy Strong, with glasses) searching for Baker and always just missing him. There’s also Baker and Karen’s son (Rafael Sayegh), a young man never not on his computer, doing his best to ignore the beatings his stepfather is handing his poor mother. The fact that this character is ultimately a cipher with little-to-no development emerges as the cardinal sin in the film.

Narratively, it all congeals about halfway through as Knight chooses to go in a direction that is equal parts shocking and inert. It’s purely ambitious above all else. Though the turn be teased at ahead of the twist, Knight’s ultimate motivations betray all that’s been established. And on purpose! Stakes fall to the wayside in lieu of some existential examination that extends far past Plymouth Island, and the new elements do not quite make up for the loss of the old. McConaughey is clearly engaged with the material, doing all in his power to sell through everything. Sadly, no other cast member has nearly the same success as our lead, Hathaway included. The easiest explanation is screen time. McConaughey is the lead of this picture and the one tasked with pushing what Knight is selling. For the most part, it’s a thankless assignment.

While there are plenty of characters and subplots, there is not nearly enough time to satisfy any of them. Part of this is the construct of the story as a whole, to be sure, but no less disappointing especially when considering the impressive supporting cast. Hathaway is putting on her best femme fatale, complete with an affected voice that seems to come and go throughout. As talented a performer as she is, there’s not enough in the script for any kind of character to blossom. Strong is having fun, as is Hounsou, though both have little to do.

The island setting is inviting and lends itself well to the eventual deceptions, all captured mightily by cinematographer Jess Hall, but these visuals are often betrayed by a tonally confusing score from Benjamin Wallfisch. One can respect what Knight is trying at, while never fully buying into it. Despite the talent and the brazen originality, Serenity‘s reach exceeds its grasp.