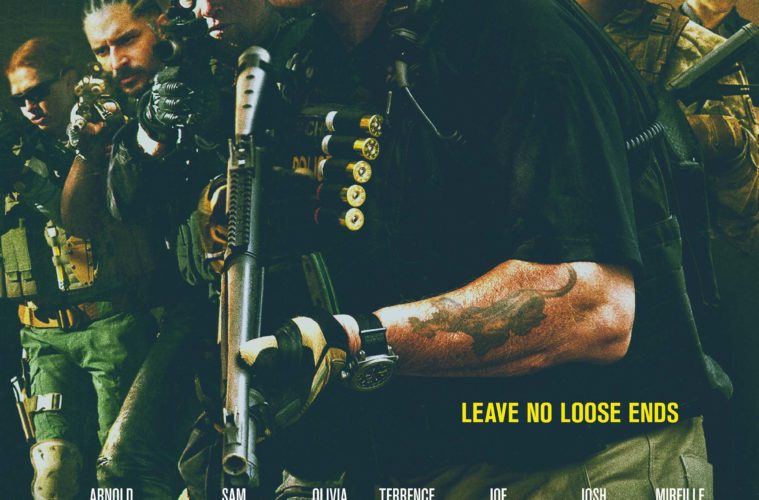 Directed by David Ayer, Sabotage isn’t quite the police procedural-meets-character study of his previous feature, and his finest work, End of Watch. Ayer, interested in the psychological effects of violence, in Sabotage, has crafted a pointed political commentary rooted in the war on drugs, although the film fails to 100% live up to the allegory promised. The war on drugs itself perhaps can be chalked up to a single Notorious B.I.G. lyric, “mo money, mo problems,” and here that’s fully on display, with more gruesomely executed bodies on the floor.

While the film delivers on the action, it under-delivers on emotional impact the same way that End of Watch does. Obsessed with details, it abandons and short changes them to keep what is an awfully simple and not very memorable plot moving forward. We are introduced to an Atlanta-based DEA strike team led by John ‘Breacher’ Wharton (Arnold Schwarzenegger). The team, including Monster (Sam Worthington) his girl Lizzy (Mireille Enos), Grinder (Joe Maganiello), Neck (Josh Holloway), Sugar (Terrence Howard), Pyro (Max Martini) and Tripod (Kevin Vance) is far from The Expendables. Lizzy is used as bait for the team to gain entry into a cartel McMansion, where the strike team skims off $10 million dollars off the top of a five cubic foot pile of cash.

After an intense six-month federal investigation that includes two agents monitoring Breacher at all times, even in the lavatory, uncovers nothing, and his boss Floyd (Martian Donovan) reinstates him. After all, no one else will have Breacher or his crew, and so, like the Muppets and the Channel 9 news team, the band gets back together. Following a drunken night at a strip club, Pyro (whom we knew too little about anyways) returns back to his RV, which unfortunately has been parked on active train tracks. The aftermath, a gruesome scene, introduces us to Caroline Halloway (Oliva Williams), a take-no-prisoners Atlanta PD homicide investigator who continues to dig. Breacher inserts himself into the situation to steer her, even if the circumstances seem just too convenient. Additional bodies of Breacher’s team are found with signs pointing to a violent Guatemalan cartel. Additional clues emerge, including one that explains what Breacher was watching on TV in the film’s opening scene, a video of a women brutally tortured.

All and all, the moral of the story reflects that of one of the best cop shows TV once had, The Shield. A result of the Bush-era study of the enemy within, The Shield was a disturbing study in violence, street economy and political corruption. Unfortunately, Sabotage is less ambitious, but not without pointed social critique. Consider Mireille Enos’ Lizzy, a drug addict walking a fine line, who is pushed to the limit even as her team looks the other way as she self-destructs.

The team is a group of rough and tumble guys, many formal military, including Tripod, a formal Navy SEAL. They run rough shot, play hard, break the rules and engage in what is a little misogyny and objectification of women, including Lizzy, along the way. In essence, these are not likable guys; they are the operators in the shadows that Dick Cheney occasionally talked about. And if the war on drugs ended they would be out of job, along with the cartels.

While not terribly insightful, Ayer and co-writer Skip Woods attempt to have it both ways. Sabotage is a little smarter than your average run-of-the-mill action movie and it’s a little more knowledgable, as you’d expect from Ayer’s previous work about police work. Still, in spite of a few original elements that can be read as political commentary, it’s unfortunately weighed down by a plot that we’ve seen before and characters we care too little about.