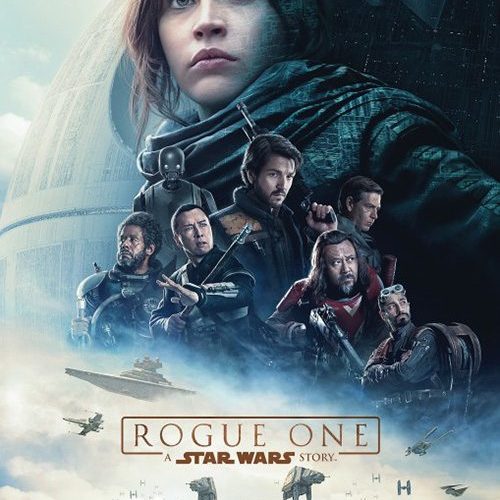 Review: ‘Rogue One: A Star Wars Story’ is Burdened by Franchise Expectations

Star Wars is an expansive universe which ever expands further, slowing down not for a moment to make up for the ground lost by tossing out the Expanded Universe after Disney’s purchase of the franchise in 2012. In part, the original 1977 film captured audiences’ imaginations thanks to its detailed “used future” aesthetic – the sense that every object and character had a story behind them, no matter how fleetingly they were onscreen. Rather than continue this tradition, a great many writers of spin-off films and TV shows, sequels and prequels, tie-in comics and books, video games, and so much more have chosen to reuse the same characters, planets, and props, or to go with off-brand imitations of them. Original Ralph McQuarrie sketches get pillaged for inspiration, rather than try anything new. Once revolutionary, then familiar, Star Wars now appears frozen. Last year’s new feature-length episode basically remade the original trilogy in one go. At least the prequels came up with a good amount of stuff the series hadn’t already showed us.

There will be a lot of praise for Rogue One: A Star Wars Story predicated on it being “dark,” as some sort of return to the tone of The Empire Strikes Back. (To this day, a film program classmate declaring that Empire was the best Star Wars film “because it’s the darkest” echoes in my head.) But while the first in the “Star Wars anthology” films certainly aims for more moral ambiguity than any of the main series, it only goes so far, and it still doesn’t feel terribly different. When a space battle sequence features a Rebel commander who is a fish-man like Admiral Ackbar but not the same kind of fish-man as Admiral Ackbar, it sets my teeth on edge. When there are cameos by those two dudes Obi-Wan carved up in the Cantina (yes, really), it makes me wonder how low these movies can stoop for cameos. When the universe “expands” in this way, it actually makes it seem so much smaller.

So while Rogue One focuses on a team of Rebels stealing the secret plans that are to be the MacGuffin in the original Star Wars, it can’t quite stretch itself to be more like a war film or a spy film than a traditional Star Wars adventure. The actual business of stealing those plans doesn’t coalesce until around halfway through – before then, it mucks about with introducing the characters piecemeal, with the group building as they hop from planet to planet after each new flimsy objective comes up.

This would be perfectly all right, except that these figures, while all portrayed ably, are only distinct in their designs. Once again we hit the blockbuster problem of characterization via a single trait or baseline arc. Jyn Erso (Felicity Jones) is a loner who comes to care about the Rebellion. Rebel spy Cassian Andor (Diego Luna) softens his steely “at any cost” attitude toward his work. Reprogrammed Imperial droid K-2SO (voiced by Alan Tudyk) is snarky and plainspoken. Chirrut Imwe (Donnie Yen, given the blind Asian martial arts master role; really, Hollywood?) is not a Jedi, but believes in the Force. His companion, Baze (Jiang Wen), doesn’t, and also has a big gun (he’s also one of those characters whose names I’m reasonably sure are never actually said in the film itself, leaving the credits and promotional materials to identify them). Defecting Imperial pilot Bodhi (Riz Ahmed) is, uh, nervous a lot. Though writers Chris Weitz and Tony Gilroy would no doubt cite plenty of classic “men on a mission” films as inspiration, this team is hardly distinct and barely even feels like a team.

This is a shame, because the idea of a Star Wars-based men on a mission film is tremendously appealing. But why, precisely, can Rogue One not simply start with these guys already all on a team, set them on their mission, and then reveal them as characters through their interactions and trials? Or do the thing where the gruff leader recruits them from the Rebel ranks one by one in a crisp montage? There’s also the baffling decision to simultaneously treat the dreaded Death Star, the object of those secret plans, as both a taken-for-granted presence (since the audience already knows what it is) and a “mystery box” (since the protagonists don’t). Already wasted space, this setup feels even more pointless when the real action gets going in the back half of the story and is all but forgotten.

Despite all this, Rogue One is a reasonably enjoyable film in the moment of watching it. The one comparison to Empire which I’d deem appropriate is that both movies are propelled by great urgency, here because the Rebels are racing to track down their info. And while it can’t let go of the essential Star Wars sentimentality to the extent it pretends, it’s still gratifyingly ruthless where it counts, offing people left and right. When the time comes for characters to make sacrifices, such actions better advance the movie’s themes about building hope in revolution better than any speeches. Blockbuster characters have had some trouble dying as late (hello, Marvel), for fear of curbing their profitability. There’s none of that here.

Action is Rogue One’s strongest suit, and what makes all the faffing about bearable. From a shootout in the confines of a desert city to a rain-soaked dogfight by a mountain to the long final battle, director Gareth Edwards prioritizes intensity and desperation. All credit, here the (star) war truly feels like a lopsided conflict where our heroes are clawing against an inexorable downward slide… even if Stormtrooper armor seems more useless than ever (Chirrut can beat them up with a staff). The finale also features possibly the best Darth Vader action beat ever.

Unlike some of the other cameos (again, the ugly dude and the butt-faced guy from the Cantina, good lord), Vader’s makes sense, and it helps that he’s restrained to two scenes. Likewise, while he’s here by the grace of a body double, a Peter Cushing voice imitator, and a big load of dodgy CG makeup, Governor Tarkin is also back, and is used well — as a proper posh Imperial asshole. Further Star Wars anthology movies would do well to take the right lessons from what Rogue One is and isn’t able to pull off. A little of the mainstay Star Wars stuff is fine, but for crying out loud, please invent new spaceships and aliens and planets and characters who can both stand on their own and aren’t variations on what already exists. It’s possible. It’s been done before. They called it Star Wars.