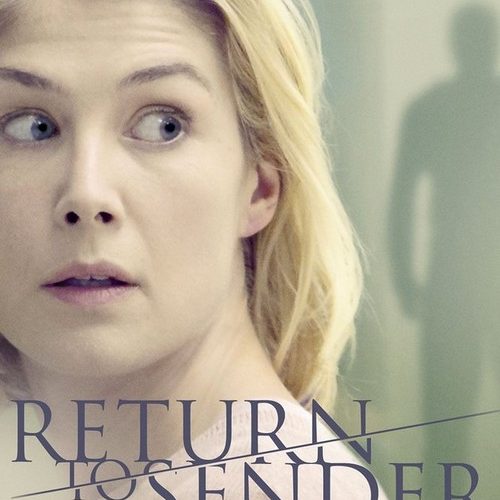 Return to Sender is an equally repulsive and dreadful movie that deserves to be more than spoiled — it should be murdered, buried, and never discussed again. There is nothing the world can gain from this loathsome project except toxic ideas, its representations in baffling disgusting taste of a personal horror that deserves extreme respect from filmmakers that choose to express it. This is the story of a woman (Rosamund Pike’s Melinda) who is raped, who then emotionally connects with her rapist (Shiloh Fernandez’s William) while he’s in prison, has him think that she might want him sexually, and then when he gets out, she traps him, performs some type of surgery on him, and then murders him. With all of this in mind, please notice the title chosen for this movie.

Rosamund Pike is the one who makes this tiny project dangerous, which would be obscure and insignificant without her star power. In her Oscar-nominated performance in David Fincher’s Gone Girl, she played a calculated, manipulative housewife who ruined men with her orchestrated rape charges, embodying the villain for a society that questions the allegations that are brought to legal attention (never mind the many more that are not); a society that dares wonder if 35 women are just looking for camera time when sharing the cover of New York Magazine, or the same to be said with the women who appeared in Kirby Dick’s documentary The Hunting Ground – all with their names, faces, and stories front and center. With Gone Girl in Pike’s rear view mirror, she plays another externally nice blonde from Missouri, who actually is a rape survivor, but is just as unquestionably villainous (once the story decides to tell us so) – she let her mother die when she was young, she poisoned her father’s beloved dog, and now she’s trapped, tortured, and murdered her assailant in her basement.

In this movie, honorary Men’s Rights Activist rally speaker Pike does an even worse thing than her previous “Amazing Amy” character by daring to speak for rape survivors, at first. Her character embodies these very difficult mentalities after trauma, expressing things like “Bad things happen, and you make the the best of them.” Or, “The way I see it, hating him only hurts me.” These end up being the words of someone who is lying about them, and who can’t be trusted for their own deviousness; Melinda is a character that goes far beyond the notion of simply being vengeful. She is not only getting physical revenge against her assailant, but in the process makes an unwarranted, appalling mockery of survivors.

By no coincidence, there is no moment in which this garbage renders as pleasant. Before the assault happens, the movie has dumb banter and no direction, other than that Pike’s character Melinda can perform a tracheotomy on the spot. After the assault happens, it is really hard to watch the movie treat her trauma as a rape survivor with vicious nonchalance. She can’t sell her house as she had planned, because everyone knows what happened. We also have to watch her try to play a game like “Operation” by herself, even though it’s established that the trauma of the events make her hands twitch. She can’t even put frosting on a cake without squeezing too hard, one of many moments here that is given extra dramatic attention by the sound designer.

It is not by any form pleasant to see this movie try to convince its audience that Melinda’s story could become that of a romance and/or redemption story, that she’s finding peace in emotionally connecting with her rapist. (They connect over the idea that they are fixers; she fixes people, he fixes things, as a handyman.) She is a woman who has no life outside of her job, and lies to her father (Nick Nolte) about going to therapy (when she’s going to the prison), who shows more smile and skin each time that she sees her rapist. Meanwhile, per Fernandez’s bootleg impression of a snaky Joaquin Phoenix, he is excited about seeing her, but might have something else in mind. As one can imagine, it is not enjoyable in any shape or form to wonder whether a rapist will attack again once he gets out of prison, whether its Melinda or someone else. When this script’s abhorrent war against humanity reaches its revenge climax, it is not rewarding to see an even bigger prank job on very real pain.

Because it has no intelligence to express, this disgraceful filmic enemy to basic morality functions in twists of withholding its information. Each twist of its story also doubles as the plot going to where it should not. It is withheld what she’s doing when she randomly starts writing letters, all of which get returned, until we see her sit down, and pick up a phone inside the prison. Later in the story, it is withheld what Melinda’s intentions are with getting William to come to her house after he gets out of prison, until her ultimate plan is revealed. Each twist makes this story dumber, and somehow more offensive.

The director of this film is Fouad Mikati, previously of Operation: Endgame, a profoundly forgettable shoot-‘em-up that wasted the likes of Zach Galifianakis, Adam Scott, Rob Corddry, etc. He is a troll with a movie camera who has thankfully not made any other features, but unfortunately made this one. The casting of Pike might make one curious, but if you’ve made it to the end of this review, and have not seen the film yet, hopefully you will venture past, aiming your curiosities higher than this hideous thing.