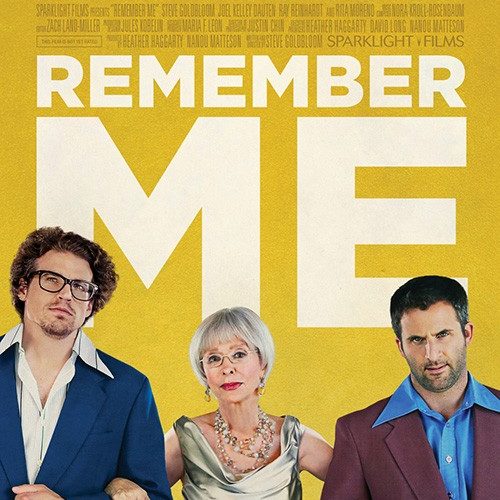 Review: ‘Remember Me’ is a Humorously Tragic Dramedy

I’d assume the majority of people treat/treated their grandparents as somewhat of an escape. They were family who you loved and cared for that had a home you could stay at whenever you wanted. So you showed face once in a while to do your due diligence in case that guest room was needed in the near future. Maybe you took them to a show, kept them company, or simply shared a meal. It’s a nice gesture—one that scores karma points on a nonexistent scale your conscience cares about anyway. Suffer through the small talk. Endure the awkward silences when pleasantries are exhausted. Check your watch, “remember” a necessary task, and stage your exit until next month’s session. In Remember Me, Vincent Seder (Steve Goldbloom) has it down to a science. His self-absorbed buzzkill of a voiceover anchor—who fancies himself a journalist despite the fact he never leaves the country and only reads from a script he didn’t even prepare—is ready to enjoy one such rendezvous with Pappy (Ray Reinhardt) and Nanna (Rita Moreno). The impromptu lunch is somewhat derailed, however, when the door is opened by his equally self-absorbed (but much more outgoing) cousin Barry (Joel Kelley Dauten). He’s there because he needed that place to stay as his stand-up, acting, and Uber driving careers are currently in a “dark” period. So now the awkwardness is increased as Nanna, Vince, and Barry squeeze onto a loveseat. The boys assume she’s making lunch and she asks what they’re having. We sit smiling, waiting for the punch line.

Well, Goldbloom (who wrote and directed) doesn’t disappoint as Remember Me takes a turn that ultimately sets up a path to both comedy and drama. While Nanna sleeps, Pappy passes away from a stroke. Since we know instantly that neither of these man-children have the mental maturity to handle this, it’s unsurprising when Vince starts laughing and Barry shuts down. What’s there to do? Call a doctor, call a mortician, and keep Nanna away from the action. They probably should tell her what happened, but that would mean they thought she was the most important person in this delicate situation. In their minds, however, they are. Pappy ruined their hands-free relationship. So they panic, more-or-less kidnap Nanna, and start driving to Memories, an assisted living residence on call.

It’s a humorously tragic scenario that excels thanks to its performances. Dauten and Goldbloom enjoy an infectious chemistry as two totally opposite men trying to traverse their unexpected circumstances. The former is a goofball who’s often funny because he’s not and the latter a wet blanket you love to shake your head at because he’s always looking for an angle with which to extricate himself from the situation. And while Moreno’s Nanna is introduced in a near-catatonic state thanks to the pharmacy of pills she’s forced to take, she proves a firecracker of sarcasm, profanity, and a free-spirited lack of inhibitions later. It could be because she’s in shock (the emotions hit her eventually in a poignant moment), but she’s ready to “let it rip” with her grandsons.

The sheer absurdity of their predicament and the contrastingly combustible personas involved renders the film’s first half fast-paced and quick-witted. Barry is a buffoon, but possesses the confidence to never be a pushover. Vincent is book smart but wholly unprepared for social interactions, his insecurities and shyness always pushing him into even wilder situations. They nag on each other, talking incessantly until Nanna has to butt in with a retort that’s able to shut them both down out of respect or embarrassment. She’s clear-headed and strong for the first time in years and she’s not about to squander that vitality even if it means she’ll be moving towards a devastating low when the weight of everything hits her. We’re merely along for the ride—wherever it takes them. Things do fall apart somewhat in the second half, though, as Nanna is separated from the boys for lengthy stretches that forget how integral to the plot and their journey towards emotional growth she is. I’m not saying Dauten and Goldbloom can’t sustain our interest by themselves, just that I kept wondering what Nanna was doing and how she could derail their fun or force them to be adults for once in the lives. So while a scene of Vincent and Barry working in their hotel room has a worthwhile payoff during the end credits and a potential tryst with two eccentric women culminates into a worthwhile (albeit juvenile) aftermath, neither supplies the same panache as when Nanna it there injecting her deadpan barbs or stoically immobile opposition.

Moreno is the highlight. Any trepidation about her taking a role where we’re meant to laugh as she squeezes mustard onto her hand is erased as soon as she’s allowed to spread her wings. Her Nanna becomes everything Vincent and Barry never acknowledged. She shows that she isn’t an albatross, but a living, breathing, and entertaining individual. So while the two of them were initially gung-ho about leaving her in the old folks home, that inherent feeling of her being a burden gradually disappears. Maybe they’ll look into their hearts and realize this before it’s too late or maybe they won’t. But wouldn’t a little extra work to have your grandma bust your balls in the wild instead of being rendered comatose in a prison be worth it?