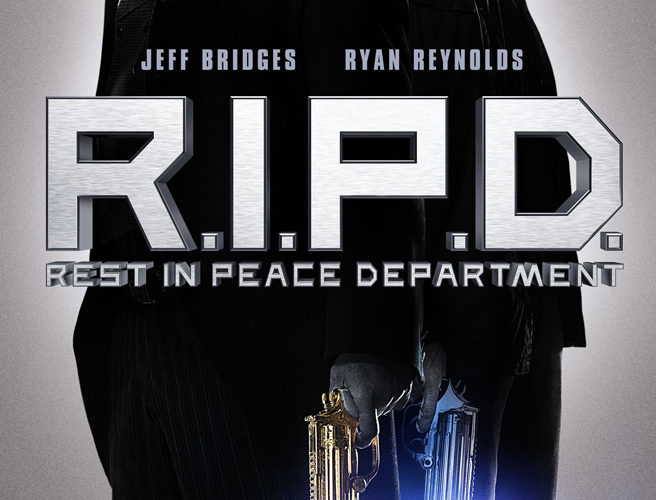 There is a lot that is thrown into the boiling Hollywood pot that is R.I.P.D. Directed by Robert Schwentke, this afterlife crime-comedy saga takes from just about every high concept studio picture that has come out in the last 20 years — but in this age of vast re-appropriation, that’s hardly a death knell.

Ryan Reynolds stars as Nick Walker, a Boston cop with a few sins under his belt. Killed in a ridiculously over-the-top shootout, Walker finds himself momentarily frozen in time, then shot up into a vortex that lands him at a desk across from Proctor, played by the always-scene-stealing Mary-Louise Parker. Proctor informs Walker that he is, of course, dead, and now a member of the Rest In Peace Department. His new partner is Roy (Jeff Bridges), a gun-toting lawman from the Wild West with a rather silly disposition to go with an even sillier accent. And while we can all agree that Mr. Bridges is an iconic performer that should be cherished, we must also admit that the man is fallible. His schtick here wears thin about 30 minutes into the film, and he’s introduced about 15 minutes in.

Reynolds, on the other hand, is very game in the role of leading man. This is the kind of funny, charming and even touching performance that we should have gotten from the actor in last year’s lazy actioner Safe House.

Together, Nick and Roy must rid the world of Dead-os, souls who have slipped through the grasp of the R.I.P.D. The two banter and bust chops while the rickety plot – from screenwriters Phil Hay and Matt Manfredi – builds around them at a thankfully brisk pace. Let me take this moment to compliment the filmmakers on the running time: 96 minutes. It may sound crass and even shallow, but amidst a slew of over-long blockbusters (I’m looking at you Star Trek Into Darkness, Man of Steel, The Lone Ranger, Pacific Rim), this film thins out any unnecessary subplots and focuses on our two heroes and their bout to save mankind from the dead monster people. Sadly, the dead monster people bit is where the film never really works. Though the world Schwentke and his team introduce (based on the comic book from Peter M. Lenkov) has all the makings of four-quadrant, PG-13 fun, it never quite comes to life, pun intended. Where the secret world in Men In Black gave us memorable characters (like those small, beer-drinking aliens and Vincent D’Onofrio’s insane cockroach-man), there’s not much to go on here. Limp attempts are made (Robert Knepper plays a nervous Dead-o for the briefest of moments, and then there’s another one who imitates Elvis), but none stick in the slightest.

What we are left with is a mildly entertaining, utterly harmless mid-summer blockbuster that marks another misstep in the career of Ryan Reynolds. Much has been invested in this performer’s good looks and agreeable on-screen persona, a solid alchemy that has made many a movie star. But for every Brad Pitt there is a Chris Klein or Josh Hartnett. Reynolds may have all that’s necessary to sell big movies, but the big movies he’s been selling feel tired and uninspired.

Let’s all hope, if anything, the result of R.I.P.D. provides a necessarily jolt to Reynolds’ creative instincts, so we can all watch the performer bloom like we know he can.