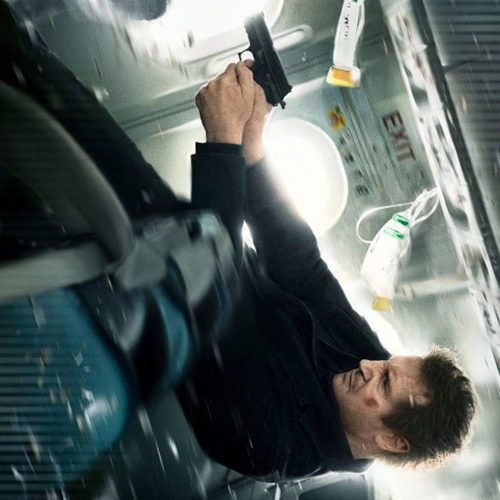 Deflection could have just as easily been another title for Non-Stop, because screenwriters John W. Richardson, Christopher Roach, and Ryan Engle (none of whom instill a stellar track record for Hollywood blockbuster success) have a lot of fun making sure to inject as many red herrings into the mix as possible. Even at the start we wonder if our prospective hero Bill Marks (Liam Neeson) could be the perpetrator, despite trailers leading us towards a frame job. His U.S. Marshal is an alcoholic, hot-tempered, and forlorn. A semi-threat to his boss about not getting stranded overnight in London shows he may be willing to act against the professionalism of the job. And with a liberal indictment of said career heard via his car radio, you wonder whether this whole endeavor may go beyond a simple hijacking. After the entertaining thriller Unknown, Neeson reteams with director Jaume Collet-Serra for what is not only the Orphan helmer’s best work, but also a pretty good film in its own right. What starts as a taut suspense thriller concerning one man against a plane full of anonymous faces—one of which is a murderer declaring someone will die every twenty minutes unless 150 million dollars is wired into his account—does devolve into an all-out actioner by the end. However, even that change of pace proves an adequate trajectory, considering something has to be done when the killer’s identity is revealed. The perpetrator isn’t just going to give up or slip, fall, and bash his head in. No, Neeson’s Marks is going to have to get dirty and show a little of his Taken physicality to save the day. And while we see some of that early—the bad guy doesn’t say who will do the killing, after all—the film’s at its best during the quieter moments. With an extensive supporting ensemble, there are way too many characters to pinpoint a hypothesis with any real certainty. It helps, too, that so many stereotyped creepers were cast, making us wonder which it might be if they aren’t throwing us off the scent of a more innocent face. You have Scoot McNairy’s squirrely schoolteacher, who told Marks outside the airport he was going to Amsterdam before boarding this flight to London. There’s the ever-shifty looking police officer Corey Stoll, begging you to believe his scowl has nefarious thoughts behind it. Anson Mount is a fellow Marshal with pure smarm; Omar Metwally’s Dr. Nasir is a token Arab, profiled terrorist; and Corey Hawkins as a insubordinate, loudmouth, angry youth makes you wonder if he could have an agenda. And that’s not even mentioning the countless other men staying silent, biding their time.

Then there’s Julianne Moore’s somewhat secretive Jen Summers, going out of her way to secure a window seat next to Marks. There’s flight attendant Nancy (Michelle Dockery) who knows Bill, might be having an affair with the co-pilot, and the one person to be trusted purely because she’s friendly with those we assume are good. Lupita Nyong’o’s attendant Gwen was a late addition to the manifest, filling in for someone who couldn’t work; Bar Paly’s sexpot Iris is engaging in sexual indecency with her older companion in what could possibly be an obvious deflection from true intent; and who really knows if little Quinn McColgan’s Becca doesn’t have a bomb in the teddy bear she let Marks bring onto the plane for her? There are so many possibilities and even more players. Only Neeson’s Marks knows what’s happening, though, as the terrorist texts him on his secure Marshal line. The unknown villain paints Bill into a corner countless times to make it seem like he’s to blame, all while hiding in plain sight as everyone wonders about the Marshal’s state of mind. We do the same, thinking it might be some elaborate plot or possibly a case of schizophrenic, multiple identities wherein Marks doesn’t know he’s acting under his own volition. He recruits helpers with little trust, alienates those who backed his every move, and sits in contemplation as angry passengers plot to take him down before he may fly them into a building. Hidden truths alluded to at the start come out, close-quarters fisticuffs begin, and the digital age of social media wreaks its havoc.

And I found it absolutely riveting. I know it’s Hollywood schlock with a convoluted story leading me away from the truth, but I bought in and let it unfold without trying to guess the outcome more than twice. Clichés get subverted, familiar faces pushed to the background to raise suspicions, and black and white protocol followed as the TSA severs ties in the obvious assumption Marks is guilty. Neeson plays it with a nicely sharpened edge, always vigilant and wary of the hundred prying, scared, angry eyes looking back. Collet-Serra lets the airplane’s confined space become a character itself — including an impressive, extensive single take, albeit digitally rendered — and we buckle our seatbelts in the hopes everything turns out OK. Non-Stop may not amount to more than a exhilarating ride at the cinemas, but that’s often enough every now and then.