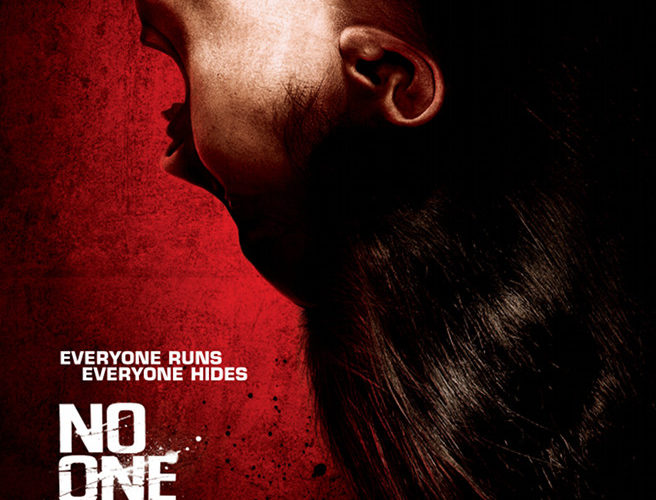 [Review] No One Lives

When the WWE logo appears at the start of Ryûhei Kitamura’s No One Lives, it feels out of place with the film’s horror movie expectations. After about an hour of Kitamura’s absurdly violent and patently trashy claptrap—complete with two women randomly tussling with one another—the connection makes much more sense, although even the WWE seems too classy for this particular alliance.

After enduring the last few years’ onslaught of icky films trying to pass off dubious torture as legitimate thrills, I thought I had seen just about every conceivable mutilation of the human body. Turns out I was wrong, but I’m surely one step closer now that I’ve lived through the moment where this film’s serial killer guts one of his victims and hides inside the rotund man’s fleshy corpse like he was a Hoth Ton-ton. That’s just the tip of the iceberg in a movie full of so much dismemberment and chunky goo that it might as well be on the surgery channel. Kitamura, whose Versus,Azumi and Midnight Meat Train specialized in over-the-top action and gore, goes off the rails with No One Lives, which starts with an intriguing hook and quickly spirals into an inexplicably dull slasher film. There’s some promise in the beginning, as Driver (Luke Evans) and Betty (Laura Ramsey) are heading across country when they run afoul of some backwoods criminal types who take them hostage and threaten them with harm. What looks to be headed in conventional torture territory takes a wild turn before ultimately ending up in that sub-genre’s close cousin, the amoral splatter flick. The trailers give away this bait-and-switch and so I’ll talk about it here; after Betty ends up the first of many dead bodies, it is revealed that Evans’ Driver is a homicidal killer himself, and he’s got a kidnapped heiress (Adelaide Clemens) locked up in his trunk. The remainder features the clueless, bickering thieves getting picked off one by one as Evans stalks through the night like Rambo crossbred with Jason Voorhees. Any hope of this being a balanced, tension-filled struggle between good and evil evaporates early; this is evil vs. evil, with no single character being likable and all of them sans Evans being dumber than a box of rocks. About ten minutes with these guys and gals and you are sincerely hoping that the film’s title isn’t false advertising.

Evans has had an eventful couple of years as an actor, and shouldn’t have any problem hiding this clunker on his resume, which is fortunate because he’s not really very good as Driver. The script is as creaky as they come, and almost all of the truly cringe-worthy lines are delivered by Driver, who gets a trade-off in the fact he’s also the one committing the more memorable murders. Clemens is actively irritating as Emma, the heiress, although that’s as much a fault of the writing and direction as anything else. The less said about everyone else, the better. Kitamura can shoot a stylish scene, but he’s not especially worried about stringing those scenes together into something coherent or visually engaging. A sense of humor would have gone a long way to improving No One Lives, but instead every clever death scene is played or grim seriousness and the excessively sadistic atmosphere dampens the colorful promise of Evans’ deranged killer. Not only does no one live, they never smile or make smart decisions either, and even last year’s The Collection presented us with a more interesting group of lugs than the human trash Kitamura provides.

If violence and seediness for its own sake doesn’t bother you, maybe there will be something for you to admire in Kitamura’s latest, which at the very least prides itself on inventive slaughter. If, however, you require even the slightest of human traits in your horror thrillers, then it’s best to avoid this one altogether. Forget No One Lives — in most theaters the real problem will be ‘No One Stays.’

No One Lives opens on Friday, May 10th.