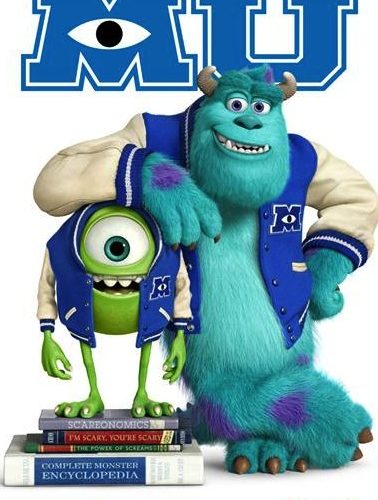 I suspect that when people look back at the legacy of Pixar, there will be a clear, dividing line in their catalog; everything before Toy Story 3, and everything after. That early, golden period of invention, that saw the creation of singularly alluring works like the original Toy Story, Finding Nemo, The Incredibles, Ratatouille and Wall-E, culminated in Up, a beautiful, mesmerizing contradiction of tones and influences. Up was the studio simultaneously at its best and most redundant, creating a crossroads for the future. One path led to stranger, more emotionally nuanced fare, the kind suggested by that wordless but deeply touching, romantic montage or the giddy wonder of the old curmudgeon’s house taking off in a Roald Dahl-esque flight of discovery.

The other led to what would be the continuance of Pixar’s established and formidable selling brand, a world of ready-serve family platitudes, action scenes tailored for 3D, and comically dependent side characters that look great on a toy shelf. Toy Story 3 arrived as the first pilgrim on this new highway, and the results were sweet; poignancy and pandering were twined together to form a film that was easily the equal of its series brethren. Since then, films like Cars 2 and Brave have trundled the same road with less invention and spirit, and while it’s never been suggested by this critic that Pixar has sold out, they clearly have entered a new era, one with adjusted expectations. When Monsters University was announced, a prequel following best buds Mike Wazowski (Billy Crystal) and James “Sulley” Sullivan (John Goodman) back to college, I was legitimately disappointed. Everything about this concept felt like an excuse to return to one of the studio’s most original and enchanting universes with a plot that all but ensured nothing new or interesting would be done with it. For those, like myself, who hold the original Monsters Inc. as the real creative turning point for the studio—when their feel-good tales evolved from charming, innovative ‘kid’s films’ to unique, full-bodied all-audience adventures-–Monsters University represents an unfortunate downsizing of the bravery and imagination of Pixar’s early days. There’s very little in the first reel of this kid-friendly take on Revenge of the Nerds that’s likely to change your mind on that. Despite familiarity, a prologue featuring a tyke-sized version of Mike meeting his childhood hero “Frightening Frank McCay”, is both legitimately funny and predictably heart-warming, reintroducing the industrial ‘scarehouse’ of the first film and those enchanted doors that open up on bedrooms the world over. Here Mike gets his first taste of ambition, determined to go to university and become a top scarer, just like Frank. It’s an obvious opening, but one that pulls the right heart-strings and nods in all the right directions, helpfully shifting the series’ perspective from Sulley to Mike.

When Mike gets to college, sure that hard work will result in waltzing away with his dream job, Scanlon and the writers conjure up a series of comical misadventures birthed from 80’s frat movies and furnished with the adolescent chutzpah of J.K. Rowling and Suzanne Collins. If the classes and competitions of Monsters U lack the urgency and mortal stakes of those fantasias for the slightly-older set, the film recoups the deficit with a visual dexterity that keeps things hopping when Mike and Sulley finally meet. The big joke of course is that Mike’s expectations for college are almost immediately turned on their head by burly, boorish Jimmy Sullivan, a slacker with natural talent that’s coasting on reputation. While Mike’s expecting to bond with his roommate, the sinister chameleon Randy (who all will recognize as the villain from the original), his puny, green, grape-shaped frame keeps conflicting with the furry, pompous, good-time guy who has the latent skill Mike knows he has to bust his butt to achieve. Shenanigans get Mike and Sulley kicked from the program, and the film’s soggiest section focuses on them striking a deal with the imposing Dean Hardscrabble (moves like an insect, has wings like a bat, sounds like Helen Mirren) to compete in the annual Scare Olympics. If they win they get re-admitted to the program, and if they lose they leave MU in disgrace. That of course, requires them to join a fraternity because the games are structured according to Greek rules and all of the good houses have been filled. They get Oozma Kappa, a metaphorical island of misfit boys that includes the likes of Don Carlton (Joel Murray), a would-be computer nerd who’s returned to college about ten years after the fact, Art (Charlie Day), a philosophical wormy thing that looks like he slunk off someone’s dashboard, Squishy, an easily dismissed and oft forgotten blob, and Terry and Terri (Sean Hayes), a literally two-faced extrapolation of that guy in college whose alarming discord with himself always made him the partner you never wanted to be stuck with. Mike and Sulley, working through their own fundamental differences, have to shape these guys up or ship out.

Things play out about as you would expect, although an abundantly talented team of artists have a good time running their characters through the challenges and varied pitfalls—and pratfalls—of collegiate expression. I have yet to see a Pixar film that, in some way, wasn’t beautiful to behold, and Monsters University is no exception. I was never convinced by the slap-dash, hyperactive world of Cars 2, bundling everything familiar into a long, cluttered line of exhausting visual cues, but director/co-writer Dan Scanlon takes the similarly frazzling milieu of the Monsters U campus and makes it a kaleidoscope of literal creature comforts.The wild, witless improvisation of college life is given a Sid and Marty Croft style makeover that features flying saucers tossed like frisbees across campus, an entire aquatic wing for the marine monsters attending class in a world below the feet of their terrestrial brethren, and a nighttime prank with a rival frat that involves a mascot beastie that looks like it was sired by Jim Henson or Maurice Sendak. A good bit of this, no matter how well done it gets, feels like treading water and by about the halfway mark I was convinced that Monsters University would spin its gears to a pre-ordained conclusion that would waste the welcome and sincere chemistry that Goodman and Crystal almost immediately rekindle when their characters collide. In Monsters Inc. Mike and Sulley were workplace pals that had long ago calibrated their personalities and expectations to form a perfect, platonic dream team. Scanlon reverse-engineers them to this pivotal point where they had to cultivate and come to appreciate that potential partnership, and the two voice talents and their respective animators carry the first half. Just when the film looks to give them a pat and simplistic solution to their worries, Monsters U channels the Pixar that we fell in love with, and for a brief time, saves the day again.

Through Mike and Sulley’s meeting, their rivalry, bonding and leadership of Oozma Kappa, the movie flits along as an entertaining trifle, epitomizing the acronym of the monsters off-beat frat. Then, with everything set to wrap-up on that most disingenious of Disney platitudes, ‘if you can dream it, you can do it,’ Monsters University turns that expectation on its head in an interesting and honest way. Up to this point, the families in the audience have been watching a safe, cute little movie reinforcing the same fairy tales we tell our kids without really believing them.

Through a touching and sincere finale, that puts the rest of the slight but sweet film in perspective. Mike and Sulley learn that sometimes there’s a gulf between your initial dreams and where you finally end up, and that all of us may have aspirations that outflank our aptitude. Without being glum or defeating, the script adds a welcome note of humble hope; we, each of us, must aspire to the best that we can be, and when we find others that can share in making us better, it’s worth the risk and effort. In that moment, Monsters University—while not racing to the top of the Pixar pack—becomes their best outing since Toy Story 3, reminding us that what we love about the studio is not rooted in gorgeous animation or big-name voice-acting, but in their understanding of the joys and pains of the real world, of the way in which we struggle to reach our dreams and are grown by both success and failure. Monsters U might exist somewhere in the middle ground between Mike’s diligence and Sulley’s cheerful apathy, but in the end it does turn out just a bit better than OK.