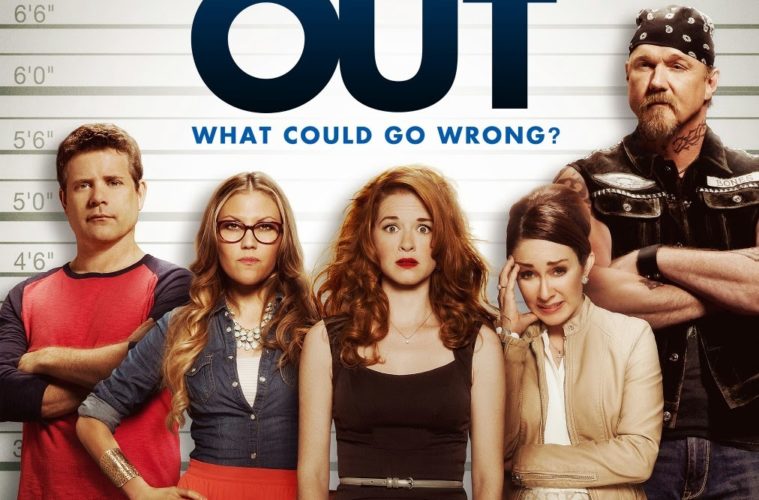 Entertaining in moments, but not terribly progressive, Moms’ Night Out presents an aspirational film that we rarely see in — dare I say — the “secular media,” with its liberal values. The film calls for a return to fundamental values, including the traditional family that features a stay-at-home mom and a father whose sole task is as the breadwinner. While films like Saved have parodied the faithful, Moms’ Night Out turns the tables and parodies those that have strayed from God; this includes an impersonal upscale restaurant and a biker gang that runs a tattoo parlor. So much for not judging people by how they look, as a later scene reveals one of them underneath it all is also a son of God. The film parodies those with a tattoo as a wild child, just as a hip movie might poke fun at “squares” in Middle America.

Sarah Drew stars as Allyson, a mommy blogger who chases after her four kids while dad, Sean (Sean Astin), focuses on work. Allyson knows her duty is to her husband and feels guilty when things become overwhelming. Proposing a Moms’ Night Out with her pals Izzy (Andrea Logan White) and Sondra (Patricia Heaton), who happens to the wife of the local pastor (Christian filmmaker and star Alex Kendrick), Allyson feels guilty even in interrupting Sean’s video game night. Sean graciously agrees to the interruption and later, when her guilt returns, Allyson reminds herself that her husband approved, therefore it’s “biblical.”

Unfortunately the filmmakers, Andrew and Jon Erwin, aren’t interested in modeling progressive behavior, which is a shame. I certainly believe it’s good when fathers are more present in their children’s lives — why not model an evolved masculinity? The film attempts to balance the equation a bit in the form of Bridget (Abbie Cobb), a single mother who we assume had a child out of wedlock. She’s a hard worker but presented as a women with “no filter,” putting in hours on weekends as a bowling alley waitress. Drew, however, is a funny and likable leading lady if not borderline obsessive compulsive. Her obsessions and responsibilities make her go mad to the point where a mommy blog is presented as the only viable release; Sean certainly doesn’t offer all that much help. From a particular perspective, the politics of Moms’ Night Out are indeed warped, including a cringe-inducing admission Allyson makes when she phones her stolen van into the police; it includes a bumper sticker that reads “My homeschooler is smarter than your honors student.”

That about sums it up — Moms’ Night Out seems, despite the technology, curiously dated and a leap backwards for moms, including the single ones like Bridget. The fact that they’re having this night out, which should be a weekly if not monthly occurrence given how stressed they are, is in itself odd. Moms’ Night Out turns into a comedy that’s very similar to the little-seen Nickelodeon film Fun Size, as the moms go through one obstacle to find their kids, notably a detour into a biker gang-run tattoo shop.

It’s my hope the feature could, as a message film, inspire a dialogue in these fundamental households about that level of stress. Allyson doesn’t have it all and it’s a trait that, despite how depressing it is, sometimes feels real underneath the layers of over-the-top comedy. Other film critics have dismissed Moms’ Night Out as a dangerous film, but truth be told there is a far more dangerous film playing in your neighborhood multiplex right now called The Other Woman. The Other Woman, despite having three strong leading women, represents an epic fail of the Bechdel test, Moms’ Night Out exists happily on the other end of the spectrum, calling for a return to traditional 1950’s values as Allyson discovers her place is at home with her children and blog. The woman with a child out of wedlock and with a fun, but irresponsible, baby daddy, isn’t glamorized; instead Allyson and the film, at least a first, lightly mock her.

With a PG rating, Moms’ Night Out is a faith-based comedy that exists at the other extreme of the aforementioned The Other Woman, but both films are cringe-inducing in their own ways. Yet I’m sure their individual target audiences will enjoy them. As a message film, Moms’ Night Out succeeds for its core audience which will have a good time, and truth be told, there isn’t much in the way of this brand of light, faith-based comedy offered up by Hollywood.

While it doesn’t achieve the realism, sweetness, and triumph of Grace Unplugged, one of the best faith-based films of the last year of similar budget and scope, Moms’ Night Out fits a missing niche. Perhaps it’s right in the middle zone as a wholesome, yet contemporary comedy that passes the Bechdel test although there’s something apparently missing. Women, woefully under represented in Hollywood filmmaking, shouldn’t be excluded from Christian independent filmmaking either. Perhaps that is what’s absent here, in a film directed by the brothers Erwin, known for their over-the-top Christian abortion drama October Baby. They are talented technicians proving they can work successfully in two genres. Now they have to grow as filmmakers.

Moms’ Night Out is currently in wide release.