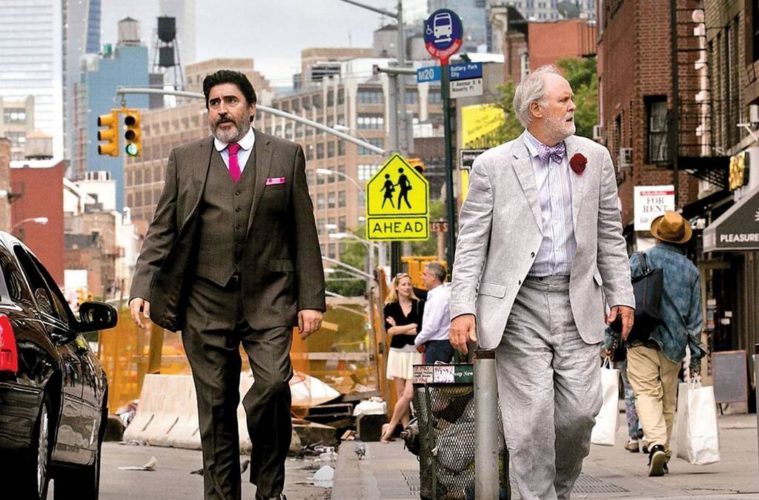 A timely New York story for any orientation, Love is Strange is Ira Sachs’ most accessible film, until its frustrating ending. Sachs, despite edging towards the mainstream, even pushing towards sitcom territory, pulls back and provides us, as usual, with no simple answer for its conclusion. If he had been working on this film within the studio system, an executive or test audience would have made him choose. Here, leaving the fate of a supporting character up in the air can either be a very smart, respectful decision or fodder for frustration.

Still, Sachs is mostly in control, telling the story of Ben (John Lithgow) and George (Alfred Molina) who have been in a relationship for 39 years. After the adoption of marriage equality in New York State they officially tie the knot in the film’s opening moments. Ben, a painter, and George live comfortably but unfortunately not in a rent-controlled apartment. After George is fired upon marriage from his position as a Catholic school music teacher they find themselves facing eviction. The film proves to be a successful slice of life. Set in Chelsea and the West Village, these early settlers find themselves, like independent film, priced out of Manhattan. Fortunately they have great friends who come to the rescue and both Ben and George are forced to split up. George crashes on the couch of their downstairs neighbors, two gay NYPD officers, Roberto (Manny Perez) and Ted (Cheyenne Jackson), while Ben, faced with Poughkeepsie or a bunk bed, chooses the latter. Moving in with a nephew he helped raise, Elliot (Darren Burrows), and his work-at-home writer wife Kate (Marisa Tomei), he embodies the old phrase made popular in Whit Stillman’s Barcelona: “Guests, like fish, start to stink on the third day.” In close quarters no one can focus on their work, including Ben (Charlie Tahan), his hosts’s son, and Ben’s new bunkmate. Ben, as it turns out, spends an awful lot of time with his new best friend Vlad (Eric Tabach) whom Ben later paints.

All and all, Love is Strange sets up sitcom possibilities and ultimately escapes them with observant humor and insight. As a New York film its set precisely in the present day as gentrification has continued to play out. Those that have caught up are simply one financial crisis away from having to move to Poughkeepsie. Refreshingly realistic and honest, it’s insightful about the economic decisions surrounding the complexity of remaining in Manhattan where the middle class is defined much differently than it is anywhere else in the US. One of the most interesting scenes early on, once the decision to sell their apartment is made, is when George and Ben investigate their options via a counselor for subsidized housing, another complex process.

Well-acted and directed despite what may be ambiguity for the sake of ambiguity, Love is Strange is a rare thing of beauty: a New York City drama infused with the wit about the shrinking middle class, made by a New York City filmmaker. Honest in its portrait of men in a loving, yet not always monogamous relationship, Sachs has in large part carefully crafted a drama that’s intimate without overstaying its welcome. In other words, it just avoids Ben’s observation, “When you live with people you get to know them better than you would like them to know.”

Love is Strange opens on August 22nd. See the theatrical trailer above.