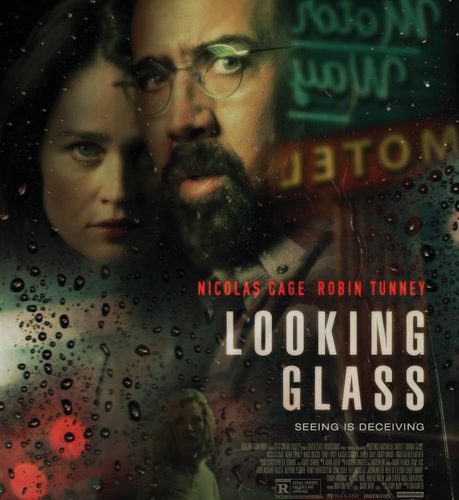 I can’t stop going back to an old Variety report from 2016 that contained a Braxton Pope quote about producing Looking Glass as what was then to be music video director Dori Oskowitz’s feature length debut. He spoke about how excited he was to partner with the artist in bringing a “remarkable story of voyeurism and grief to the screen.” I read that statement and wonder where it all could have gone wrong since the finished piece now directed by Tim Hunter from a script solely credited to Jerry Rapp (Matthew Wilder was also involved at one point) fails to fulfill its promise. Voyeurism and grief are both included, but neither is meaningful in the context of what proves little more than a generic thriller built from confusion.

Grief arrives with the tragic off-screen death of Ray (Nicolas Cage) and Maggie’s (Robin Tunney) young daughter. We see glimpses of the psychological turmoil wrought during the opening credit desert driving sequence to a motel the couple has purchased in order to dive head-first into a much-needed change of scenery. Does it mean more than an excuse for artsy memories via disjointed, wordless flashback? No. The two seem happy enough. She wants to sleep and he wants to drive. Her use of medication and his chugging of a beer to do so allude to forthcoming revelations, but it all seems “normal” now. I completely forgot about the daughter until she’s mentioned again to manufacture drama that simply doesn’t exist. Grief is a ploy, not a state of being. Voyeurism is similarly used after discovering a two-way mirror in Room 10 of the motel. Maggie sees the room as a single king bed to sell so families can use their two bed accommodations, but Ray knows better upon finding the hidden tunnel entrance behind a basement shelf of pool supplies. He enters that rabbit hole to see where it leads and returns to satisfy an urge we don’t yet know exists. He watches a “regular” named Tommy (Ernie Lively) have fun with a female townie and goes back again after remembering Maggie moved the attractive blonde from Room 6 (Jacque Gray) to 10 that morning. Each instance fumbles sexuality with an obtrusive score, exposes Ray as a deviant, and asks questions that don’t need to be asked.

The movie on a whole does these three things every opportunity it gets. It sets up mystery by showing the man who sold the motel (Bill Bolender’s Bill) as a paranoid weirdo falling off the map as though he was going on the run. It introduces a laughable sense of over-the-top creepiness at a gas station across the street with a snooping owner (Barry Jay Minoff) and his trio of carny mechanics. We wonder about Tommy and his skittish confidence being a result of his infidelity or something much more sinister; become mildly intrigued by a second blonde (Kassia Conway) who seems to be involved in some sort of assumed underbelly of hedonism running rampant throughout this desert town; and realize Ray is nowhere near protagonist material. Hunter and Rapp do all this as though they’ve made a horror film. We begin to expect graphic violence on the horizon with a town of unsavory characters swarming around the newcomers that don’t know any better. And when a murder does occur (one that only the audience sees) without any motive whatsoever the same night as a bloody prank causing details of a previous murder to be shared, we ready for insanity either from a malicious hoard or the ever-questionable Ray himself. What we get instead is a laboriously circuitous series of days that do nothing but deflate any anticipation we might have conjured. An out-of-place cop named Howard (Marc Blucas) enters the fray, but his interactions with Ray become frustratingly dull in their lack of payoff.

While the execution of every weak excuse for a twist and turn is really the culprit behind Looking Glass‘ failure, I would be remiss to not point a finger at Cage too. Whether through his own fault or that of the director, Ray as a character is obtusely opaque. Besides one instance of heartfelt emotion earned after seeing a photo of his deceased daughter, he’s a hollow cypher of vice and annoyance. He blankly stares with what could be animosity at anyone who dares enter the lobby for a room. He smokes his cigarette while lecherously gazing upon cars and windows attached to people with sex on their brains. And he goes full Cage in instances where it’s not warranted while remaining strangely calm when it is. The point is surely so that we can’t quite guess what his role is in all this — maybe he’s killing people in his sleep for all we know — but his performance and the movie’s plot progression led me to not care one way or the other. It’s like he’s constantly being led by a string while Maggie drowns in the background. She’s the one who earns our empathy. She’s the one in true mourning trying to move on and forgive. Tunney is great in the role and yet everything she does is ultimately diminished because the film needs her to be a helpless victim for us to muster any belief in Ray as a heroic figure. Rather than write him as complex, the script renders her complexity one-note.

By the end we realize everyone has been intentionally warped into red herrings left to exist in their strangeness once the bigger picture disposes of them. They’re creeps without assumed ulterior motives, Ray is a piece of crap undeserving of remorse, and the lot distracts us from what’s a simple cover-up of a crime that the filmmakers don’t even tell us happened until halfway through. The ending has no choice but to be a letdown when it shows a subplot jammed in later proves to be the main conflict. We try to invest but can’t because it’s all smoke and mirrors meant to pad the runtime of what’s a throwaway episode of procedural television at best. And every distraction is infinitely more interesting than what’s actually going on.