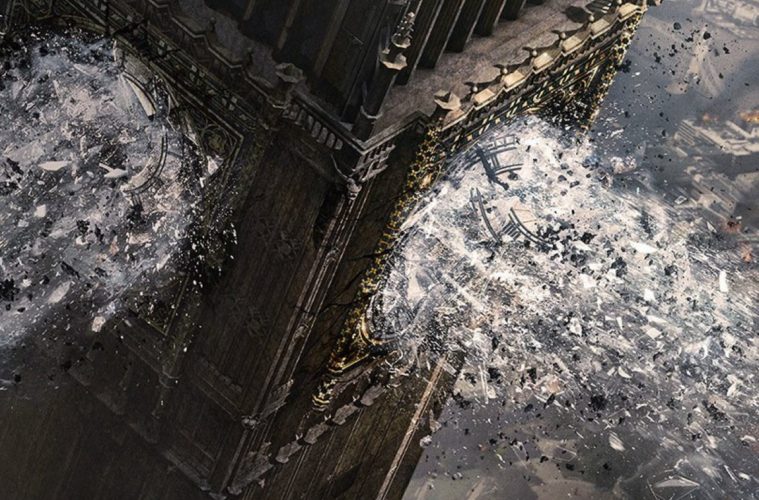 The most notable thing I can remember about Olympus Has Fallen is how it establishes that the White House windows have been primed to explode if anyone tries to break through them, but then utterly neglects to toss any bad guys through any windows. This is a capital offense for any action movie. Astonishingly, the new sequel, London Has Fallen, tries even less, and on every conceivable level. Its running time is shorter. The special effects are worse than I thought modern studio filmmaking allowed for. Actors such as Robert Forster and Melissa Leo reprise their roles from the first film with maybe half-a-dozen lines apiece. Were it not for the presence of said actors, this could easily pass for a DTV spin-off.

There are moments in which it appears fully possible that director Babak Najafi and the four credited screenwriters are in fact fucking with the audience. In establishing the situation in London as world leaders converge for the British Prime Minister’s funeral, the movie runs through a series of hilarious introductions for them, each a gleeful stereotype: the French president is purposefully running late, while the Italian PM is fooling around with his mistress on the roof of Westminster Abbey and is named Antoni Gusto. Is this a stealth parody flick? Is the facade of stony seriousness actually ironic? Is it winking at us when protagonist Mike Banning (Gerard Butler) delivers a jingoistic speech on how America will never fall as he beats up a racist terrorist stereotype? London Has Fallen is, unfortunately, too boring for me to care. Its lack of giving a shit sadly extends to the quality of its action.

As an army of terrorists emerge throughout London to bomb and / or shoot the world leaders, Banning, a Secret Service agent, is the only one who can protect US President Benjamin Asher (Aaron Eckhart). With the terrorists impersonating police officers and first responders, actual authorities are forced to withdraw, and the core of the city becomes a war zone. Not that it ever feels as such. Rather than delve into true urban chaos, the movie uses its premise as the impetus for a series of fights that mostly take place in hallways or narrow streets, which are essentially the hallways of outside. Presented via the classic method of “I’ve never handled blockbuster action before so let’s cut really quickly and hope it looks frantic enough,” each encounter is a bore that looks the same as any other, particularly once night descends and everything is direly underlit. Not that this is obscuring anything too exciting. As in the first film, Banning is an absolutely untouchable fighter. He’s the most tedious kind of superman — a void of personality with an atrocious American accent — and Butler lives for the few pithy laugh lines he’s given, some of which are reasonably funny.

London Has Fallen wants you to watch it and think of incidents like the Paris attacks. As in other politically-minded action pictures, it magnifies public anxiety over terrorism to a cartoonish degree, stoking the viewer’s fears even as characters declare that they will never succumb to fear. But this really looks nothing like Paris, or the actual attacks that have happened in London, or even 9/11. This movie turns London into Baghdad — or tries, but invents a depopulated, uninventive Call of Duty level instead — because it seems that what the West fears most is that what it’s done to Middle Eastern countries will be returned to it. The main villains are a Pakistani family motivated by a drone strike which targeted them while they were at a wedding. And yet drones are not monstrous, cowardly tools but instead godsends for the heroes, their constant surveillance allowing Banning to work and their disquieting hellfire ultimately the delivery of satisfying deific judgment upon the villains. Apparently drones are both the cause of and the solution to all of the world’s problems with brown people.

The mixture of escapist violence and humor with would-be-relevant topicality only gets stranger as we move deeper into the post-9/11 world, whatever terrible things that means. Oddly, London Has Fallen not only refrains from any cutesy “How can the same shit happen to the same guy twice?” references to the first film, but actually eschews any acknowledgment of the first film at all. When briefly seen, the White House looks no worse for wear after its ransacking three years past. One character ominously declares that the world is falling apart due to the lack of governmental vigilance, while another affirms the need for American interventionism abroad. An attack on the White House by North Korean terrorists somehow did not result in a worldwide police state, and the film’s message is that perhaps it should have. And people say Hollywood is too liberal.

London Has Fallen will open on Friday, March 4.