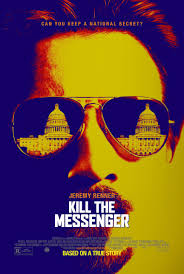 Following the leads, pushing for the truth, and refusing to back down are the qualities that distinguish the great news journalists from everyone else. In Michael Cuesta’s Kill the Messenger, they are also the attributes that seemingly crash the life of its protagonist. Jeremy Renner, in his strongest, most nuanced role to date, plays Gary Webb, a San Jose reporter who uncovers government dalliances with the crack/cocaine trade and finds himself reduced from heroic, crusading underdog to vilified, conniving alarmist once his story breaks. Webb’s story is fascinating; sometimes infuriating, sometimes suspicious, ultimately tragic, but the movie itself lacks the kind of conviction and dogged insistence its subject seemingly embodies.

In the mid 90’s, Webb was a journalist for the Mercury News, eagerly pursuing stories involving drug dealers getting hit by government crackdown. One day he’s handed the proverbial career maker in the form of a vindictive dealer’s girlfriend (Paz Vega), who delivers incriminating files that suggest a link between Nicaraguan cocaine scheming and the funding of the CIA’s Contras. When Webb goes to Central America to interview a jailed drug lord, the man (Andy Garcia) talks about meetings with Oliver North, and Webb is both righteously incensed and journalistically elated; this is the big one.

In the ebbed wake of the Reagan era, amidst the crack cocaine fall-out of the 80’s and 90’s, Webb’s investigation gains a beguiling insistency; if he can prove this, he’s got a compelling government conspiracy that took a big bite out of American welfare for its own self interest. Despite the warnings—some sincere and some veiled threats—Webb stands behind his story, and the Mercury News runs his ‘Dark Alliance’ series, exposing elements of the government as less than protective and briefly shattering the illusion of the status quo. Predictably, those forces come back with a vengeance, but Messenger retains the essence of its true story; Webb isn’t destroyed by shadowy operatives racing to silence him, but by the very society of which he was a member, seemingly because he’s pushed too far into a minefield few want to wade into. It’s the media titans of the day—the Washington Post and The New York Times—as well as Webb’s own personal fault lines that help discredit his work, disgrace him as a journalist and leave him spinning in a free-fall that tragically lead to his death. Cuesta and his screenwriter Peter Landesman, aided by Nick Schou’s source material, cut through a lot of the residual noise and lingering after taste of Webb’s story and find a strong, sturdy through-line that they explore with a slow-burning dedication.

The production and direction are both meticulous and visually enlightening; a story involving interviews, trudging through news-rooms, and checking tape-recorders hasn’t been this nail-biting since the 1970’s. Webb’s original articles were provoking, and in its best moments, so is Messenger, particularly when it’s prying behind the motivations and values of a man who gambled with being a hero, and ended up taking the fall himself.

It would be all too easy for Messenger to develop into a soggy soap-box thriller, but the acting never allows that to happen, even as some of the more nuanced elements slip into a familiar and overly-simplistic structure. The performances are the main showcase here, with accomplished and juicy small turns by the likes of Mary Elizabeth Winsted, Tim Blake Nelson, Barry Pepper and Michael Sheen bolstering Renner’s fantastic Webb. Rosemarie DeWitt as Webb’s long-suffering wife is a revelation, offering a finely calibrated performance that holds some striking emotional notes in a song we figure we’ve heard many times before.

Cuesta starts strong, gets caught in a thick mire of convenience and cliché, and is lead through the fog by his lead actor who brings the films strongest themes out into the light. By making Webb into something more startling human than a martyr or unsung hero, Renner takes his craft to the next level and challenges the audience to question the truth in the same way the man he’s playing asked the same via his work. That intensity and introspection—growing more ferocious and wrenching as Webb embarks upon his professional and personal descent—is what really defines Kill the Messenger. When the writers and director play it safe, Renner steps up and saves the movie.

This may not quite be All The President’s Men, but as a curious, questioning look beyond the veneer of our cultural smokescreen and a paean to a world of journalistic exploration that’s been lost amidst the white noise of media saturation, Messenger delivers warnings worth listening to. The film doesn’t demand that you now respect Webb or sing his praises, but it does ask you to look at the cracks in that tranquil façade, and to keep looking, no matter how much it seems to fracture.

Kill the Messenger is now playing in wide release.