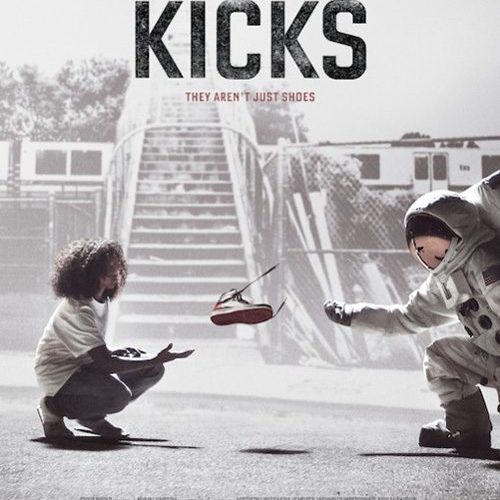 The film industry is still a long way from racial equity, but the last few years have seen strides to bring the young black experience to the screen in films like Dope, Dear White People and Morris From America. All of those films were important in distilling a specific existence, but they all offered black characters who self-identified as outcasts.

Justin Tipping’s debut, Kicks, follows another societal reject, Brandon, a socially awkward black 15-year old living in Richmond, California, but while Brandon feels uncomfortable in his own skin, the script doesn’t demonize the culture he’s come from. Brandon has grown up in a place that idolizes a legacy of gangsters, but there’s just as much an understanding that expressing masculinity is about actively posturing. As a figure, Brandon naturally recedes into the background, easily overshadowed by his blooming hair, and paling in comparison to his best friends, Albert (Christopher Jordan Wallace) and Rico (Christopher Meyer). Feeling overwhelmed by his smallness, Brandon decides to buy a pair of Air Jordans – an item that’s nearly totemic to the people in his circle. Immediately, there’s a difference. He has an easier way with words, and he just generally feels happier.

But Brandon lives in a neighborhood where a stroll down the wrong avenue can get you mugged by Flaco (Kofi Siriboe) and his gang, who seem to make a living out of jumping young teens for their shit. Everyone around Brandon tells him to forget about the shoes after he’s beaten to a pulp and robbed, but this isn’t just a matter of money.  It’s a matter of pride, and he’s going on an ill-conceived adventure to get them back.

This is all punctuated by a prominent usage of hip-hop whether through interludes that pair Brian Reitzell’s airy score with whispered bars from legendary songs like Party and Bullshit and C.R.E.A.M., or the soundtrack which includes hyphy standbys like Mac Dre or Iamsu! In a year of astonishingly lazy musical cues, Kicks has some of the best needle drops of the year – especially a use of “In You (I Found A Love)” that encapsulates the confidence crisis of Brandon.

Then again, the film’s reliance on music as the glue does make the narrative’s odd pacing all the more transparent. During Brandon’s journey, Tipping cuts intermittently between Brandon and his friends and Flaco at his own home, but these scenes don’t feel organic. It certainly fleshes out Flaco’s character as we see him playing with his young son, and also being a terrible father – one of the most disturbing scenes comes when Flaco is getting a lapdance while his young son is playing with toy cars on the other side of the room – but these scenes feel oddly disjointed.

Tipping may not have the vision for the whole picture yet, but he has a knack for moments. One of the best scenes just involves Brandon and a huge group watching cars doing donuts. To the sounds of Bay Area anthem,”Get Stupid,” the camera first just frames the drifting in slow motion until it moves to bring Brandon into the frame, and snaps right back into the story with a freak accident. Tipping unfortunately isn’t always this subtle with his imagery – a main visual motif of an astronaut is groan-worthy in its obviousness – but there’s still a powerful punch to imagery like a handgun that’s placed only a few feet away from a child, or the bongs that are strewn right next to kid’s toys.

It’s not just the imagery, but the sense of experience that comes through in the dialogue with characters like Marlon (the reliably fantastic Mahershala Ali), Brandon’s cousin who avoids the clichés of the wizened mentor by treating Brandon as more of a familial obligation than a pupil. He’s a character who, with a few short lines, is able to dramatically expand the scope of these people. While Brandon sees Flaco as a villain like Magneto, he’s nothing but an uppity punk to Marlon. The food chain is long and complicated, and Kicks is constantly reminding its own characters of each person’s humanity.

Characteristic of a debut, Kicks doesn’t always work. The story’s a little rough, its philosophies are muddled, and it over-relies on literal interpretations of character’s feelings. But Tipping is a fresh voice who has already established a great sense of atmosphere, and more importantly, he’s shown that he can tell stories about a more stereotypically black experience with nuance.

Kicks is now in limited release and expanding.