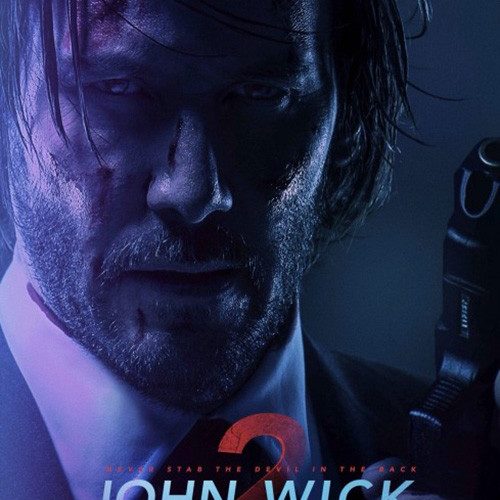 John Wick‘s box-office score made inevitable another go-round with the seemingly undefeatable assassin whose soft spot for muscle cars and puppy dogs led to a whole lot of trouble, in turn making inevitable the fear (at least for yours truly) of diminishing returns. Is there any way one of this century’s leaner, finer American action movies wouldn’t be given the bigger-is-better treatment? Probably not. What about the kick-ass picture really needed an adding-to? Whatever its flaws, John Wick hit where it counts — a place where improvement is possible, certainly, if not so necessary when running the risk that a good time be diminished with weak imitation. Now that a sequel is upon us, you may ask: is it a step towards something better?

The answer is a bit of yes and no both, and that, I’m happy to report, is just fine. Closer to an expansion of its predecessor than a true follow-up all its own, John Wick: Chapter 2 offers a fair share of what already worked while ironing out a few rough spots. Which isn’t to say the formula’s been perfected just yet. The basic set-up might hint at this: some unfinished business from John Wick’s last crusade rears its head in an explosive, fiery way. Before you ask, worry not: his new dog makes it through all right, as revealed in one of this movie’s simpler and, tellingly, more clever images, a quiet subversion of where you think things are headed. The reluctant killer now finds himself carrying out an assassination plot, caught in a double-cross, the subject of a big-game bounty hunt, and some other scenarios that, who are we kidding, are the threads stringing us from one action sequence to another and one killing to the next. So, so many killings.

What fun! But Chapter 2‘s biggest flaw is thinking it’s good enough on a standard writing and directing front to stage a build-up no less compelling than its clip-clearing, body-slamming, bone-breaking other half. That was somewhat the case last time, though directors David Leitch and Chad Stahelski had in their back pockets a mix of visual exactitude and, per scribe Derek Kolstad, taste for world-building that was so pleasurable because it was both intriguing (who even expected all that business with coins and assassin guilds in the first place?) and unobtrusive. John Wick rested at the never-before-known sweet spot between Bresson and Bioshock. Chapter 2 finds Stahelski flying solo (Leitch returns as executive producer) with a new cinematographer (Dan Laustsen) and editor (Evan Schiff), and Kolstad’s second trip with the character more often reminds one of a Bond picture in its way of turning what’s old into something new, except, of course, not really. With that said, the non-action visual strategies are too generic and quick-minded (how many variations are there in a single shot-reverse conversation?) to keep the piece-setting as engaging as it should be.

These early strides don’t lack for merit. Though Keanu Reeves‘ turn reveals no greater dimensions of Wick’s personality (a tired assassin is a tired assassin), it’s hard to watch him do so much as pour a cup of coffee and fail to appreciate this as a role tailored for the man’s particular talents — presuming you, too, think the sadness underlying his screen presence, those pauses and intonations and glances that barely ever rise above a whisper, are subject for further study. But you’re here for more than coffee-making, and Chapter 2 delivers right in an opening sequence whose brutality, scale, and length would almost be more at place in a climactic encounter. Bit parts are afforded to actors obviously enjoying themselves greatly (Peter Serafinowicz as a gun dealer; Franco Nero as manager of the assassin hotel’s Rome branch; Peter Stormare doing Stormare to the nth degree), their uniformly comedic vibe contributing neatly to proceedings that play best when dropping attempted profundity — this movie’s “grand images” are more like dramatic shots from a video-game cut scene — for a style that’s precise, and precise in a kind of knockaround, loosey-goosey manner.

I found that tone a good lens through which to view Chapter 2‘s action, never more so than when the movie begins with a projection — literal? imagined? either way, on whose part? — of Buster Keaton stunts on the side of a Manhattan building. (I could say this makes more sense once you see it, but it very likely won’t.) The level of violence throughout should pretty explicitly undercut the silent star’s missed-by-that-little tone, yet you tend to remember those more than his getting dinged about in one film after another, and Wick’s constant brutalization has something or another of that daring edge to it, seemingly zero risk of lasting pain be damned. There are more deaths and maimings than is almost possible to keep track of (look for that supercut in a few months’ time), the repetitiveness of which I found had some continual and comic way of addressing how an anonymous henchman might fare against John Wick. You’ll be greeted with a response again — then again, then again, then again — and I can’t say the sight and sound didn’t continue to satisfy.

Actual innovations are minor, albeit appreciated. How much power the outstanding sound design can wring from rock music that’s blended into the oh-so-loud revving of an engine; how genuine the surprise when, just as it seems the movie’s advancing neatly towards its climax, a set of small-scale fights with anonymous hitmen turn out to be temporally scrambled and, in this way, concerned with the purer pleasures of technically assured action filmmaking than absolute coherence. It’s here where Stahelski et al. seem to find the images they want, even if their effect partly underlines the banality of surrounding compositions. I nevertheless find myself roused by an exchange of silenced gunshots in a public setting, and especially so by a wonderfully photographed and edited climax set inside a hall of mirrors. I don’t care what, if anything, is to be gleaned from the setting’s art-gallery title; I’m glad to see action cinema that favors visual confusion and succeeds wholesale. That and a few counterparts could be watched in iterations twice their actual length, and the enterprise at large would’ve only benefited had its complementary dramaturgy been whittled down to the absolute basics.

Whether or not John Wick: Chapter 2 is superior to its counterpart matters little when the experience is worth enjoying unto itself; perhaps my biggest compliment is that the film would’ve had a similar effect as its predecessor had it come first. A bit more visual patience and screenwriting precision would do us well in a third part, which is almost guaranteed by an all-or-nothing finale that hints at the biggest, bloodiest installment yet. Yours truly is fully prepared, and mostly counts himself lucky that the creative talent are clearly pining for more.