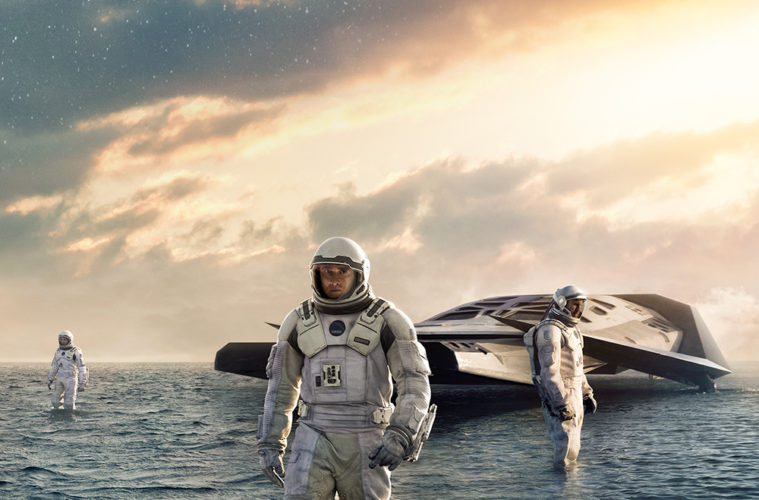 Let’s not critique Christopher Nolan for his constant exposition. Nolan, perhaps the best-known quantity in Hollywood filmmaking of the last decade, has been continually lambasted for the tawdry dialogue delivered via his characters. But his characters are in situations that require it, whether we’re talking about the rule-bound dreamscape of Inception or amnesiac Leonard’s retelling of his condition in Memento. In his latest opus, the existential science fiction epic Interstellar, a NASA crew needs to relay a lot about quantum physics, black holes, and the relationship between gravity and time. So why do more “heady” themes, like family, survival, and love, have to be discussed like a teenager reading an anatomy textbook?

Interstellar follows Matthew McConaughey on a galaxy-hopping quest to save the human race after an ambiguous apocalyptic scenario has left much of Earth desolated and the few survivors waiting out in a monotonously peaceful, yet doomed, society. For McConaughey’s Cooper, the mission becomes personal on two fronts: live the dream of adventure his society never gave him, and ensure his daughter’s survival, even if she seems utterly contemptuous about the departure. (Since Einstein’s theory of relativity comes into play, it’s going to be a long time.) Interstellar, which was originally a Steven Spielberg project (some of his markers, notably the ’70s-style farmhouse, remain), has an emotional core that recalls Spielberg’s critique of his own film, Close Encounters of the Third Kind: Richard Dreyfuss should have never left his family. Let’s not critique Christopher Nolan for his handling of actors. Nolan’s clout has allowed him to draw some of the most talented stars that Hollywood can offer, though his predilections squander them into what seem like thankless roles. These are performers trapped in monotonous conversations with each other, about as excited to be reciting these lines as if taking an oral SAT exam. But so did Kubrick with his cast in 2001, a film that Interstellar endlessly quotes — and justifiably so, as both films are obsessed with the mechanics of space travel. Certainly hearing exposition about the fifth dimension is probably more fun when there’s Anne Hathaway as McConaughey’s travel partner, Michael Caine playing his usual role of old mentor, Jessica Chastain and Matt Damon taking parts best left for discovery, and Bill Irwin as the voice of a rectangle-shaped robot with a sense of humor. You can fill in your own joke about a steel block being the most human thing in a Nolan movie.

Nolan uses these actors because they bring the human dimension that he can’t figure out with his own camera — tearing away what is utterly elemental to Spielberg and Kubrick, replacing it with easy access points of identification. But it’s not clear enough why Nolan chooses these specific actors. Christian Bale’s gurgling voice and misanthropic presence felt less and less necessary with each step of the Batman franchise, and it’s perhaps no accident that Leonardo DiCaprio abandoned bland, internalized intensity for a page out of a comic strip in Django Unchained and The Wolf of Wall Street. What has made McConaughey such a welcoming and ubiquitous presence as of late is not what Nolan pulls out of the actor; his magnetism is too internalized here, his mind too one-tracked toward the plot-oriented material. He just kind of sits there, and not even with a Spielbergian face of awe as he stares toward the cosmos. There might also be the problem that a lot of the acting in Interstellar asks its men and women to scream in sitting positions while different light fixtures cross their faces.

Let’s not critique Christopher Nolan for his obsession with realism. It’s easy to lambast Nolan for trying to think of a superhero film in terms of a gritty crime thriller, deconstructing magic into science, and turning dreams into very literal planes of space. Interstellar follows suit here, where space travel is bonded with an utter reverence to scientific fact, making Gravity look like Armageddon in terms of accuracy. Forgoing the obvious critique of who goes to movies for fidelity to reality, Nolan has deliberately made space seem, for lack of a better word, boring. Yet the desolately indistinct planets visited by his very un-rowdy crew are chiefly designed for driving Cooper’s desire to return home to his daughter. It’s notable that the film’s most luscious images, made palpable for once thanks to DP Wally Pfister’s replacement Hoyte Van Hoytema (Her, Let The Right One In), is the Earth-bound farm house, what with the special glows of yellow along with the playful use of dust throughout these scenes — perhaps the reason to shoot on film stock as opposed to a digital equivalent. That Nolan otherwise imagines space without much perspective beyond accuracy leaves everything kind of cold, despite the pounding of Hans Zimmer’s score insisting on some sort of transcendence. (Keep hitting that last pipe organ note of “Thus Spoke Zarathustra”; I’m sure the next one will convince me.) However, the bluntly logical nature of Nolan’s filmmaking gets at least one surefire action beat — a rotating spaceship docking in speedy situation, in which the necessary step-by-step process actually requires that intense logic to make it exciting.

Let’s not critique Christopher Nolan for the “style” he’s developed. There’s certainly been an improvement to some level of competence over the years, and here he chooses longer shots that accurately set up spaces, correcting a big failing of his early career. Occasionally, Interstellar shows him genuinely framing his actors in a scene, notably the moment Cooper drives away from that farm house and is neatly spaced between those he leaves behind. Too often, however, the near-anonymity of Nolan’s functional compositions and expressionless palettes has blunted the impact of his formalism. Why is Nolan so afraid of subjectivity in a film that’s about a man confronting his own emotions against any objective logic? Even the film’s chance for a dazzlingly climatic set piece turns out to be so utterly logical. He also remains incapable of shooting the most simple action scene: the moment in which a spaceship lands on an ocean carefully avoids any shots that would give us the logic of the space (in order to seemingly heighten the visceral impact), thus only adding to our confusion.

Let’s not critique Christopher Nolan for his self-serious attitude. Through each film, he seems to be pursuing more ambitious themes with greater weight, expanding to bigger dimensions each time — but each also boils down to a central, blink-and-you’ll-have-a-hundred-more-chances-to-hear-about-it idea. There’s nothing wrong with the naïve faith in human hope that Nolan places at the center of Interstellar — it’s what made a director like Delmer Daves one of the greats of classical Hollywood. But while Daves turned goodness into the most complex of emotions, Nolan’s idea of “love” is utterly abstract in a film otherwise filled with literalness.

There’s nothing wrong with Nolan’s ambition toward the philosophical, and certainly to make Interstellar into a three-hour chamber drama with no conventional action requires a certain amount of chutzpah. But Nolan’s films, both in terms of narrative and theme, always turn out to be so tidy. There are no questions left at the end of Interstellar. The film carefully guides you through its neatly packaged square of the universe, never leaving open a possibility of the beyond — not necessarily something darker, but something that would require his audiences to make a leap of faith.

If anything, let’s critique Christopher Nolan for his use of the medium itself. When the essential property of film forces us to believe in an illusion, he’s become the least-spiritual director in contemporary cinema.