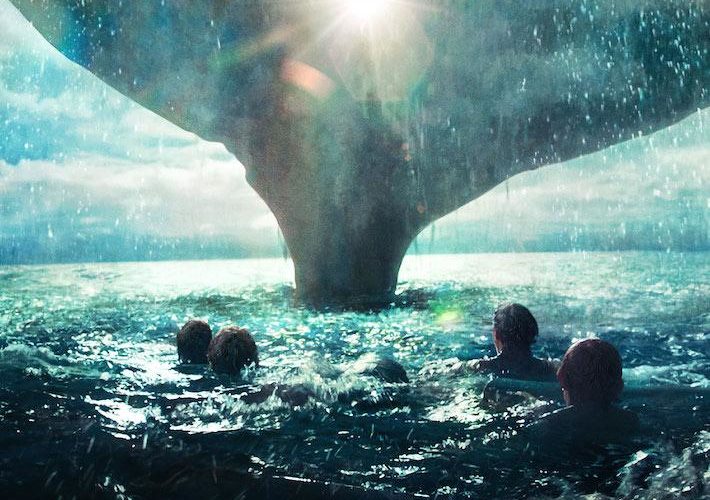 [Review] In the Heart of the Sea

The history of Hollywood’s distortion of and digression from the facts of supposed ‘true stories’ is long and infamous. Any movie that claims to be “based on a true story” can be assumed to be little more than a fantastical recreation of a one-line description of a thing that might have happened. In essence, films based on real stories are the most expensive version of the “I caught a fish this big” exaggeration possible. So if In the Heart of the Sea, the newest film from Ron Howard, makes some serious changes to the story of the Nantucket whaling ship Essex, it can be forgiven.

Less easy to forgive, however, are the egregious storytelling missteps and the shaky application of garish CGI that hobble what should otherwise be a crackling, harrowing story of adventure and survival at sea.

The most embarrassingly misjudged aspect of this film is the framing device in which Herman Melville (Ben Whishaw) visits and interviews an aging Thomas Nickerson (Brendan Gleeson) about the sinking of the Essex, which is officially blamed on it having run aground. Melville, in this telling, has heard rumblings that the ship was actually sunk by a giant white whale and pushes Nickerson to break thirty years of silence to tell the true story. Aside from pointlessly attempting to add a sense of literary and historical intrigue to a tale already dripping in poetic irony and epic stakes, this framing device only serves to pull the audience out of the film through constant interruptions to the actual story.

Not that it is so easy to engage with the story as it is told here anyway. Eschewing the actual social and economic intricacies of the whaling trade, screenwriter Chris Leavitt instead builds a hoary drama regarding two men, one a seasoned veteran and the other a foppish novice, while sometimes blunting comparing whaling to oil drilling. The two men whose clumsy juxtaposition is supposed to give us our human conflict are veteran whaleman Owen Chase (Chris Hemsworth) and inexperienced captain George Pollard (Benjamin Walker). Chase is the son of an off-island farmer denied his appointment to captain to allow the Nantucket-born Pollard to take the reins to fulfill his birthright.

The difference between the two men is so nakedly and cartoonishly illustrated that it becomes impossible to invest in them as human characters, and yet the two of them suck up any screen time that could go to a more interesting character. This is especially true of the young Nickerson (Tom Holland), a cabin boy on the ship at the time, who, in spite of being our ostensible narrator, does scarcely anything of note. The elder Nickerson, meanwhile, continues to narrate from both on and off screen, providing context that we do not see and adding emotional shading that is never acted out in the film itself.

All of this could be forgiven if the story delivers in the nautical action promised by the story, and yet even here the movie founders in its endeavors. Much of the film is shot by Anthony Dod Mantle in tight close-ups, shakily following grimacing faces while the might ocean or mighty quarry of the whalers tosses them around. The scenes on the high sea are often covered in a green-gold filter that makes them look like patinated plaque commemorating some oceanic tragedy in a seaside town, but the aesthetic is pointless in its artifice and only serves to draw attention to the sometimes-impressive, but more often than not, disappointingly obvious CGI of the whales and ocean itself. Rare is the shot in which the men and their prey interact in a believable way.

From the point of the sinking of the Essex onward, it makes every attempt to undercut and blunt its own story of survival on the high sea. Titles let us know how long the men have been at sea, but the demeanor of the men and the editing and pacing of this act makes it impossible to feel their sense of loss and abandonment. Their desperation comes out of nowhere, and the fact that it begins from the moment the Essex sinks means that the encroaching sense of doom and hunger among them lacks any tension or build-up. Meanwhile the framing device takes pains to destroy any interest one might have in the way these men had to survive. Pained by the lengths they had to go to in order to live, elder Nickerson asks Melville if his wife could ever love him if she knew what he had done, and the moment – pointlessly expository as it is already – is further robbed of any meaning by having her immediately enter the frame to absolve him. The movie actively pushes the audience away from having to engage with the question of how far one would go to survive and whether or not they could live with that choice, and swiftly moves on from there.

Every bit of the film is like this, and as it goes on more even the tinier issues begin to grate. You notice how wasted Cillian Murphy is. You wonder what meaning Howard hoped to wring from his numerous insert shots of random items filmed in tight close-up with a shallow depth of field.

Finally, you wonder why anyone involved felt the need to make this film. The story of the sinking of the Essex is one of the forgotten bits of American history that can easily be made to stand in for all kinds of ideas regarding American exceptionalism, hubris, and industriousness, among many other ideas. To turn it into a proto-prequel to the creation of Moby-Dick demonstrates a fundamental misunderstanding of the core draw of the story, and to weakly slap on some sort of crude oil analogy at the end only further evinces that ignorance.

Lacking in base thrills, devoid of human drama, and frustratingly crafted to wash away any inherent interest that might somehow have slipped through unmolested, In the Heart of the Sea stands as one of the greatest squandered opportunities in film this year. A bafflingly, hard-won disappointment.

In the Heart of the Sea opens nationwide on Friday, December 11th.