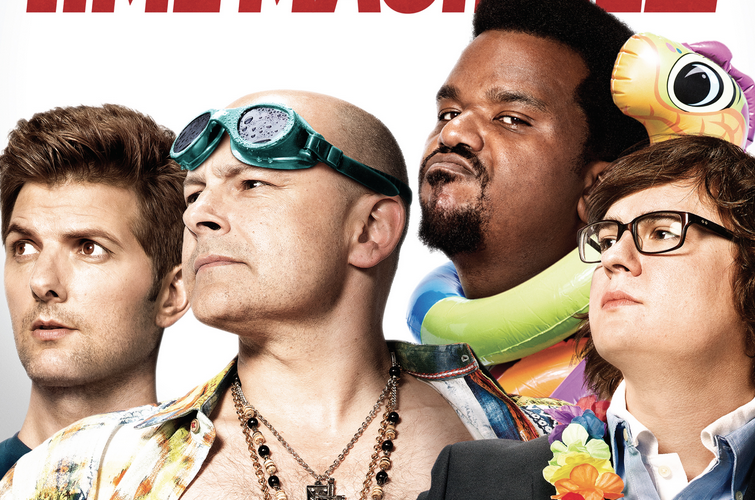 As far as absurdly dumb, high-concept comedies go, 2010’s Hot Tub Time Machine mostly hit its mark, riffing on everything 80’s while cramming in as many crude (and mostly funny) one-note jokes as possible. Returning five years later for the sequel that one can’t imagined many asked for is director Steve Pink, the writing trio of Josh Heald, Sean Anders, and John Morris, and most of the cast, including Rob Corddry, Clark Duke, and Craig Robinson. John Cusack, however, must have used his time-travel powers to wisely foresee sitting out this stale journey into the future.

Continuing from their last adventure, the contemptible Lou (Corddry) has now worked his way up from ripping off Mötley Crüe to creating a Google-esque media empire called Lougle thanks to his knowledge of the future. Dealing with relationship struggles, Nick (Robinson) has profited from getting the jump on musicians like Lisa Loeb, Hanson, and Nirvana and releasing his take on their hits before they’ve even conjured them. Meanwhile, Jacob (Duke, a highlight here) is having major father issues as he’s been relegated to a butler position in their home, thanks to his egomaniacal father, who is running his tech company into the ground. During one of Lou’s parties, after an inane speech given to the crowd, his genitals get blown off by a shotgun (with an infuriated employee pegged as the offender) and so the trio decide to jump into their trusty hot tub time machine to find the assailant and save Lou’s life. Instead of a repeat trip to the past, the sequel takes a note from the Back to the Future franchise and they unknowingly jump to 2025. From the start, it’s clear that Pink and company have a far cry less than the $36 million budget from the original to work with on the follow-up. With a relatively cheap aesthetic from top to bottom and the crutch of ADR (including one bafflingly poor execution of a line), there’s a rushed, unfinished sense to the whole matter, which unfortunately carries through to the most important part of a comedy: the humor.

The most promising addition to this follow-up, Adam Scott, aptly playing Adam, the son of Cusack’s character, links up with our main trio but is sadly underutilized, as is Gillian Jacobs, taking the minor role of his soon-to-be-wife. The mannerly Adam, sporting a “futuristic” skirt as a next-level hipster, is given one final crazy night before his wedding, resulting in a Hangover-esque subplot leading to a more damaging outcome. The comedic actor still manages to garner the most laughs, requesting room-temperature almond milk from a bar before soon entering into a hallucinogenic freak-out like few others we’ve seen on screen.

Dealing with father issues, sobriety, and commitment, Hot Tub Time Machine 2 feels the need to try and astutely explore these themes, but perhaps it should have worked harder in giving us a reason to care about its characters, or simply laugh at them. Even if a comedy is filled with mean-spirited people doing despicable things as this one is, it’s easier to go down if one is having a good time. Instead, Hot Tub Time Machine 2 is barely a passable one, including a few chuckles here and there, but with the misguided mentality of quantity over quality.