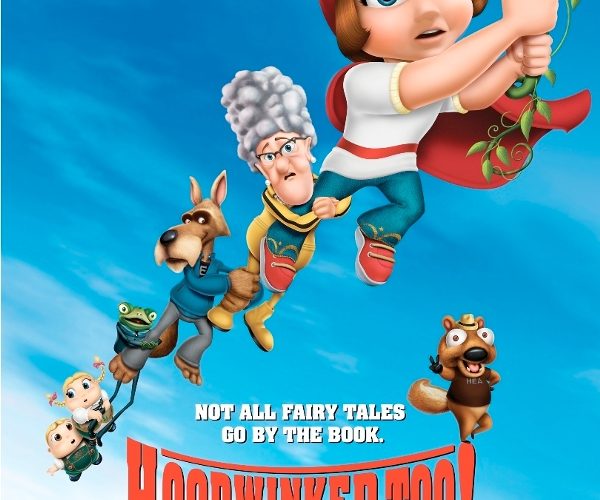 [Review] Hoodwinked Too! Hood Vs. Evil Hoodwinked Too: Hood Vs. Evil is a cute animated comedy that strives to delight children and amuse adults with its cheeky take on fractured fairy tales, liberally peppered with pop culture references. It’s an enthusiastic effort that will be fun for kids and bearable for their parents.

Like the first film, Hoodwinked Too is a genre-blender, mixing crime-thriller conventions with a healthy dose of slapstick and a cadre of colorful re-imaginings of fairy tale folk to craft a kooky confection. This time ’round, the plot revolves around an actual confection: a decadent dessert so devilish that it turns any who eat it invincible. Chasing down a red-eyed witch bent on world domination is gutsy heroine Red Riding Hood (voiced by the fittingly spunky Hayden Panettiere), her impulsive partner the Big Bad Wolf (voiced the always enjoyable Patrick Warburton) whose reputation is worse than warranted, her spry and sassy Granny (Glenn Close), and a dementedly hyperactive squirrel. When Granny is kidnapped along with a pair of chubby troublemakers (Bill Hader and Amy Poehler as the delightfully duplicitous Hansel & Gretel), Red and Wolf are forced to set aside their differences to save the cheerleader grandma, and save the world. It’s a typical buddy cop convention that feels admittedly stale, but Red’s moxie results in some fun action sequences, while Wolf’s hackneyed disguises garner guffaws. And aside for a clunky third act, it moves at a jaunty pace and features some cool girl-power action and plenty of kid-friendly laughs. However, there’s little here for those of us who no longer fear cooties. To their credit, the filmmakers aim to appeal to adults with some celeb stunt casting and a plethora of pop culture references. Tommy Chong and Cheech Marin play some catchphrase-spouting “hench pigs.” Heidi Klum has a cameo as a plump parody of her Project Runway persona, and (as mentioned) Hader and Poehler score laughs as wordy and wicked wunderkinds. But the writers overstuff the script with lazy allusions, awkwardly referencing a barrage of films including Silence of the Lambs, Star Wars, Kill Bill, Scarface, The Terminator 2, Entrapment and Deliverance. Combine this with low-rent animation that is more suitable to Saturday morning television than the big screen and its equally mediocre soundtrack (which includes an eager and eponymous rap tune) Hoodwinked Too ultimately feels like the poor man’s Shrek. Even it’s 3D status fails to add dimension.

Still, it’s got a charming moral and will please its key demographic with its whimsical yet edgy tale of friendship and self-assurance. But with so many filmmakers broadening the reach of animation, and crafting deeply engaging and sharply comedic animated films, this sequel is essentially enjoyable but ultimately forgettable.