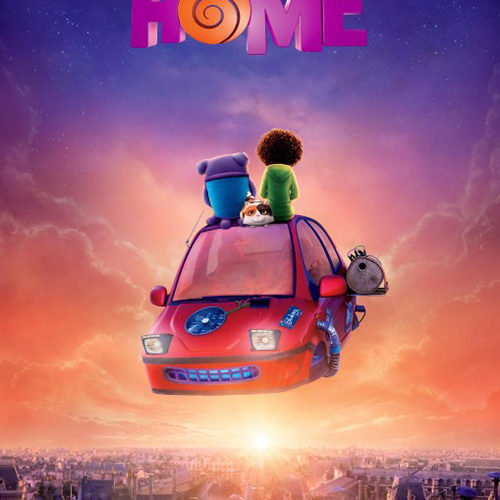 Alien invasion gets a strangely cheerful overwrite in Tim Johnson’s Home, the latest (and only) entry from DreamWorks Animation this year. The studio, that took a financial beating last year due to Peabody and Sherman and Penguins of Madagascar, has its hopes pinned on this slight extraterrestrial buddy comedy that finds a young girl partnering with an expectedly cuddly intergalactic pal so they can go on a milquetoast adventure and discover the meaning of friendship. The ominous wrinkle here is that the little alien, Oh, is an outcast from his people because he’s inadvertently brought their sworn enemy The Gorg down upon their heads, and his people, The Boov, are the ones who have stolen the little girl’s mother, part of an upbeat takeover of Earth that abducts and relocates all humans to Australia. It’s a little like Flight of the Navigator meets War of the Worlds, if the Martians were less homicidal and looked like those marshmallows you find in kid’s cereal.

DreamWorks has been all over the map in regards to the quality and tone of their animated features, and although surprises like How to Train Your Dragon or Kung-Fu Panda have kept the studio from feeling completely like a second-hand Pixar clone, many of its features lack for creative storytelling and original character design. Based off the novel The True Meaning of Smek Day by Adam Rex, Home takes an actual science-fiction story, admittedly toned down and geared towards the younger set, and grinds it up and blends it down into another homogenized family product. The film is gorgeously animated, but in a routine fashion; it’s colorful and full of energy, yet at one single, manic level; it earns a degree of emotional resonance, but only after squandering a large amount of its plot and running time. For every individual element the film and its creators get right, there are three or four that simply slide by and render the final product a mostly forgettable and familiar thing, half-heartedly remembered when you’re flipping by it on cable.

Director Johnson, who helmed the studio’s first feature, Antz, knows his way around an animated universe and tries a number of potentially risky manuevers here, but he and the rest of the team haven’t really explored the enticing disconnect at the heart of the story; the cute protagonists are really our owners, packing us away in their version of a zoo all the way over in Australia. Sure, the Boov aren’t interested in enslaving us or eating us, but they don’t realize that humanity is intelligent and have engineered Australia as something akin to a petting zoo or animal sanctuary. Gratuity “Tip” Tucci (Rihanna), the film’s young hero, watched her mother snatched away in front of her eyes, and the film’s primary journey is one to reunite Tip with her mama (Jennifer Lopez). Her comrades in this sojourn are hefty cat ‘Pig’ and alien outcast Oh, who commits the ultimate “Send All” error, and alerts the Gorg that his entire race has succesfully relocated to Earth. Oh, voiced with excessive unawareness by Jim Parsons, is a curiously annoying little fellow; he’s not clued in to the fact his entire species is resistant to him, which consistently contributes to his awkward existence-threatening mistakes.

From Oh’s strange pidgin English way of speaking, an attempt to make him not just alien to the humans but a bit more alien to the aliens, to his capacity for clumsiness and misfit behaviors, he’s more than a little reminiscent of that amphibian king of fools, Jar Jar Binks from Star Wars: The Phantom Menace. To Johnson and Parsons credit, though, Oh is the kind of character Binks was probably intended to be; a bumbling innocent who eventually redeems themselves not just in the eyes of those who reject them, but in their own as well. It’s a tricky path to walk, but Home uses its character’s alien status to gain more leeway with the characterization and it works. Jar Jar, like everyone else in the prequel universe, was never provided inner depth and was only defined by the gibberish spewing from his mouth. As a result he came off as an insensitive and deeply irritating cartoon. Oh is a developed character, and as his personal issues become more intwined with the central story, the film itself improves and gains some stakes.

Parsons has been perfecting this kind of tightrope comedy on The Big Bang Theory for years, and with the assistance of the animators he’s crafted a character that seems genetically-bred for misunderstandings. The way the Boov move and behave set them up to not be taken seriously—even as they have smoothly achieved world conquest—and Oh’s individual gestures and ticks have set him at another remove altogether. Another Boovian, the heinously delusional Captain Smeck is voiced by Steve Martin, and the comedian uses his own gifts for droll faux-imperiousness to steal the show whenever the character is onscreen. Another clever scene-stealer is Pig the cat, who is completely in the hands of the animators. Tip is a fine character, and Rihanna does a decent job of voicing her and capturing her conflicting emotions towards new buddy Oh, but it’s the cat—with a series of increasingly endearing gestures and quirks—that is most effortlessly heart-warming.

My affection for the cat, those cool Boovian ships that run on slushee juice, and for an exciting sequence involving gigantic bubbles (also strangely reminiscent of The Phantom Menace) speaks to the way that Johnson gets a whole host of little details correct in Home. There’s an amiable and kind sense of fun to the whole thing, and that’s always an attractor for the family audience, but there’s real wonder and imagination missing from the final product. Here’s a kid’s film that starts with the world conquered and a young kid teaming up with one of the oppresors, who themselves is an outcast from an equally oppressed race, and somehow, it defiantly stays within convention and cliché. The faults aren’t in the original source material, which does some interesting things with the Tip and Oh (the alien goes by J-Lo in the book) relationship, but in the way that the film has been hastily mushed into the DreamWorks animated mold.

With the arrival of the Gorg, Home should take on a different, more intriguing dimension; here are the original conquerers who have forced the Boov into their new roles as alien overlords. That sort of relational domino effect could reasonably produce some sustainable and interesting drama, while speaking to the concept of outcasts more effectively than some simple, smarmy codas about understanding and respect would. Pixar, at a point in its career, would have made this a captivating and fresh take on alien visitor tropes. It is plausible that DreamWorks could have easily done so as well. They have painted themselves into their own kind of candy-coated reserve over the past few years—with only the Dragon flying free—and if they plan to survive in the animated galaxy, it’s time to really reach for the stars and stop coasting in the shadows of what’s come before.