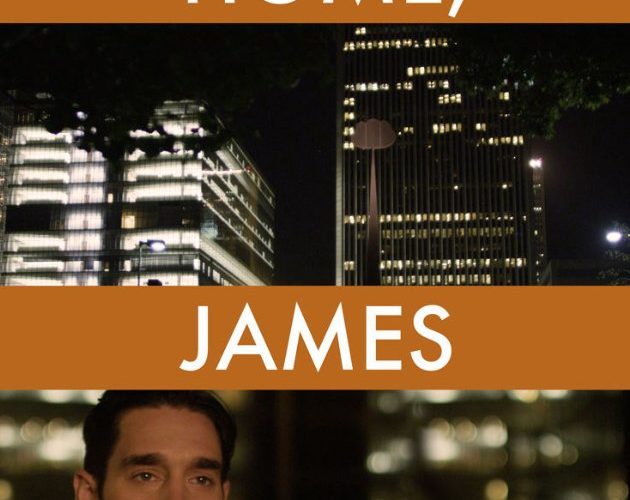 “We live in cities, you’ll never see on screen. Not very pretty, but we sure know how to run things,” says Lorde her hit Team. The opening moments of Home, James had me excitedly thinking about this single. We rarely see a film that takes place in Tulsa, Oklahoma, a city infamously memorialized in Larry Clark’s stark portraits published in 1971. Home, James, opening in the kind of limited release Manohla Dargis famously advocated against, is a film I’m conflicted about. Subtle, yet problematic, it never quite takes off but has several nice and interesting moments — truth be told, as far as films go, it’s no more shallow than the standard studio romantic comedies.

Home, James, directed, co-written and starring Jonathan Rossetti, is the portrait of James, a slacker who looks a little too old to be living on the economic edge. He’s a photographer who received regional rejection yet continues onwards. He makes ends meet by working in a local shop run by Larry (Marshall Bell) and assistant Sam (co-writer and producer Julie Gearheard), taking professional gigs and working as a sober driver taxi.

Early on, James meets Cooper (Kerry Knuppe), an alcoholic “socialite” who drives a beat up truck. She’s about to move to Brooklyn in ten days which means this is an ideal time (in a movie, anyways) to fall in love. James and Cooper continue onwards, often involving drinking evenings where James gives her a ride home. In the process a gallery who wants to give him a show discovers James, but is he really ready for this next step? Several of the performances are strong, including Geerheard’s spirited and quirky Sam and Knuppe’s Cooper as young women out of control. We are not sure if this is a low point in her life or if she will encounter the same problems in Brooklyn (its ending is rather bleak, although its resolution is quite emotionally accurate). Home, James does gives us a glimpse at a Tulsa that looks an awful lot like other places we never see on screen. Set in hipster neighborhoods full of dive bars and coffee shop/galleries it’s authentic, even if it could easy take place in really any minor city. Lensed by George Su, Tulsa is seen as the right mix of magical and dirty.

Home, James is the kind of indie I root for in spite of Manohla Dargis. Yes, there is an overload of films of its kind, but digital technology has made it possible for a piece of regional cinema to come out of nowhere — that is, if the gatekeepers let it in. If you think about the potential masterpieces we may miss because they do not fit the Sundance, South by Southwest, Tribeca mold, you’d be up all night. Home, James, I’m sad to say despite early promise, isn’t such a film and like James, Rossetti never quite finds his groove. A film about an artist should contain, or be interested in, the working process of that artist or his theoretic interests. I’m not sure James has an artist statement to display in connection with a future opening.

As far as it goes, perhaps there is something to be said of Dargis’ argument against vanity releases; self-funded via Kickstarter, Home, James is also being released independently released on a limited base in Brooklyn, LA, Tulsa and Portland where it will likely be seen by the same folks that support it. It takes a village, and while it doesn’t quite work on the whole, in spite of authentic moments, Home, James will hopefully be a model for regional filmmakers.