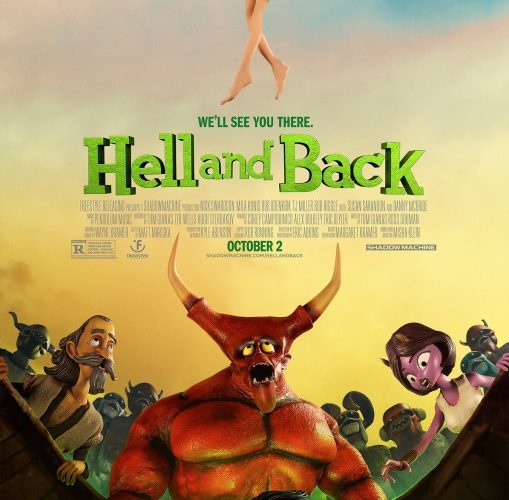 [Review] Hell and Back

You may have noticed posters for the R-rated, stop-motion animated comedy Hell and Back throughout the summer and fall seasons in anticipation of its October release only to find it didn’t come to a theater near you. It was released and took in about $150,000 on the few screens it graced to the chagrin of a ton of hopeful Nick Swardson fans complaining on the movie’s Facebook page about their inability to watch. So this week brings with it a belated VOD Christmas gift for many. To all those who believe themselves one of these brave souls chomping at the bit, please look deep inside yourself and really ask whether Swardson is your God because his being merely a passing chuckle won’t be enough to save you. The brainchild of Human Giant creator Tom Gianas (who co-directs with Moral Orel and Robot Chicken art director Ross Shuman), Robot Chicken writer Zeb Wells, and credited toy wrangler Hugh Sterbakov, Hell and Back is targeted at a very specific subsection of America’s comedy-loving public. I’m not a member—which isn’t to say I haven’t enjoyed a few Robot Chicken skits. Maybe if this project were a series of minutes-long laughs it’d be tolerable too, but as a feature-length rape joke chock full of easy racist, sexist, and boring gags it’s somewhat infuriating. I was thankfully able to expel a huge sigh of relief after learning animation house ShadowMachine was behind the writers’ former shows too considering they spent a lot of time bringing this tale to life.

I couldn’t reconcile why a production house expertly-versed in the painstaking process of stop-motion animation would agree to devote a year-plus of their lives to a script making light of so many heinous acts—a project I’m now surprised made it to enough theaters to earn the $150,000 it did. Knowing their familiarity with the subject matter and lowbrow humor lets me breath easy because they weren’t duped. That means something. They obviously felt as passionate as the writers about this film and the sprawling cast of recognizable comedic actors proves there’s a market for a female character asking a male character if he was dressed like a bush and “asking for it” when raped by a tree. The budget certainly didn’t make Mila Kunis say it. Such a line in hindsight makes me chuckle because it is so absurd, but Hell and Back practically hinges upon just such jokes. It’s not about sprinkling in an off-color laugh or delivering one as some sort of commentary on the state of America and the tragedies many innocent people face on a daily basis—this stuff is Gianas’ and company’s go-to move. They are grotesquely ageist about a wrinkled fortuneteller named Madame Zonar (Kerri Kenney) because they wrote her in to be grotesquely ageist. This character adds zilch to the plot besides being a butt of jokes and the same goes for almost everyone. There’s no need for second lead Augie (T.J. Miller) to be fat except for the filmmakers love of giggling at fat jokes.

It’s too bad because the bones are actually pretty cool. First off: I love the art direction. The character design of the Devil’s (Bob Odenkirk) minions is cutely horrific, the detail that goes into each frame is astounding, and the movements of people and objects is fluid to an impressive level of craftsmanship. Secondly: I liked the main plot dealing with Remy (Swardson) and Augie having to go to Hell to save their BFF and dilapidated carnival co-worker Curt (Rob Riggle) from eternal damnation. It’s hardly unique, but there’s room for flourishes like the Devil’s secret girlfriend Barb the Angel (Susan Sarandon) using her alluring wings to play him for a fool or Greek hero Orpheus (Danny McBride) drawn as a lecherous douchebag in it for sex. The initial pitch has potential for more than a boys’ club monetizing rape culture to fill their pockets. But look at the four female characters as introduced instead: Barb’s a whore angel—written with a sense of empowerment that might have been commendable enough for Sarandon to agree to the role; Zonar’s a known cougar; Durmessa’s (Jennifer Coolidge) pretty much an X-rated Ursula; and Kunis’ Deema, while our main heroine despite not showing up until the film is half over, is rendered so her nipples are perpetually seen beneath her t-shirt. I get that there are an inordinate number of teenage boys who eat this crap up, but should anyone condone such by greenlighting work that pretty much tells them they’re correct in sexualizing women as a rule?

No. A script like this should be destroyed upon receipt. And I’m not saying that because I can’t handle a dirty or offensive joke—there’s tasteless with purpose and there’s tasteless via laziness. Hell and Back is the latter and that reality only makes the finished product more disheartening since almost every other aspect is worthy of some praise. In the end, though, I’m not even sure I could recommend someone watching for the animation whether it deserves artistic acknowledgment or not. Yes it’s a labor of warped love that lives up to its creators’ aesthetic and will probably turn a profit on VOD thanks to Adult Swim’s demographic waiting with open arms, but it isn’t good. It’s sadly a waste of some very remarkable resources.

Hell and Back is now available on VOD.