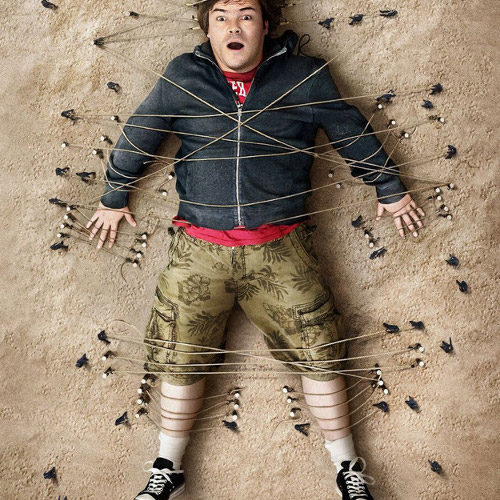 It’s tempting to copy and paste a review from a film critic I admire, after all in this modern day adaptation of Jonathan Swift’s Guilliver’s Travels, it’s an act of plagiarism that is the catalyst for Gulliver’s troubles. He finds himself on assignment in Lilliput, a land of 6-inch humans speaking in British accents. For this to be a true modern day adaptation, with the satirical objectives of Jonathan Swift’s original, Gulliver would have to find himself transported to a modern day mini-Middle East. So dangerous a mix, a producer with that pair of balls (and perhaps stupidity) might as well hire Mel Gibson to play Gulliver, but this isn’t atomic Swiftian satire so much as a fun family-friendly 3D comedy.

As far as family friendly diversions go, particularly around this season of Oscar bait and mediocre studio counter programming, this is a pretty good diversion: Jack Black plays the goofy and portly Gulliver. Working in the modern day rat race of New York City, the film’s title sequence brilliant photographs New York City with a tilt-shift lens making objects appear like an HO scale model train set. Gulliver takes great pride, as he briefs his new mailroom colleague (Yogi Bear and She’s Out of My League’s TJ Miller) that they should been seen and not heard. Gulliver harbors the required crush on the Darcy, the travel editor (Amanda Peet), and after impressing her with his “writing” – copied and pasted from Time Out magazine, she assigns him to a puff piece.

Traveling through the Bermuda Triangle, Gulliver finds himself captured by General Edward (Chris O’Dowd) and his army on the shores of Lilliput, imprisoned he meets his side-kick Horatio (Jason Segel) who is imprisoned for courting General Edwards’s girl, Princess Mary (Emily Blunt). Gulliver and Horatio get in the royal family’s good graces after Gulliver rescues the king by extinguishing a burning building and helps Horatio save Princess Mary.

As a reward Gulliver is built a giant sea front condo complete with a screening room where royal subjects reenact scenes from Guilver’s “life” – including the time he drowned after the Titanic sunk, and the time he fought Darth Vader. As a fantasy the film works: it’s vibrant and contains a detailed production design. As far as I can tell much of the special effects work, while not the most sophisticate, has a simple old school aesthetic. The camera really doesn’t move in anyway in the CGI world that it couldn’t do in the real world.

The performances are fun and energetic, with separate dramas playing out in the miniature and human scale worlds. Gulliver, who could never take advice in New York City, coaches Horatio in courting Princess Mary with Prince lyrics (“You don’t have to be rich to be my girl, you don’t have to cruel to rule my world”). The screenplay is loaded with contemporary pop culture references courtesy of Joe Stillman (Planet 51) and Nicholas Stoller (Get Him to the Greek), presenting light parody, more than outrageous Swiftian satire.

Director Rob Letterman has previously worked in computer animation, directing two uninspired features for DreamWorks: Shark Tale and Monsters Vs. Aliens. Rather than take the cartoon approach another filmmaker might have, the film’s aesthetic and 3D reminded me more of a pop-up book with several flat layers: this is not a knock, but rather I appreciate the simplicity of Gulliver’s Travels, a throwback of sorts to the first Hollywood films to use split screens and miniature sets. Save for a few digital helicopter shots, this film could have been made in a time before CGI regrettably became one of the most important tools in film.