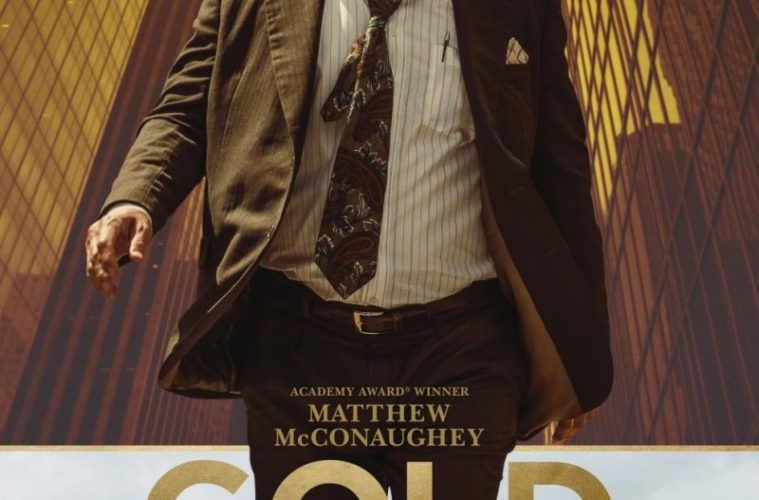 Review: ‘Gold’ is a Tedious Drama With a Dull Perspective

You’re likely unfamiliar with the Bre-X mining scandal of the 1990s. Gold is counting on that. Like A Beautiful Mind, it’s built itself wholly around a big twist, despite being based on real events which anyone could look up. However, the twist in A Beautiful Mind works because it helps the audience understand how the protagonist can’t trust his own point of view. When John Nash realizes that he’s been hallucinating several other characters, we can understand his disorientation. But Gold’s twist carries no weight because it comes from the movie being told from precisely the wrong point of view.

It’s unavoidable to talk about this without spoiling the plot, and while that usually isn’t a big issue with based-on-a-true-story films, Gold loses a lot of the impact it’s trying to make without the surprise. So if you want to get the most that a weight-gained, uglied-up Matthew McConaughey can offer, steer clear.

Bre-X, a mineral company, seemed poised to make history when it announced a major gold strike in the jungles of Borneo. Its stock soared, every trading company wanted a piece of it (with one attempting a hostile takeover), and Indonesia’s Suharto regime (of The Act of Killing and The Look of Silence infamy) even got a piece of the pie. Then it turned out that the gold samples taken from the site had been fabricated by the project’s geologist. The companies that had invested in Bre-X lost billions. Capitalism at its finest.

Now, there’s an obvious angle to take here: follow Édgar Ramírez’s character Michael Acosta, based on the fraudster Bre-X geologist. Watch as he decides to pull one over on some greedy Americans, how he concocts his scam, how he has to spin increasingly elaborate lies to maintain it. There’s tension and drama there. Instead, the story is about Kenny Wells (McConaughey), the first investor in the mine who “discovers” the gold along with Acosta. He’s duped until almost the end of the movie. Which means that for nearly two hours, we watch little besides Wells get richer and richer, with naught to stand in his way. However tedious you imagine this to be, rest assured that Gold is worse.

What we once called the McConaissance rode on the man playing a string of desperate, wily figures, perhaps best exemplified by the role that won him an Oscar. If nothing else, and there really is nothing else of worth in that movie, he’s a convincing lean wolf in Dallas Buyers Club. In Gold, McConaughey is best in the early scenes, his cosmetic transformation helping him evince end-of-the-rope doggedness. And once Wells is riding high, his cockiness shines through. But McConaughey made more of an impression as a stock-trading bro in his single scene in The Wolf of Wall Street. Here, there’s not even anything compelling about his fall.