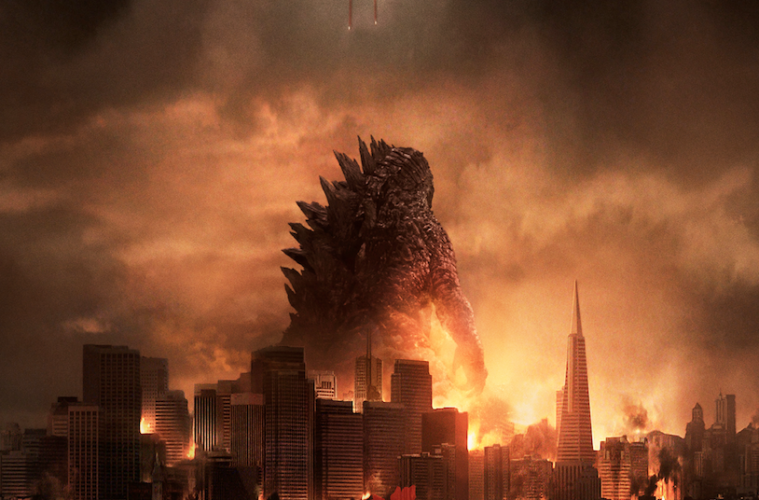 With ballooning budgets, waning attention spans and constant pressure to deliver the best (or rather the most) CGI, Hollywood’s contemporary crux on throwing everything at the screen for as much of the runtime as possible has led to an inundation of watered-down, homogeneous tent-poles. While this regrettable trend will undoubtedly persist due to reciprocating box-office receipts, Gareth Edwards delivers a riveting breath of fresh air with Godzilla.

A reboot of the same property that was last grossly mishandled less than two decades ago by Roland Emmerich does not seem like the finest starting point for a creative bout of originality. However, the British director effectively takes the world and character-building skills he learned on the miniscule-budgeted Monsters and expands them to a nearly unfathomable multiple with this $160 million production. Opening with a documentary-style montage highlighting the government cover-up during the nuclear tests in the Cold War (aka when Godzilla initially emerged), Edwards kicks off the events at a propulsive pace that wonderfully escalate all the way up to the final shot. Much of the credit goes to the director’s carefully thought-out design in not only the production, but specific camera movement. In an aforementioned studio system that so heavily relies on playing all their cards at once, Edwards’ restraint is half the fun — the other half being the fully-satisfying climax.

Whether it’s a moment when we initially briefly see a monster and the camera racks focus to move down to uneventful security footage or when the first major battle occurs and we cut to a second-rate news station broadcast of the footage, Edwards intricately (and amusingly) has carefully engineered a monster feature without a great deal of the main attraction for much of the first two acts. Nodding to Jurassic Park in more ways than one, this sort of control will surely make some audiences unnerved, but the thoroughly designed build-up leads to a massive-scale, combat-filled finale, one that’s all-the-more effective due to this carefully-orchestrated ascent. The backbone of thrilling action and elaborate set-pieces are the human characters, which shouldn’t come to a surprise if one has seen Edwards’ debut. The emotional core of the drama lies with physicist Joe Brody (Bryan Cranston) and his extended family, including wife and colleague Sandra (Juliette Binoche), as well as their son Ford (CJ Adams). Opening in 1999, both Mr. and Mrs. Brody work at a Japanese nuclear power plant, but after “seismic” activity leads to a disaster, we flash forward 15 years. Cranston’s character, played with the sort of gruff intensity one might expect from the actor, is now embroiled in the government’s cover-up conspiracy, for he knows the truth that it was no earthquake.

Meanwhile, Ford (now played by Aaron Taylor-Johnson, who delivers a serviceable performance as an audience cipher for the destruction that will unfold around him) has recently returned from service with the Navy, an expert in locating and defusing bombs. He briefly reunites with his family, wife Elle (Elizabeth Olsen) and young son, but is soon called to bail his father out of his latest legal mishap in Japan after being consumed with proving the truth of what occurred 15 years prior. Revealing any more of their specific arcs would ruin much of the entertainment, and while they convincingly play out their struggles during the creature-centered war, the rest of the supporting cast doesn’t quite measure up.

Military commander Admiral Stenz (David Strathairn) is adequate but generically crafted, while the largest disappointment lies with scientists Ichiro Serizawa (Ken Watanabe) and Dr. Vivienne Graham (Sally Hawkins), both relegated to exposition delivery. While Watanabe’s character has a bit more to do with the backstory, Hawkins feels like nothing more than a pawn to step in when the former is done saying vague, all-encompassing one-liners. Gratefully, their lack of compelling functionality in doesn’t wear down too much of the overall proceedings. Aided by Alexandre Desplat‘s vigorous score and Seamus McGarvey‘s fluid, elegant cinematography, Edwards has crafted something of a miracle with Godzilla. Given the rare opportunity of well over three years to develop, shoot and complete post-production, the film is a testament to the belief that a truly imaginative voice can bring originality to even the most well-trodden material.

Not much has been said about the title character, but without divulging any more than Edwards clearly wants hidden, the monster’s presence looms large from the opening and when it’s Godzilla’s time to shine, an immaculately detailed bout of grand destruction is had. Injecting empathy into the reckoning force that is our anti-hero, the visual pay-offs (aka the numerous “money shots”) are some of the most rousing and euphoric in recent memory.

Where last summer’s similarly themed kaiju tentpole Pacific Rim so monumentally failed at building a convincing world outside of the whiz-bang effects, Edwards makes sure every calculated moment pushes the story forward, successfully melding real-word practicality with otherworldly creature-filled pandemonium. This is all done at a breakneck pace from the get-go that, for the most part, doesn’t short shrift its characters for visual spectacle, but rather intertwines them in one of the most accomplished, entertaining summer blockbusters in years.

Godzilla opens on Friday, May 16th.