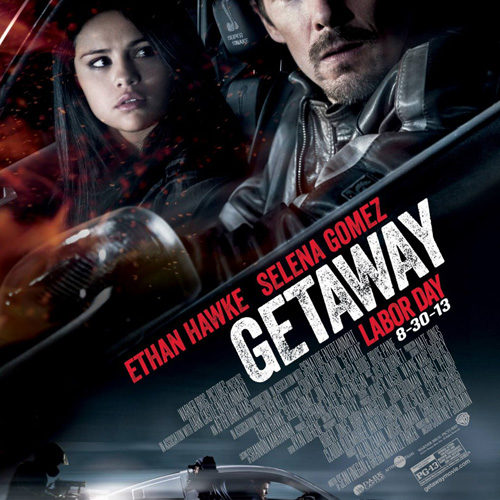 The Oscar for Best Actor goes to Jon Voight‘s jowls. Supporting? That would be the high-definition salt and pepper stubble poking through the screen as he gulps martinis with olive chasers. But if you really want award-winning, give something to editor Ryan Dufrene because I have to believe he spliced together a record number of cuts in a feature-length film, despite Getaway only lasting 94 minutes. And if director Courtney Solomon storyboarded this thing like a guy with OCD from the start, well I’d let him take a share of the prize too. If you’ve seen the trailer you shouldn’t be too surprised to find out there’s literally nothing more to say than what’s alluded to in its two-minute tease. Ethan Hawke‘s retired racecar driver Brent Magna finds his wife kidnapped. He steals a suped-up Mustang to follow every word her aptly named captor—The Voice (Voight)—instructs. And young Miss Selena Gomez (The Kid) unwittingly (Or is it? *wink*) goes along for the high-octane ride of their lives on the streets of Sofia, Bulgaria. What more could you want besides two actors cooped up in what’s probably a fake automobile cab sitting on a studio lot with metallic wrenching and drifting wheel noises surrounding them?

When you’re driving down stairs, backing up through alleys while police cars smash into each other, and barely miss mowing down pedestrians just trying to have a fun night in the park, any authenticity as to distance and surfaces becomes less than necessary. The filmmakers did at least have the decency to keep us entertained with Voight’s hammy, cropped mouth performance, though. Listening to him giddily tell Hawke’s Magna to kill Gomez and cause the largest amount of damage possible is a lot of fun whether it’s meant to be or not. If nothing else it’s a good contrast to Hawke’s distressed husband about to have a coronary every time he thinks his wife is gone forever. Someone should have told him this was only a paycheck job. Yes, a lot of people worked hard on Getaway and besides the flimsily rehashed plot of 2002’s Phone Booth or any of its ilk—excluding Buried, because Rodrigo Cortés nicely tilted the gimmick on its head there—it definitely goes for broke. The money needed to destroy every single thing in frame for two-thirds of the run-time isn’t anything to sneeze at and the stunt drivers must have had a blast wreaking havoc. The whole is technically competent and even includes an uncut one- to two-minute sequence with a camera mounted on the hood of a car as it chases the bad guy’s SUV at extremely high speeds that proves edge-of-your-seat riveting. It’s a shame the time and effort to choreograph it was too exorbitant to carry through the entirety.

Instead, we’re unfortunately left with Hawke feigning calm focus as he pulls the emergency brake and drives one-handed when he says he needs two to survive while Gomez alternates between steely cool and shrieking teen depending on what the plot demands. They hate each other, they sympathize with each other, they hate each other again, and then they’re best friends. This isn’t rocket science and writers Sean Finegan and Gregg Maxwell Parker thankfully don’t pretend it is, until a final revelation surprises us solely due to the fact you never thought it could get more hamfisted and stupid than it already was. Getaway is a videogame—one at its best when realizing this truth. We want to be put into the action with a first person vantage. Don’t simply cut together disjointed close-ups so fast that our brains won’t be able to question continuity. We expect clichéd and lazy to the point of every single second being orchestrated by a brilliant mastermind who somehow doesn’t realize when his cameras are being looped and we know any thinking on our part will ruin every ounce of fun we might be able to squeeze from its loud exhaust pipes and screeching tires, so please don’t try to all of a sudden be slickly smart. You’re only shrouding it in more fabricated noise than it already was by cheapening what was bargain bin material in the first place.

And it’s not even worth commenting on the acting when Rebecca Budig‘s captured Leanne is the only one given something to work with, as far as showing real emotion. Hawke has his moments, sure, but he’s relegated to being the consummate professional behind the wheel while Gomez’s educated computer wiz takes half the movie to decipher that her partner in this escapade isn’t her enemy. I’ve already mentioned how amazing Voight’s mouth is—there’s really nothing more to say other than, “bravo.” They played their parts, picked up their paychecks, and probably went to the premiere to watch the visual smorgasbord of hyper-motion that surrounds its one brilliant scene of untouched artistry. They’re just hoping those checks won’t bounce after its two weeks (at the most) stay in your local multiplex.