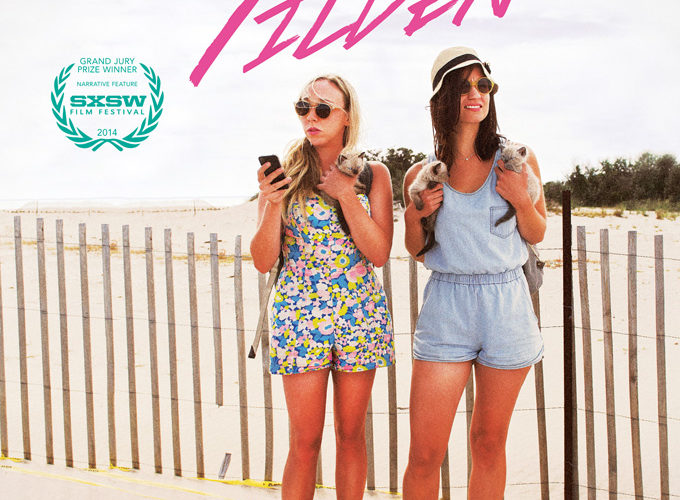 In the acerbic indie comedy Fort Tilden, Brooklyn denizens Harper (Bridey Elliott) and Allie (Clare McNulty) prepare for a day at the Rockaways, where they plan to rendezvous with two cute guys they met at a rooftop party. Before they depart, however, Harper declares the need to make the apartment “sex ready” and, to ensure approval from their potential conquests, strategically places a copy of Infinite Jest on the couch. The sight gag provides a rare moment of genuine laughter in an otherwise punishing skewering of parasitic millennials.

Since it won the Grand Jury prize at the 2014 SXSW Film Festival, the feature debut from writers/co-directors Sarah-Violet Bliss and Charles Rogers has generated buzz for its savvy, unapologetic Girls-like sense of humor (a notorious scene featuring kittens is especially rough, while an extended topless sequence confronts the viewer with its lack of sexuality). Besides the aforementioned nod to David Foster Wallace’s hip male appeal, the film rolls out jab upon jab at the young, shallow pseudo-creatives who treat New York as their own personal playground. As the main characters make their ill-conceived trek across the city, passive aggressive Allie uses the opportunity to avoid her Peace Corps obligations, while the self-absorbed Harper only has drugs and sex on the brain. Along the way, they interact with equally insufferable hipster stereotypes, including a gaggle of bitchy gay guys and two neo-domestic buzzkills, all while endlessly spouting inane, vapid nonsense.

Defined by a grating lack of subtlety, Bliss and Rogers’ script slings more than enough scorn at its unlovable protagonists in an effort to take down the maligned culture they represent. When an inspired Harper surveys the rundown streets of Flatbush, only to propose plans for a “dollhouse ghetto” art project, the moment, along with many others like it, withers under the weight of its own smirking commentary on white privilege. The film devotes so much time and effort generating bilious abhorrence for the two women that any attempt at redemption – Harper becomes the poor little rich girl desperate for her absent daddy’s attention, while Allie finally accepts her own selfish tendencies – comes off as completely unearned.

Not that the writing reflects on the film’s other qualities. The cinematography showcases the city’s quieter, lesser known areas – including the titular landmark – with an ever-mobile camera, and the leads manage to deliver some noteworthy performances. McNulty whines and whimpers as the mousey Allie, and serves as a perfect complement to Elliott, who plays Harper as a vicious, Veruca Salt- like brat prone to explosive, insult-laden tantrums. Their central relationship has drawn comparisons to Romy and Michelle’s High School Reunion, but Dumb and Dumber is a better fit. The set-up (a road trip motivated by a romantic pursuit), the broad comedic tone, and the twosome’s increasingly stupid antics render them less like Mira Sorvino and Lisa Kudrow’s bubbly It-girls and more like a Harry and Lloyd for the Williamsburg set – that they ultimately never learn anything only cements the theory.

Fort Tilden does some good by acknowledging how society continuously infantilizes girls and women, only to then mock them for being helpless (Harper’s father would rather throw money at his daughter than give her any real guidance). However, this more thoughtful element becomes just as exhausting as the millennial bashing, especially when it relates to the filmmakers’ self-satisfied attempts at cleverness. When, towards the end, Allie describes something as “tediously adorable,” the smugly reflexive observation caps off an already unpleasant, unfunny experience with nothing fresh or insightful to say.

Fort Tilden is now in limited release and on VOD.