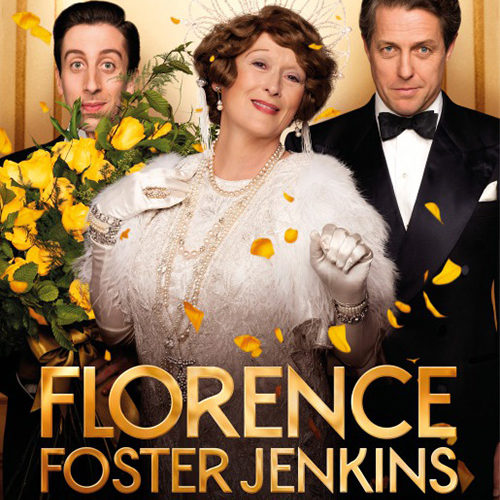 Florence Foster Jenkins is this year’s movie that your mom will love which, under its anodyne surface, is actually kind of morally abhorrent. Allegedly a tribute to devotion and the lengths to which people can go to make their loved ones happy, it ends up an unwitting glorification of the money-wasting vanity of the rich and powerful. And the film is awfully hypocritical, mining copious laugh moments out of the eponymous main character’s wretched inability to sing even as it tut-tuts people who attend her concerts only to mock her. Though the script has genuine affection for Foster Jenkins, and Meryl Streep does her level best to imbue her with humanity, it can’t balance empathy with an honest acknowledgment of her artistic shortcomings the way, say, Ed Wood managed so beautifully.

Florence Foster Jenkins was a wealthy heiress and socialite who was highly active in the New York City music scene throughout the first half of the 20th Century. A founder or member of dozens of women’s clubs, she leveraged her position to put on many private concerts and recitals featuring herself. They had to be private, because only her friends/hangers-on would accept her uniquely terrible voice (don’t take my word for it; listen for yourself). The film focuses on her common-law husband, St. Claire Bayfield (Hugh Grant), as he scrambles to arrange such events while sheltering her from the harsh voices of reality. To this end, he enlists pianist Cosme McMoon (Simon Helberg) as her professional accompanist, much to McMoon’s constant bafflement. The plot thickens as private recordings of Florence singing leak to the outside, and culminates in her only public concert — at Carnegie Hall, no less. Imagine how many supremely talented musicians dreamed their whole lives of such a thing, but died in obscurity for one reason or another, while a singularly talentless woman got to do it solely because she was rich.

Of course, Florence Foster Jenkins has harsh words for any parade-rainers who would bring this up. Bayfield righteously lambastes a critic walking out of one performance, declaring that Jenkins has done more for music than anyone else in the city and thus “deserves” to be humored by thousands of people. Then he offers the critic hundreds of dollars in hush money, which is denied. (Mind you, this is in the midst of the belt-tightened homefront of World War II. This is the most heroic critic character who’s vilified by their film since Birdman.) If this were a stealth critique of capitalism delivered via a parody “inspirational” film, it’d be brilliant. The movie itself urges us to give Jenkins a break because she’s lived with syphilis for 50 years and just loves music so much, so come on, why be mean to her? (And then it has Streep screech out a particularly horrid stretch. This movie’s treatment of its lead is ridiculously schizoid.)

While I don’t believe in criticizing any based-on-a-true-story film for its historical inaccuracies, I do think it’s worthwhile to question what it says through what it changes from the facts. In real life, Jenkins seems to have been fully aware of her own, ahem, “limitations,” since she had an active role in hosting her concerts, ensuring they were invitation-only, and paying off willing critics while keeping real critics out. This is a far cry from Streep’s pure, guileless heroine in this film. It also hefts all of the actual story-driving actions onto Bayfield, leaving Jenkins more of a plot device than anything else. When, in Bayfield’s absence, she and McMoon make their own recordings, it comes across less like her seizing initiative in her life and more like an unchecked force of nature inevitably taking its course. Rather than rehabilitating her image, this is actually insulting to her agency as a human being.

So Grant is the true lead here, and to his credit, he turns in what’s probably his best performance since About a Boy. The movie makes a generally half-baked attempt to imitate ‘40s Hollywood, and Grant is the only element that feels truly old-fashioned. He’s full-throated in his alternately assured and soulful masculinity. Meanwhile, it’s not entirely clear just what Helberg is trying to do. His McMoon’s restrained, high-voiced giggliness often makes him seem more like a serial killer trying desperately to keep from stabbing everyone else in the room than anything else. Nina Arianda is also in there as a moll with a thick-ass Noo Yawker accent, so that’s great. Rebecca Ferguson is also in there. Yes, she is certainly in there. Reading lines. Performing actions. Expressing emotion. Certainly in there.

Florence Foster Jenkins is nice, but only in the way that any undeservedly wealthy person considers themselves “nice” when they give a pittance to charity while sheltering as much as possible from the IRS and spending extravagantly on themselves. Absurdly, the movie presents her giving away tickets for her public concert to a thousand soldiers as some kind of heroic act, even as it presents said soldiers as a mob of drunken louts who only gain solace from her performance via ironic appreciation. Her famous quote, “People may say I can’t sing, but no one can ever say I didn’t sing,” is a rallying cry for moneyed mediocrity everywhere. Defy it.